This week thirty years ago was the beginning of the end of my sexist dream of having women recognize me for being “a nice guy.” As I wrote in one of my very first blog posts a decade ago, it was a dream “that had to die.” Precisely because it was a fantasy, a phantasmic display of teenage delusion borne from five years of abuse and oppressive social immaturity. In ’80s parlance, my wack ass had to learn the hard way that I had no game. And, more importantly, that pedestals are meant for smashing with sledgehammers, as people can never live up to their marble or bronze busts.

It wasn’t really women I was trying to impress with my quiet and stoic demeanor. I was all about my second infatuation, Crush #2, my version of Phyllis in the summer of 1987. I’ve outlined in painstaking detail here and in Boy @ The Window my obsession with Phyllis and her smile, and my ridiculously stupid attempts to make conversations with her in the three weeks of my various impromptu encounters at the old Galleria in White Plains and on the 40/41 Bee-Line Bus back to Mount Vernon.

But “the end of the lesson,” or at least, the “end of the beginning” of it (to quote both Kevin Costner in The Untouchables (1987) — which I saw at The Galleria twice that summer — and Winston Churchill), began on my brother Yiscoc’s birthday on the fourth Thursday that July. 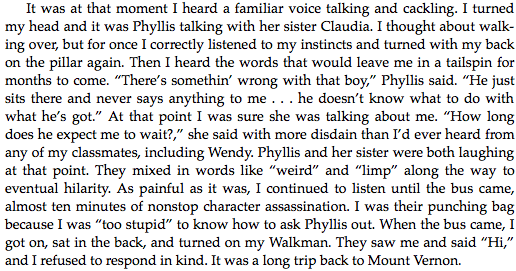 I walked around for over an hour after I got off the bus at North Columbus and East Lincoln. I must’ve called myself “pathetic” at least a dozen times on that hot and steamy walk. And I was. I didn’t get home to wish Yiscoc a Happy Birthday until after 8 pm, by which time I missed any semblance of a birthday celebration at 616.

Packing up and moving to Pittsburgh — and my freshman year at the University of Pittsburgh — seemed as far away that weekend as it did during my summer of abuse five years earlier. I was no longer sure that this transformational period of my life would actually bear fruit. I thought I was destined to spend the rest of my days alone, ridiculed, emasculated, and otherwise as a piece of trash. 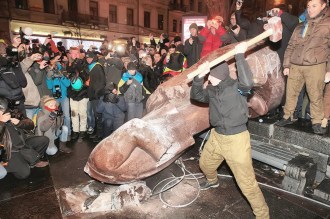 I was seventeen years and barely seven months old when I had those thoughts. I’ve been married for nearly that long, and have a son on the cusp of turning fourteen. There’s no way that Donald 1.0 could have envisioned either of these experiences, much less worked to make them happen. It wasn’t exactly a miracle that I became a boyfriend, fiancé, husband, and father. No, it was an evolution, with a couple of personal rebellions and revolutions mixed in.

The one good thing I did after Phyllis took a wrecking ball to my delusions of feminine perfection was to talk about it with someone who was willing to listen. This time around, a young woman put up with me griping about something I never had, someone whom was never for me to begin with. As many times as I would go on to listen to women of all stripes about their relationship issues, I needed to be on the rueing end of things this one time.

It would take a lot more talking, a bit more learning, and four more years befriending and dating, before I’d completely give up putting women on pedestals entirely. Women may be beautiful, and Black girls may be magic, but none are meant to be worshipped at altars. Like all other anthropomorphized idols, humans on pedestals will always fail us when we delude ourselves into thinking that we need them to be free. Especially when we need them the most, or at least, believe so.

This week marks three decades since I finally entered the ’80s technologically, buying my first portable radio/cassette player with headphones. It wasn’t the Sony Walkman — I’d get my first one of those a year later. No, it was a Taiwan-made knockoff that I got at Crazy Eddie’s on 46th and Fifth in Manhattan, on sale for $22, that was my jump into the era of the Walkman. After a year and a half of carrying around a plug-in radio, playing with records on cheap $15 turntables (that cost $130 and much more in 2016), contemplating boom boxes, and having no control over what music I listened to outside of laundromat runs and 616, I found a new way to escape.

As I wrote in my memoir, this new toy was

my passport to another world, a world where I could make anything happen and no one could hurt me. Taking the Subway to go to The Wiz or Crazy Eddie’s or Tower Records was as much a part of mine and Darren’s Saturday ritual as our tracking down of Jimme. I no longer had to wait for WPLJ or Z-100 or WBLS to play the music I wanted to hear. I could buy a cassette tape for as little as six dollars. In the month after I’d bought my Walkman I’d gone out and bought more than twenty tapes. Whitney Houston, Simple Minds, Phil Collins, Sting, The Police, Mr. Mister, Mike + The Mechanics, Tears for Fears, even Sade. All were welcome who could contribute to my all-consuming effort at conquering my courses.

I was tough on my first Walkman, though. I must’ve dropped it a dozen times in two months, as it barely made it to Memorial Day ’86. My second one was a $42 Panasonic, which I bought with my Technisort earnings, and it lasted from July 4th until the end of October. I bought a decent Aiwa knockoff of the Sony Walkman in December, and that one made it to April ’87. before I finally found the $60 I needed for my Sony Walkman the month before high school graduation.

In a span of a year, I would accumulate more than seventy tapes, covering everything from pop and hard rock to rap and R&B, new age and jazz. As anyone who knew me in the spring of ’87 could attest, I carried my tapes with me in my book bag to have at the ready, the same way in which I had toted my Bible everywhere when I became a Christian three years earlier.

I walked everywhere in the Upper Bronx and Southern Westchester County for nearly three and a half years before I bought a Walkman of any kind. But in that window between March ’86 and my college move to Pittsburgh seventeen months later, my walks became much more frequently and much more eventful. I was walking to escape, to find mental space away from the gang of under-five-year-olds that ruled the too-small, two-bedroom space of pain in which I had grown up. I walked to figure out who I was and who I wasn’t, to be angry at my family, at the world, and at myself. I walked to find meaning in a chaotic life and world. I walked because I could wear myself out with warp speed, spin moves and high-falsetto highs, with questions and emotions and sometimes even, some answers, before coming back to 616 and grabbing some sleep. I must’ve have gone on 100 or 150 walks of five miles or more in that year and a half before college.

Inception (2010), Paris dream construct screen shot, April 27, 2012. (http://dpmlicious.com). Qualifies as fair use under US Copyright laws because of poor resolution of shot, not intended for distribution.

That doesn’t even count my more frequent forays into the city, not to do anything or be anything. I wasn’t working for my father anymore, and after he repeatedly called me a “Faggat” in August ’86 and tried to set me up with a prostitute in December ’86, I hardly went to see him at all until the last few weeks before leaving for Pitt. I didn’t even take Darren down to Midtown Manhattan, the Upper West Side, Harlem or Flatbush with me. That’s what I did with the spare hours I started stealing from my Mom on weekends during that year. I’d go down to the city, maybe buy a few tapes at Tower Records on 66th and Broadway (usually not, since most of my tapes came via Terra Haute, Indiana). Sometimes if I had a few dollars, I’d go to MOMA or Radio City or some other place and go into escape/observation mode there. Mostly, I walked and people watched for an hour or so, and then take the long way home between the 2 train, 241st Street and the heart of Mount Vernon.

All the while, my music was on, often at full blast. It was a coping strategy, a pain and stress reliever, my sword and my shield. It took my Phyllis obsession and my freshman year at the University of Pittsburgh to break the link between music, Walkman, and the need to escape. It took the pain of rejection, removal from an anti-Donald environment, and a bout of homelessness to make music about enjoyment and education. When that happened, sometime in ’88, I knew I couldn’t escape anymore.