I hate bullies. There, I wrote it. There aren’t too many things I hate more than bullies. Because bullies are the ultimate liars. Their presumed strength is a mask for the same insecurities the rest of us humans have. Only, they’ve decided that beating up on others physically, verbally, and emotionally as the solution to their fears. The only way really to deal with bullies is to stand your ground and beat them into submission. Or, if you can’t win the fight, to make the fight so vicious and bloody that the bully would rather die than fight you again.

I was robbed four times growing up between age nine and a few weeks before my 14th birthday, all in Mount Vernon, New York (so much for my parents’ worries about me being out late at night in the Bronx or Manhattan!). Two of the four robberies were full-fledged muggings, where I had to fight. Two of the four robberies, my older brother Darren abandoned me with bags of groceries (April 1979) or three bags of laundered clothes in a laundry cart — seven people’s worth — (October 1983).

That next-to-last robbery was a calculated one. I was literally walking uphill near the Hutchinson River, about to cross the bridge over the parkway of the same name, with an overloaded cart and no help from Darren. As I strained with between 60 and 70 pounds of clothes in the cold and dank fall weather on this rickety cart that I had to pull from behind (no front facing wheels), Darren walked back toward me. Two wanna-be-hard-asses were a few steps behind. “They want you to give ’em five dollars,” Darren said, as if I was in the charity business.

Now the taller one was behind Darren, the shrimp to my left. After years of basic Isshin-ryu karate training and two years of taking my everyday bully, er, stepfather Maurice’s punches, kicks, and chokes, I could have easily taken the shrimp. But Darren, as he had done in my first mugging four years earlier, had fled the scene. My  choices were to fight and risk scattering and ruining six weeks’ worth of clean clothes for me, Darren, Mom, Maurice, and my three younger siblings, or give them the five dollars. I did the latter. “That’s the last five dollars you’re ever gonna get from me,” I said to the shrimp while gritting my teeth. He sneered, but when I stepped toward him as if I was going to hit him, he stepped back.

I never expected Darren to help me with anything after that. This was when I began to say, to anyone who asked about my positioning in the family, that I was the oldest brother by default. “Well, I’m actually the second oldest, but my older brother abdicated the throne when I was 12 or 13,” I said with sarcasm for the next 20 years after that day. Including on my college essays!

That shrimp’s name was Reggie. He was among a group of roving bullies from 616 and 630 East Lincoln and the Pearsall Drive projects in those not-so-long-ago days. Reggie had been robbing folks for years, stealing money and candy from ten and eleven-olds, trying to crack on boys for being “ugly,” talking shit to girls like they would give his Vasoline-needin’ ass the time of day.

I’m not going to lie. People like Reggie scared me when we first moved to the roughest part of North Side Mount Vernon in 1977. After being sexually assaulted the year before, pretty much everything scared seven-year-old-me. But that was before the Reagan Years, the Hebrew-Israelite years, before getting my head caved in and my ribs cracked and bruised by a 32-year-old bully, a fourth-degree black belt in leeching off a welfare-poor family, my mother’s second husband. It was before puberty had shot me up from five-two to six-feet even, and with a recognition that I had some physical skills. So no, my biggest fear that day wasn’t being robbed, mugged, or even standing up for myself. It was dealing with Maurice afterward.

Five or six months after I handed him an Abe, Reggie finally got his. It was after school, sometime in late March or April 1984. The Reggie incident was now long forgotten under a pile of high school assignments, my post-suicide attempt conversion to Christianity, and plotting another round of resistance against my idiot stepfather. As I stared out the second bedroom window on the third floor, toward the northwest corner of the A block of 616, a mob of preteens and teenagers, between 20 and 30 in all, surrounded Reggie the shrimp and another, lighter-skinned kid who had also shot up in height in the past year. It dawned on me later that the older Reggie was either still stuck in middle school or a high school dropout, but it wouldn’t have mattered to me if his mama dropped him on his head when he was three.

Words turned into fists as the crowd swelled into a rough circle. I could hear the taller kid’s (lets call him KJ) fists land hard on Reggie’s cheeks and the left side of Reggie’s jaw, as KJ threw what we would now call an MMA combination that landed Reggie’s short ass in the dirt and sparse grass of 616’s front yard. KJ then pounced on Reggie and beat him in the face and torso until the shrimp curled up. I don’t remember what the freshly-minted teen yelled at Reggie as he stood over him like Ali over Sonny Liston, but whatever he said, the crowd of kids cheered and celebrated. 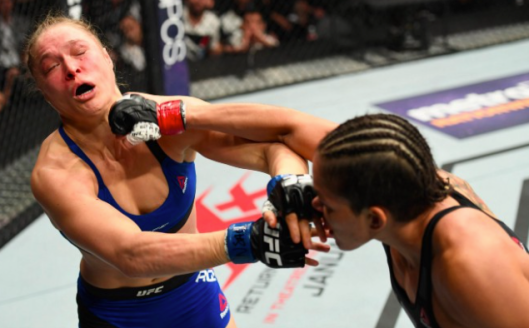 Reggie, bloodied lip, bruised from forehead to belly, with dirt and grass and straw in his hair and all over his clothes, all but cried as he stood up a moment later. By then, the crowd had followed KJ to 630, or gone home somewhere between 616, 630, or to their single-family dwellings on the other side of the street, or to the Pearsall Drive projects at the end of the long block. He somehow looked even darker, shorter, and more diminished than he did when I jerked at him as if to hit him five or six months earlier. As much empathy as I can have for the vanquished, I had zero empathy for Reggie at all. The only wish I had at that moment was that I had joined in with KJ and swung-kicked some teeth down Reggie’s mf-ing throat.

This is how we should all deal with bullies, like 45 and his minions. Not with empathy or with regard to what in their backgrounds helped make them this way. That comes later, when we have a chance to implement for the long-term. No, the immediate threat is a bully who taunts and grifts and threatens. You beat the shit out of that person, or make it so that their victory costs them so much that it feels like a defeat. After all, this is about self-preservation, survival, and harm reduction. Or to quote Val Kilmer’s Doc Holliday from Tombstone (1993), “it’s not revenge that [we’re] after, it’s a reckonin’.” We need a reckoning this time around. Thanks, KJ, for showing the way.