My favorite scene from Michael Clayton (2007) is when the title character’s brother Gene (played by Sean Cullen) confronts Michael (played by George Clooney) about the past seventeen years of his career as a fixer.

About a year and a half ago, I figured I could insert the words “writer” and “scholar” in those lines, with twenty years of my career(s) for context, and maybe some of the meaning would be correct. I am a writer’s version of Michael Clayton. I’ve got academicians thinking I’m a unscholarly writer, and journalists and editors who think I’ve only written for scholarly audiences. What a mess!

Last year, after receiving a rejection for a version of my article about American narcissism, American racism, and why real conversations on race (whether through Clinton’s Race Initiative or via Ferguson) are all but impossible, I decided no more. I will not seek to submit another scholarly piece to a peer-reviewed scholarly journal ever again. And if asked, unless it’s something I truly feel passionate about, I will say no.

Do not think of this as sour grapes. I have published two full-length journal articles in my career, not to mention a bunch of the standard book reviews, and an op-ed for Teachers College Record in the past. Technically, I am 3-for-11 in publishing academic articles over the past two decades, not great, but hardly abysmal.

My issue is with the elitism and implicit bias that is rampant in the publish-or-perish world of academia. While some folks could argue it is the same in publishing in general, it really isn’t. The unwritten rules in publishing, if not followed, may well still lead to published articles, even if a person is starving and homeless in between. In academic publishing, not following the rules leads to ostracism, and a career dead before it ever begins.

Keep in mind, no scholarly journal pays authors for their articles. It takes about two years to go from submission to publication in most history and education journals. If twenty people read your article, that’s icing on a protein-powder cake. If you aren’t in the tenure-stream, though, it really doesn’t matter how many articles you publish, because it doesn’t provide job stability or security. As a former nonprofit administrator, it scared most of my supervisors whenever and wherever I published, so no benefits there either. For those in tenure-stream positions, it does matter, no matter how crappy the research or how densely unreadable the writing.

After twenty years in the publishing struggle, it’s time to face the truth. I simply wasn’t good enough to publish in academic journals. I’m not talking about my writing ability or research skills. I’m pointing out my eclectic career path, my lack of tenure at an elite university, with few to vouch for me when I was younger and an up-and-comer. My interdisciplinary research on race, on multiculturalism, on education, meant that I was a misfit from day one. Heck, I know for sure in at least one case, a journal editor held my race and age against me. 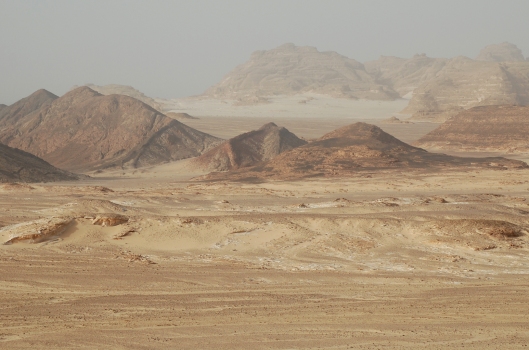 Sinai Desert, where Moses, the Israelites (and I) wandered for a generation, Egypt, March 9, 2010. (Tommy from Arad via Wikipedia). Released to public domain via CC-BY-SA 2.0.

I know most of the academic writing rat-race is a system of exploitation based in part on fears of joblessness, loss of prestige, and elitism based on class, race, gender, and whether one teaches at an elite university or at a community college. It is based on an academician’s ability to blame themselves and themselves alone for their failings, and not the oppressive publishing system itself. Kind of like the poor blaming themselves for their poverty. Or Whites and Blacks blaming other Blacks for a degenerative culture instead of looking at systemic racism as the real culprit for racial inequality. Academia is very much in and of this wider world of social injustice and oppression, no matter how university presidents attempt to spin it.

Truly, I find the idea of a cold, objective, dispassionate, dense writing style as more serious and scholarly than any other form to be high-grade bullshit. It’s what folks in academia tell each other. Just like many a journalist and editor is a frustrated writer looking for creative and book manuscript-length outlets, many a writer in academia believes their writing (and as often as not, their research) to be much more than it is.

But the biggest issue for me was my elitist and naive attempt to straddle the fence between academic publishing and writing for wider audiences. This living in two worlds began for me during my heady days, my grad school years at both the University of Pittsburgh and Carnegie Mellon. Some of my history professors, like Paula Baker, Kate Lynch, and Joe Trotter, all tried with a considerable amount of frustration to get me to write in more scholarly tones. Others seemed to be fine with my writing style. I had a tone that was too “journalistic,” according to my racial paternalistic professor Dan Resnick, who meant it as an insult.

Between 1997 and 2002, I churned out eight full-length pieces (in the 20-35-page-range) on multiculturalism and Black education/history meant for peer-reviewed scholarly journals, four of them between February and December 1997 alone. None of them were ever published. One, an admittedly ambitious state-of-the-subfield piece on multicultural education and its history in American education, elicited a response from the History of Education Quarterly’s editor-in-chief. He was my one-time professor during my first year of graduate school at Pitt, Dick Altenbaugh. Him and his managing editor met with me for nearly an hour and a half in March 1998.

Some of the meeting was about the deficiencies in my article and in my argument. But most of the time was about my writing style, my ambitiousness, and quite frankly, my age and race. I wrote about some of this in Fear of a “Black” America. Apparently, at twenty-eight, I needed to be in my mid-40s to write a grand essay on multicultural education. Allegedly, I needed long-retired (and in one case, dying) White scholars to support my arguments, no matter what evidence I brought to bear. I needed, most of all, to stop being so ambitious about my work, and stick to more objective, run-of-mill, 181-variations-on-a-theme topics in the education field. Like what Karl Marx or John Dewey would have to say about ability grouping.

I gave up on academic publishing in 2002, at least on the topic of Black education/history and multiculturalism. I tried to write articles on everything from social justice movements to the fallacies of the liberal-conservative construct, on education, poverty and mythology of American social mobility, even on intersectionality. Only, I had worked so hard to make myself more of a scholarly writer. So much so that I now had to relearn how to write for more than fifteen people, and really, to write for myself. It took about a year to drop the 40, 50, and 60-word compound sentences, the use of inappropriately complex language, and the mask of dispassionate objectivity in my writing. Ironically, this was also when I published my first scholarly piece, on multicultural conservatism and Derrick Bell’s “Rules of Racial Standing,” in 2003. I also published my first solo op-ed, in the Washington Post, around the same time.

By this time, I saw myself as a recovering academic. I also had some unfinished personal business, around how I got to my mid-thirties, to this place in my life where I had “made it,” sort of, but I hadn’t escaped my past. This was where the story of Boy @ The Window took over, and why I have a memoir and nearly ten years of blog posts.

But because of my nonprofit work on college access and retention, two professors invited me and my team to submit a piece for publication in their journal. It was a four-person piece with me as the primary author (I wrote about 90 percent of it, so there’s that). The original invite was in June 2007, and the article came out in mid-October 2009. I had stopped working for the Academy for Educational Development, and found writing the article like a strait-jacket and a time-gobbler.

Michael Clayton (George Clooney) and a horse, a moment of truth, screen shot and crop, 2007. (http://chud.com).

After Boy @ The Window in 2013, I decided to write articles for a broader audience again. This time, I made the decision to take my memoir-writing experiences and apply them to my writing. I started writing about K-12 and corporate education reform, the problems in higher education, about racism in the Obama era, about poverty and its connections to race, gender, and current issues. And over the past two years, I’ve published more and reached more people than I could ever have done with an award-winning article in the Journal of American History.

So academia, you win. I give up.