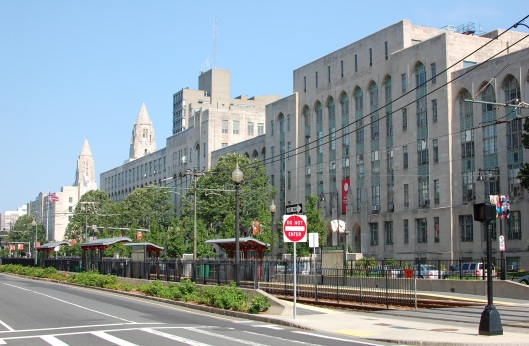 The main classroom buildings for the College of Arts and Sciences at Boston University, with the BU East ‘T’ stop in the foreground, July 18, 2010. (Fletcher6 via Wikipedia). Released to the public domain via CC-SA-3.0.

Since my first job working for my father in Manhattan in ’84, I’ve probably done over 200 interviews. By telephone, through Skype or WebEx or Adobe Connect, at conferences and in person. Probably about a third of those interviews have occurred with colleges and universities, for academic and administrator-level positions. For the most part, whether the interviews went well or when I didn’t have my “A-game,” my experiences have been pleasant ones. But, after two different interview processes five years apart with Boston University — one in October ’10, the other last month — there is a higher education institution that I will not work for, will not send my son, and will not recommend for anyone I know, under nearly any circumstances.

There are only a few institutions that have been so bad that they’ve moved from my [expletive] list to my permanently-banned-from-my-life list. Even Carnegie Mellon isn’t on the latter list, and I’ve talked about their conservatism and weirdness around diversity before here. But Boston University’s treatment of me as a potential employee, well, it took my breath away without putting me in an NYPD chokehold.

Let me rephrase. I was never a “potential employee,” because on the two occasions I interviewed for jobs there, Boston University in the end treated me as a checkmark interviewee. In the fall of ’10, I emerged for them as a candidate for the director of their Washington, DC program. They interviewed me three times: at the American Political Science Association conference in DC in August, at their old DC program headquarters (while also showing me their new one, still under construction) in September, and in person on the main Boston University campus in late October.

For that last interview, they pulled out all the stops. They flew me in, put me up in a nearby hotel the night before, and even took me to lunch. Of course, they also had someone give me a two-hour guided tour of the campus that morning, after one morning meeting, on a day with thirty mile-per-hour winds coming off the Charles River as we walked from one end of the campus to the other. It’s funny. Up until then, I never thought of a campus tour as sinister. But then I realized, if I’m spending two hours during the heart of the workday doing a campus tour with a twenty-four year-old BU grad in forty-five degree weather, what did that mean for my real chances at that job?

My final meeting was with a professor who advised political science and history major in the DC program. That meeting ended at 5 pm on October 22, with which I knew that they were supposed to make a final decision in a week or so. Despite a thank-you email and two follow-up emails, I didn’t hear from Boston University again until November 29. Roberta Turri Vise, the point person for my interview process, didn’t explain why the final decision took more than five weeks. Nor did she explain why after six weeks of correspondence, no response from my requests were returned by her or anyone else in her office.

I decided that this was a one-off thing, that with our generation of job searches occurring in a buyer’s market, that some folks really don’t care about being professionals in their dealing with interviewees. Boy was I wrong! Even in a market where people ignore applicant materials and send mass rejection emails without a candidate’s name on it (or worse, with someone else’s name), Boston University claimed a unique crown. 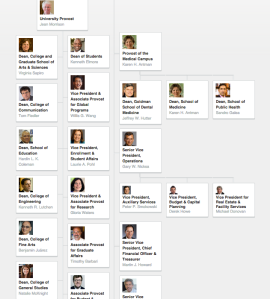 I interviewed with them again in January and at the beginning of March. This was for a position in their provost’s office, a director position managing undergraduate and graduate fellowship opportunities and advising students via those opportunities. The position was a bit beneath my experience, but they seemed interested, and I already knew from some initial research that it was a new position, so I went ahead and applied for it. My first interview was by telephone, with Suzanne Kennedy, the assistant provost for academic affairs at Boston University. It was a pleasant but underwhelming interview, and I actually didn’t expect a call back. So I kept up with my usual work of teaching, consulting, and looking for more consulting opportunities.

I received an email five weeks later asking me to come up to Boston for a second, in-person interview. I gave it the go-ahead, although the length of time between first interview and correspondence concerned me. So too, did my back and forth with Kennedy’s assistant over travel, as she had initially booked me at times that were very inconvenient for interviewing purposes. Not to mention, the major snow issues that Boston experienced in February.

The interview on March 4 was honestly one of the worst experiences I’ve ever had interviewing for any job. I’m including an interview in which I discovered the place was a sweatshop in Chinatown, during my summer of unemployment in New York in ’88. I had three meetings in all, one over lunch with Kennedy, and two with the two associate provosts at Boston University in academic affairs (one undergraduate, one graduate). Over lunch, the conversation was going well, until I asked the question about the level of diversity with applicant pools for Fulbrights, Trumans, Borens, and Rhodes’ scholarships and fellowships. I kid you not, Kennedy’s eyes literally glazed over as soon as I asked about diversity. Keep in mind, I had asked about socioeconomic diversity — I hadn’t touched racial or gender diversity yet. After lunch, I didn’t see Kennedy again for the rest of the interview process.

My second sign came from my third meeting. I met with Timothy Barbari, associate provost for graduate affairs. It was obvious that Barbari hadn’t even looked at my CV before I walked into his office. The first thing Barbari says to me, with him pushing his body into the back of his chair so far that his attempt to be at ease looked more like a rocket revving to take off — “so, you have a rather interesting CV.” I may not have earned all of my money as an academician, but I’ve been around academic-speak long enough to know that interesting can mean a lot of different things, mostly bad. In this context, interesting meant “not straightforward, not linear in progression, not typical in terms of whom we typically hire.”

I was already feeling a bit like a checkmark or token interviewee by the time I left Barbari’s office for Logan. But after USAirways canceled all their flights to DC that evening due to a snowstorm that wouldn’t drop a snowflake for another twelve hours, it got worse. I notified Kennedy through her assistant that I was stuck in Boston overnight from Logan, and left a message the next morning that the Amtrak to DC was my only option, as more flights had been canceled. No word, not even a “I’m sorry that you have to go through this” response. It wasn’t until mid-afternoon that Friday, nearly a day after I returned to DC, and after a third message about them needing to reimburse me, that I heard from Kennedy’s assistant.

At that point, I wouldn’t have taken the job even if they had offered it to me. As it was, I didn’t hear from Kennedy again until April 7, five weeks after a second interview, and despite a check-in to find out what happened with this director position. It’s this kind of calloused approach that leaves folks shaking their head.

Shaking Off The Dirt

I’ve made a few determinations based on these experiences. For one, if this is the way that treat job candidates who look like me, how well do they pay and treat their service staff, the most vulnerable people on their campus? Not well, at least from what I saw and have experienced. For two, the fact that for both interviews, their top concern seemed to be about competing with “schools across the Charles River” — i.e., Harvard, MIT, Tufts — was somewhere between disconcerting and ridiculous.

An elephant shaking off the dirt, circa 2012. (JD Rucker via Pinterest.com).

The fact that with tuition, books, and room and board it would run the average BU student $60,000 per year also told me what I needed to know. Boston University is a place that wants elite status and elite students, and in pursuit of this Pollyanna goal, wants to hire people they feel fit the bill. As long as those people look like everyone else running the university — mostly White, with a few people of color lightly sprinkled in leading positions at the institution. Because Boston University has what activist Linda Sarsour (Twitter, @lsarsour) calls cosmetic diversity, a genuine attempt at diversity across socioeconomic, racial and gender lines is unnecessary, at least for the powers whom run the institution.

Aside from Martin Luther King, Jr., who earned his doctorate in divinity at Boston University in the early 1950s, I’ve known or known of only one person of color with a degree from BU. She was a neighbor at 616 East Lincoln, a few years younger. Based on her description of more than two decades ago, I’d have to say that Boston University has changed for the worst. Like most universities, they seem more interested in prestige and raising money than in fulfilling their mission.

And with that being the case, why send your kid to Boston University? Especially when, for the same amount of money or less, every other school in the Boston area is either better, or at least, cares more about diversity and learning beyond the cosmetic.