I met Angelia, my wife of nearly fifteen years, on this date, Earth Night 1990, twenty-five years ago. I’ve known quite a few people longer, and have muses and crushes that seem to go back to the womb. But there’s no one that I learned more about and know better. To think that our one-time friend Bryan Freehling attempted to put his two tallest Black friends together, only for us to not date for five and a half years, and then get married a decade later? Life is a universe of journeys!

This post, though, isn’t about that first meeting between an at-peace but somewhat cocky college junior and a statuesque, hard-working yet weird woman who would’ve been “too much car” for most people in our circles. It’s about after we began to date, after we decided that this relationship of ours was a bit more than just gettin’ our grind on. It was serious by the time I walked down the steps of Thackeray Hall with my Carnegie Mellon PhD degree in my hands, ready to pummel both Joe Trotter and my Mom with the leather case that held it.

That fall, Angelia decided that it was beyond time for her to complete her degree. For as long as I’d known her, she had been a full-time worker and a part-time to no-time student. Angelia had worked at Campos Market Research (where I worked briefly for two weeks before quitting in May ’90), at Atlantic Books, at Blockbuster, really, at anything that could pay bills and help her and her family out while she lived at home in the no-longer-nice section of Homewood in Pittsburgh.

After taking another job with another market research firm in September ’97, Angelia finally went for it. She sent a letter to the University of Pittsburgh’s ombudsman, Ron Slater, to get reinstated at Pitt to finish her degree, as she still owed $3,000 in tuition and other fees from previous semesters, going back seven years. Slater and Pitt did give her the spring semester of ’98 to take some courses while paying down her bill.

“Some courses!” That’s LOL, considering what Angelia did next. She went ahead and registered for six courses that spring in order to finish her degree. Her courses were Monday night, Tuesday night, Wednesday night, Thursday night, Saturday morning, and an extension learning course (which meant she decided the pace of her work in that class), in communications, political science, and a general writing course she had to retake from nearly a decade earlier. Keep in mind,Angelia was also working a forty-hour-a-week job recruiting staff and clients for a market research firm while running this gauntlet. I thought she was crazy just for registering for so much. 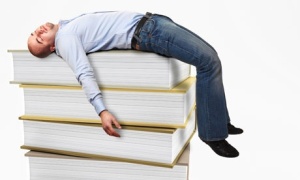 It turned into a four-month-long experiment in sleep deprivation, bottled Starbucks Frappuccinos, and box after box of Hot Pockets “sandwiches” (with “Lean Pockets, too!”). When I’d see her on Saturday evenings and Sundays, and on the occasional after-class weekday evening, Angelia was almost always ready to go to bed. She kept at it, though, reminding herself that this was her last semester at Pitt, that it was do-or-die.

When April ’98 rolled around, I could tell that Angelia was pretty worn out, especially now that she’d finally started doing the work for her extension course. So I offered to help. From Friday, April 10 through April 24, I essentially moved in with Angelia at her East Liberty flat on North Negley. Only “essentially,” because I did occasionally change clothes or check the mail back at my place, and I still had my own job at Carnegie Library in East Liberty to work. But for a bit more than two weeks, I served as Angelia’s advisor, tutor, professor, boyfriend, and taskmaster.

I tried to keep Angelia on a schedule that would give her about five or six hours a sleep every day, even if it meant a two-hour nap after class and only four hours of sleep at night. By finals week, this week seventeen years ago, even that wasn’t working for Angelia anymore.

That week, I became in charge of the food for the two of us for the first time. I didn’t just throw two Hot Pockets in the microwave for Angelia (I never ate the stuff myself — the broccoli and ham and cheese pocket looked disgusting enough). I started cooking sweet and sour chicken, hamburgers and other, more nutritious food for her to eat. I put her on a full schedule, telling her when to go to work, when to work on her communications papers, when to study for her poli sci exam, read over her papers to tell her what she needed to revise. Managing Angelia became a second job.

She had two papers to finish by the next to last day of finals week, a communications paper for her extensions course, and some dumb paper assignment for her General Writing class. The communications paper was nearly twenty pages. It was done, but it needed a conclusion. After I read it, around 3 am, I woke Angelia up. “You can’t end your paper as if you’re driving over a cliff – you need a conclusion,” I said. Angelia started to cry. ” I’m tired!,” she whined, stretching the word tired out like” tttttiiiiirrrrrr’dddd.” So I worked with her, poured another vanilla Frappuccino down her throat, and talked through her conclusion with her.

When she turned in her two papers that Thursday afternoon, April 23, ’98, I was so proud of Angelia. She was about to be done with her bachelor’s degree, a journey that had taken up thirteen years of her life. After two weeks of living together under emergency circumstances, I knew that I wanted more of that for us. Just not with the boring classes, lack of sleep and processed food. Angelia, to her credit, hasn’t had a Hot Pocket (or a Lean Pocket) since that day, having vomited up one a week after finishing her degree.