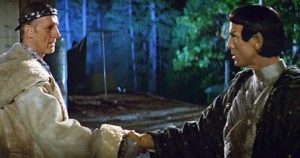 I met my wife Angelia (pronounced Angela, or, as she would say, “it’s ‘Angela’ with an ‘i'”) twenty years ago today. It was an early spring Saturday evening, one that’s typically crispy-cold in Pittsburgh. Our mutual friend Bryan was throwing himself an apartment-warming party. Bryan has recently moved into an apartment building in the Bloomfield/Friendship section of the ‘Burgh. I vaguely remember Bryan complaining that his one-bedroom apartment was $420/month, which, in Pittsburgh even now, could get you a one-bedroom apartment bigger than our first place in Silver Spring. Still, he was happy to have his own place, to not living at home or with roommates.

I was in a rare place of peace at the time of Bryan’s party. I had found my stride in my social life, with real friends, a solid group of acquaintances, and wonderful times. I was doing well academically without it being an obsession. And I was working, but only fifteen hours a week, leaving time to do so many other things like going to clubs and hanging out all hours. Bryan had become one of the folks in my circle that I could talk to about school, work, social issues, and music. Even though has was also the only person I knew who truly liked the late Barbara Sizemore, a professor in the Black Studies department at Pitt who had served as superintendent of DC Public Schools in the mid-1970s. To say that Sizemore was abrasive would be an insult to Brillo Pads mixed with pumice. But Bryan loved her, and though I had figured out that Bryan was gay, I assumed that he also wanted to marry her.

I was a bit surprised to have been invited to one of Bryan’s parties, which were sophisticated compared to the college-scene parties I’d been to before my junior year at Pitt. Now I’d see something like that and say that Bryan was trying too hard for an Iberian/Bohemian effect, minus the weed and the crystal meth. But back then, it would’ve been like being a working-class character on Kelsey Grammer’s show Frasier, all awe-struck by the expanse of space that I saw when I first walked in his place on April 22 two decades ago.

It was a place that I would’ve never, ever complained about back then, with a small foyer, a kitchen with more counter space than we have even now, and a bedroom larger than my one-room firetrap of an efficiency in South Oakland. Bryan had turned his living room into a meet-and-greet-and-dance space, with red-colored light bulbs and red candles lit. The beverage of choice was Bryan’s own margarita concoction, blended just right. Blended so well that I was on my third before I realized that there was a ton of alcohol in it.

That was when I met my future wife for the first time. It was the first time we had met, but not the first time I’d ever seen here. Six weeks before, on an eighty-plus degree March day just before Spring Break, me, my friend Kenny and a couple of others sat on the corner of Forbes and Bigelow. We were across the street from the Cathedral of Learning, outside of the William Pitt Union, rating the young women (and men) as they walked by. It was fun of course, and some of the women knew what we were doing, so we did catch hell at times. Then this tall woman with a middling skirt walked by, her head held up high, her cheeks as puffy as a bird’s, her hair and makeup done really well. Kenny said, “She looks thirteen!,” and we all burst out laughing as she walked by. She didn’t notice, oblivious to the humor we were having at her expense.

Angelia was Bryan’s boss at his part-time interviewer job with Campos Market Research. Bryan was such a connector/networker (as Malcolm Gladwell would describe him if he knew Bryan back then) that he could become friends with almost anyone in those days. Bryan had apparently invited the two of us to the party to meet, to set up two of his Black friends, as if height alone would bring us together. Angelia was already in an on-and-off again relationship with a third-string Pitt football player, one whom I’d met before. A man with a head bigger than Donovan McNabb’s, but whose athletic skills were average at best. Angelia had recently become a part-time student at Pitt while working full-time hours at Campos in downtown Pittsburgh. She probably wasn’t in the mood to meet a young man about sixteen months away from graduate school.

Bryan introduced us. She was just over six-feet tall, with her hair permed and teased. Angelia was wearing a pink-and-white checkered blouse, with the front-fringe tied into a knot. She wore a long, flared dark-denim skirt with sheet pantyhose and short heels. She was attractive. Until I started talking to her. Angelia’s voice, with that Pittsburgh accent, reminded me of listening to a duck as it bit another one in a pond in a fight over pieces of floating bread. She sounded weird, and she seemed bored. Then, when Angelia asked me about school, and I told her that “It’s going well. I have a chance to get a 4.0 this semester,” I might as well have said that “I’m doing much better than you.” At least according to her. Bryan apparently asked Angelia, “What do you think?” “He’s arrogant!,” she apparently blurted out in response. When Bryan asked me what I thought of Angelia, I said, “She’s weird!” Given what I was like back then, me calling someone weird was saying something.

Needless to say, we didn’t exactly hit it off. But I kept bumping into her in the weeks after the night at Bryan’s margarita-ville. During my two weeks working for Campos, thanks to Bryan. During the summer on Pitt’s campus. The following fall, where we inadvertently ended up seeing a movie together and going out to eat afterward. It would take nearly six years to get beyond “arrogant” and “weird” to significant others. And another four before our marriage. I guess this disproves the idea that you have only one chance to make a first impression.