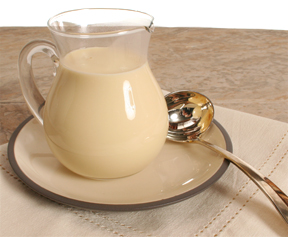 Creme Anglaise in a pitcher next to a ladle, the closest thing I could find to represent my foodie image of "creme de la creme," the mantra of Humanities administrators during my six years of travails, September 9, 2011. (Source/http://recipetips.com).

It’s been thirty years exactly since I made the most horrible set of first impressions in my forty-one years of life. My first day of seventh grade at A.B. Davis Middle School in Mount Vernon, New York was also my first day in the Humanities Program, a magnet program for the gifted track (and also the way the powers that were decided to desegregate the school district in ’76).

But it was so much more than that, for better and certainly for worse, at least for me. It was the flip side of a coin that represented the worst six years of my life (the coin’s other side being my life at 616 with what can only be loosely called my family). But it was also the six years of my life that made the past three decades of success, struggle, more success, and more struggles possible.

After putting together Boy @ The Window — in which a large measure of text was devoted to what occurred with and around me during my time in Humanities, one question still remains. Did my time in Humanities, with my classmates, teachers, counselors and principals have to be as difficult as they were — and not just for me? There’s no real way to answer that question, because “of course” is a cold and callous answer, while “of course not” belies the important psychological changes that made me a better thinker, student, writer and person as a result. But if I could, I’d build a time machine, jump into my eleven-year-old version of myself, and make sure to have my dumb ass take my kufi off for my first day of school in 7S. At least then, I would’ve been normal-weird, instead of standoff-ish weird.

My main problem, though, was that I arrogantly believed I was the smartest person in the world. I paid dearly for having that kind of naiveté, to the point where certain classmates still see me as that idiotic preteen, and refuse to see me any other kind of way. Too bad for them, for I know I’ve long since changed.

That day, at least for the past decade, has also reminded me of another beautifully warm, powder-blue sky day that turned tragic. With two days before we reach ten years since 9/11, I think about the way I used to be, and see so many similarities to how we see ourselves as a nation. “We’re #1,” we love to say, even though we’ve long since stopped being #1 in so many respects. We have the largest economy and military, the largest debt, make the largest contribution to climate change and pollution, and complain the most about how the rest of the world isn’t like us.

Like me three decades ago, America is naive and arrogant. And unfortunately, it faces competitors — some as unfeeling as my more entitled or more unscrupulous classmates — who are clobbering us in education, economic growth, health care, social welfare, even in protecting their citizens and their citizen’s freedoms. It’s sad, because there are millions of people now experiencing the severe fall into poverty — and all of the pressures that places on marriages, parenting and children — that I faced, very unsuccessfully at first, thirty years ago.

I’ve come full circle. Between the struggle to find a home for Boy @ The Window and my struggle to continue to do meaningful work as a writer and educator, I find that even on my worst days, my best days thirty years ago were a thousand times worse.  My first contact with academic competition, Whiteness and diversity, racial strife, religious differences and straight-up elitism is what has given me a greater appreciation for who I’ve become since that sunny day so many years ago. As well as how much I’ve gained.