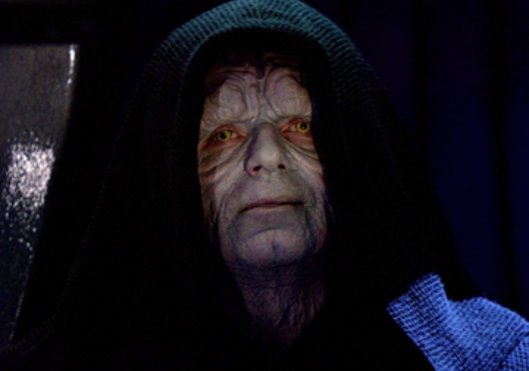 Darth Sidious, Star Wars VI (The Return of the Jedi) screen shot, 1983/1997. (LusoEditor via Wikipedia). Qualifies as fair use due to lower resolution and subject matter.

There are a plethora of people to pick from in making comparisons between President 45 and examples of narcissistic evil operating in positions of leadership. Andrew Jackson, Adolf Hitler, Benito Mussolini, 45’s hero Vladimir Putin, Jacob Zuma, and Recep Erdoğan all have served as examples in op-eds and other articles over the past couple of years. And these are all potentially good picks. Mercurial, vengeful, and even erratic actions, combined with dehumanizing speeches and screeds, all characterize this cabal of soft despots and fascist dictators, and match 45 well.

But the level of ostentatious stupidity that 45 has exhibited as President and a presidential candidate has made think of people closer to home. After all, 45 has always been a New Yorker, a crass rich White guy who has spent his entire adult life attempting to make himself look even more wealthy and powerful than his relative position in elite circles would’ve otherwise justified. He’s also always seen himself as the most important person in the room, maybe in the world. So much so that he has also seen himself as the smartest person in any context, even as everything 45 has touched has been tarnished or turned to shit by his callous, narcissistic stupidity.

In totality, this could describe any upper-crust New Yorker I encountered growing up looking to own more, buy more, be more than they already were. But in light of all things 45, I am thinking of two folks from my teenage years, the Levi brothers. They owned cleaners in Midtown Manhattan and ran a building-cleaning company, and my father worked for them all through the 1980s. The Levi brothers were two of a kind, some of the most flashy people with wealth that I would ever meet.

As I described them in Boy @ The Window

I can confirm with absolute certainty that the Levi brothers wore not-so-thin gold chains. I can also remember how uneasy my encounters with them made me feel. It wasn’t just the fact that they often questioned my intelligence. For nearly all of the years my father worked for the Levi brothers, they paid him under the table. They enabled his alcoholism, in exchange for $500 a week, for eighteen years. No retirement plan, no raises, no sick or annual leave, no unemployment insurance, in exchange for no child support payments and no tax payments. A Faustian deal if there ever was one. 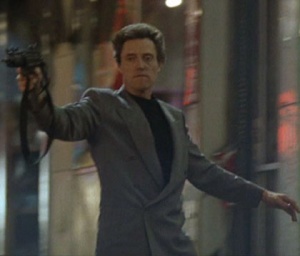 That my father knew who Paul Milstein was — the late real estate mogul for whom a program within the Columbia Business School is named — is amazing to consider in hindsight. It meant that he was privy to many conversations between the Levi brothers about their master plan for generational wealth. It meant that the Levi brothers believed themselves to be kings, or at least princes, of New York. But only because they cut corners in their shops and business, and looked for ways to literally get rid of their competition. Things that would later lead to alleged criminal activities and the loss of their businesses.

If I could interview them in their mid-1980s milieu now, I would’ve ask them, “Who were you trying to emulate, John Gotti?” But given those Lifestyles of the Rich and Famous times, I suspect the person the Levi brothers were most trying to ape was Donald Trump. Only, 45 came from more money, and wanted to do more than corner the market on cleaners and cleaning contracts for Manhattan high-rises. Beyond the differences in a couple of zeros, the braggadocio, the seeing of people not like them as “others” or “not human,” the need to show the world their wealth, their stunning stupidity in their attempts to monopolize their market. It’s as typical a New York story as I ever got the chance to see. And with 45, I get to see it again, this time on a massive scale, a crash-and-burn that the universe of intelligent beings won’t be able to ignore.