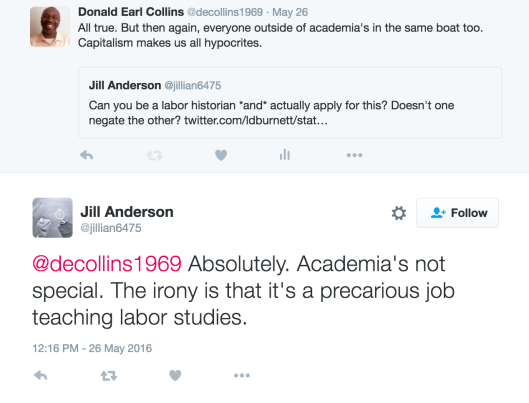 Irony/Ironic is a word that we in the West use a bit too often. It is ironic, for instance, that I left the job insecurity and financial instability of the nonprofit world after a decade, only to find myself part of the unstable world that is academia these days. But it isn’t ironic that nonprofit organizations working for a better world exist only because their leaders have the task of constantly raising money for their work. The best of these leaders make high-six-figure incomes and their nonprofits make billions, in organizations like Educational Testing Service, College Board, and my former organization, Academy for Educational Development. This isn’t an example of irony, at least not just. It’s maybe a contradiction, it’s maybe hypocrisy, it’s maybe even straight-up bullcrap.

A week and a half ago, a colleague became part of a Twitter conversation about a labor historian job at Rutgers University. (Full disclosure: I’d already seen the job a week earlier on Rutgers’ website, so no surprises for me). The job was for a non-tenure track position teaching a 4/3 load (four undergraduate courses one semester, three the other, with no summer courses, at least), the position potentially renewable after one year. The standard teaching load at most four-year institutions is between five and six courses (counting summers) per year. The ironic punch line was that it was the Labor Studies & Employment Relations Department that advertised this position, a department that ought to “know better.” 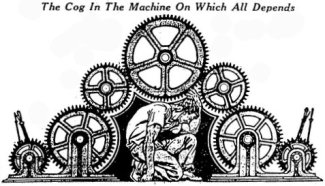 The Cog in the Machine, June 8, 2016. (http://catholicreadingproject.blogspot.com).

The problem for me is that this isn’t ironic at all. This department exists within the Rutgers School of Management and Labor Relations. These schools are not exactly incubators for “workers of the world unite” types, and would be most likely to take advantage of the weak job market to hire a labor historian desperately in need of a one-year or more gig. This is naked exploitation to be sure, but I find no irony in this job search at all. This is typical of the majority of jobs in higher education these days.

It is definitely hypocrisy, at least on the level of academia at large. Especially in considering that supposed bastions of liberal ideals (which universities really aren’t — they’re capitalist business enterprises which sometimes house some leftist leaning faculty) have turned the secure work of the professoriate into non-tenured service industry work. That this has coincided with the plunge in the number of full-time positions and in the number of living-wage positions in the US labor force in general is telling. It says that academia is nothing special beyond the expensive education, that it isn’t some sacred place for intellectual exchange and political mobilization. It is as firmly tied to capitalist pursuits as Wall Street and K Street.

I learned this lesson a quarter-century ago, thanks to the working-class history seminars at the University of Pittsburgh and Carnegie Mellon University. Between Dick Oestreicher, Bill Chase, Reid Andrews, Joe Trotter, and Joel Tarr (among others), the level of hypocrisy was enough to make me sick. The distance between what these people wrote regarding leftist movements, ideas, ideals, and exploited workers and how they treated students and colleagues sometimes was breathtaking. It was like the distance between the Terran system (Earth) and Alpha Centauri (roughly 25 trillion miles). 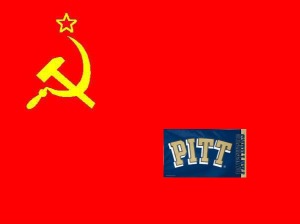 Sure, it’s all “let’s start a communist revolution” when discussing the 180th nuanced on E. P. Thompson’s The Making of the English Working-Class. But when graduate students wanted to unionize to have their work recognized as workers, then these leftists suddenly became capitalists. “No, you’re not workers,” they said. “You’re students.” In the face of virulent racism, they said, “Get use to it. Shit happens.” Heck, some of these so-called bleeding-heart-liberals were themselves harassing students, exploiting their work for prestige and profit, and playing favorites to promote yes-men and yes-women while keeping others from pursuing their doctorates.

I saw the same distance between noble liberal ideals and center-right realities in my decade in the nonprofit world, mostly working in social justice. Yes, some of the very people who had made it their calling to ameliorate racism and combat injustices were also knee-deep in their own contradictions. Gender-based, race-based, and intersectional harassment wasn’t exactly uncommon. Exploitative labor practices like working two people full-time for the price of one, denying promotions based on gender or racial bias, even paranoia over power within a social justice organization. They all were the usual things I witnessed or experienced in the years between 1997 and 2008. 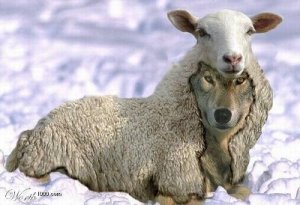 Wolf in sheep’s clothing, a false prophet (a symbol of my ex-stepfather), November 2008. (Source/flickr.com)

There is nothing sacred and no safe space for those of us looking for such things. This belief in academia as being so different from the rest of the working world is an illusion cooked up by neo-conservatives who’ve made millions selling the idea that academia is a liberal bastion. We should all look for positions and places in which our work can thrive and we as individuals or even groups of people can grow. Those obviously still exist. But believe me, it’s been years since I thought that academia was a place where being far left-of-center was a good thing. It’s only good if you’re good at acting like this is so. It’s another illusion that others have chosen to create to cover up their hypocrisies. The irony is that people still believe in these ideals anyway.