AED’s DC Office, circa 2008, before the sign came down. Source: http://www.glassdoor.com

It was ten years ago on this date that I began to think seriously about quitting New Voices and AED, the Academy for Educational Development, the subcontractor for USAID and the State Department in trouble these days (see my “USAID suspends District-based nonprofit AED from contracts amid investigation” post from December ’10). In the end, I probably should’ve on this date. I realized that most of the people I worked for and with cared more about money than Wall Street investment bankers, and had an addiction to fear greater than a junkie’s addiction to heroin. And, most sadly, I began to see signs of what my former immediate supervisor would admit two and a half years later, his bipolar disorder.

I’d seen signs of Ken’s mental illness as early as February ’01, but the first time I realized that I worked in an organization that thrived on fear was after me and my wife returned from our honeymoon in Seattle, at the end of May that year. All during the month of June, as I did site visits in Tulsa, Jackson, Mississippi, Fairbanks, Alaska and Durham, North Carolina, and visited my maternal grandparents in Arkansas, all fear was breaking loose in the New Voices offices at AED. Our funder, the Human Rights and International Cooperation unit at the Ford Foundation in New York, had called for a meeting to discuss the progress of the New Voices Fellowship Program to date.

I didn’t think all that much of it at the time, with me doing site visits almost every week and having done presentations for funders and academicians, including the Spencer Foundation, what was now the Gates Foundation, and a few corporate foundations over the previous five years. But as soon as I returned to the office that last Monday in June ’01, I realized that nearly everyone I worked with directly was on pins and needles about our Thursday afternoon meeting on East 43rd Street in Manhattan. Ken was on a higher level of worry than the rest of the staff, but it wasn’t a good worry. He had our program assistant and associate printing new copies of memos and other meeting materials every time he came up with a new sentence, found an error or realized he wanted orange paper for program statistics instead of lavender.

What made this even worse was that on Tuesday, Ken’s boss Sandra — whom I regularly called “Driving Miss Daisy” because of her bigoted semi-liberal ways — called an additional meeting to emphasize how crucial this meeting was to the future of New Voices. After ten minutes, Ken, the program assistant and associate all looked like Bush 43 and former Secretary of the Treasury Hank Paulson did on September 15, ’08, when the US financial markets melted down. When I politely pointed out that “we need to be ready, but not scared” in presenting our results to date to the folks at Ford, another meeting was called.

Except this Wednesday afternoon meeting was just between me and Driving Miss Daisy. She called me out on the carpet for “disrespecting” her. She told me, “if you don’t like it here, you can leave,” and that she’ll be at AED “longer than [me].” It made me feel as if I had to worry about my job for doing my job. Meanwhile, Ken was going over word for word what each of us would have to say the following afternoon in New York, as if one bad choice of words would cost us $2.25 million, money we’d already received from Ford.

After a rough night of sleep before an early Amtrak from DC to New York, I arrived at Penn Station refreshed and glad that I didn’t ride the same train with the rest of the Nervous Nellies. They were already at Houlihan’s, eating an early lunch, with Ken obviously more relaxed from whatever he had to drink by the time I arrived. 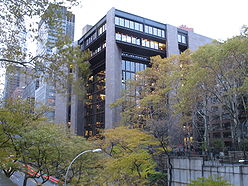 The meeting itself was where something kicked in for Ken, what appeared to be a natural high at first. After Sandra and Yvonne (Ken’s actual immediate supervisor, even though Ken never listened to her) did the introductions, Ken took over the two-hour meeting. He talked over me, the program assistant and associate, even the program officers in the spartan meeting room. Ken’s euphoric fear was so strong that he didn’t trust us to speak on behalf of New Voices, meaning that it was a waste of time and money for anyone other than Ken to be there.

Or was is? The imam-suit-wearing program officers from Anthony Romero (who was within a few months had moved on to become the Executive Director of the ACLU) to Alan Jenkins (now co-founder of The Opportunity Agenda), who had sat silently through Ken’s soliloquy, finally spoke in the final fifteen minutes of the meeting. Romero said, “Maybe it’s time for AED to consider looking for alternate sources of funding” for New Voices “over the next couple of years.” That was my take-away from the whole ordeal.

But it wasn’t for Ken. He was on one of his blue-crystal-meth-like highs again, giddy like a kid getting a ten-speed bike for Christmas. Yvonne looked ready to go, while Sandra the wise-one was just happy it was over. I wondered, out loud to the group, if the not-so-veiled hint provided by Romero meant that the unit and foundation’s priorities were changing. I, of course, was accused of worrying too much. Too bad none of the senior staff understood the definition of irony.