With America’s history of racial oppression, it should come as no surprise that the range of reactions to events like the police killings of Eric Garner and Michael Brown (among many others, male and female, Black and Latino) have been on the side of racial stereotypes and assumptions. On the one hand, police officers, ordinary Whites and some ultraconservative Blacks have used the terms “animals” and “thugs” interchangeably because Garner and Brown were big Black guys, the stereotypical boogeymen, lurking and ready to rape, maim and kill scared-shitless White folk.

On the other hand, the traditional civil rights establishment and its cadre of ministers have equated the lessons of Brown and the Ferguson protests with the need to stop “looting and pillaging” and to stop wearing baggy pants. That’s the fallback position for attempting to explain why the message of police brutality and militarization against communities of color because of racism and classism isn’t getting through to Whites who have mostly been silent on these incidents.

As I’ve written in the past year or two, both of these perspectives suggest that Blacks and Latinos must somehow make ourselves worthy of humanity. That way, even the most racist of Whites could see that we’re not animals or thugs, but human beings worthy of the same human rights and civil liberties that they enjoy. This didn’t work even during the height of the Civil Rights Movement some five decades ago. Medgar Evers, Martin Luther King, Jr., John L. Lewis, Michael Schwerner, Andrew Goodman, and James Chaney, and the Sixteenth Street Baptist Church in Birmingham, Alabama. Wearing suits and ties, marching with White allies, having the backing of the President of the United States. None of that swayed most Whites, as evidenced by changes in American politics since 1968.

The fact is, those Whites and sycophant Blacks who call African Americans and other people of color “animals” and “thugs” know we’re just as human as they are, if not more so. It’s their way of asserting that they’re better than us, precisely because they believe they can get away with seeing, calling and treating Blacks and other people of color as such. Especially since so many of these “animals” and “thugs” advocates have missed the full material benefits of American capitalism. And with America’s long history of allowing Whites to get away with lynchings, murders, rapes, race riots and other forms of violent oppression, why shouldn’t Whites think they’re in the right when they give money to Officer Darren Wilson for “doing his job” in murdering Michael Brown? As I’ve said before, the year doesn’t matter, the clothes don’t matter, our demeanor in public or how perfect our walk doesn’t matter to many — if not most — Whites. That may be our problem as people of color, but it’s definitely their problem as well.

Rev. Al Sharpton, sexual predator Jamal Bryant, megachurch-Gospel-of-Prosperity pastor T.D. Jakes and so many other men who spoke at Michael Brown’s funeral Monday put themselves on the other side of the “animals” and “thugs” coin with their agenda-loaded bloviations. Sharpton especially should know better, given his history of talking out of both sides of his mouth about the limits of the politics of respectability (Tawana Brawley comes to mind). Yes, being able to orchestrate nonviolent protests with proper victims in a way in which the mainstream media cannot dehumanize or engage in stereotypes was how the Civil Rights Movement gained momentum in the first place. But this methodology had its limits then, as it led to some victories that looked more like symbols than actual victories (even Dr. King said as much in his final three years). It definitely has its limitations now. 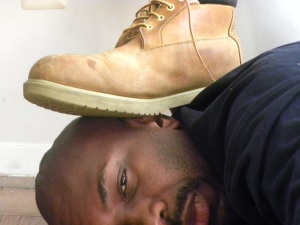 Foot on my neck and head, symbolic of oppression in terms of view of Black and Brown as “animals,” April 18, 2011. (Donald Earl Collins).

We have a leadership that has grown corpulent and ossified in its stomach, pockets and spirit when it comes to oppression and how to respond. Their thinking in so many ways isn’t much different than the Whites who post pictures of President Barack Obama eating a banana with his face pasted onto the head and body of a great ape. That’s the full shame of watching a funeral that was more about individual agendas than it was about Michael Brown or his family and friends, or his life and death, or mobilizing a larger effort.

It’s already terrible that we already have a nation of millions trying to hold people of color back, if only in their own minds (to quasi-quote Public Enemy). We can no longer afford to have an aging leadership whom, even when well-meaning, is unable or unwilling to move beyond symbols and pontification to an effort that promotes new tactics and strategies and younger leadership. It’s beyond time for younger generations to take the reins, and not in a respectable way, either. 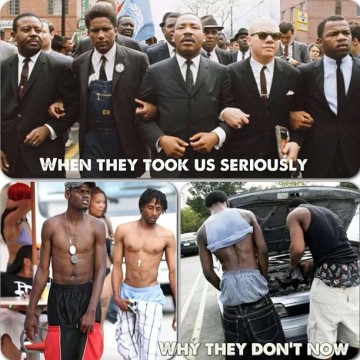 In the past month of March on Washington and “I Have A Dream” speech commemorations and Birmingham church bombing dedications, a series of images lamenting rap culture and “thug life” have made their way around the Internet. The one that has stuck with me the most has been the image of the Selma March in 1965 juxtaposed with seemingly random photos of young Black males with saggy pants. The caption reads, “When they took us seriously/Why they don’t now.” Really? White supremacists took respectable Negroes seriously in the ’60s because they marched and wore suits, but don’t take Black males seriously now because of the saggy pants phenomenon? The truth is, they did and didn’t take us seriously then and now, and it has almost nothing to do with pulling our pants up above our boxers.

I have to say, though, that I hate saggy pants. It makes the people wearing them look somewhere between goofballs and idiots. It’s never mattered to me whether White guys or Black guys or college guys or hip-hop divas have worn saggy pants. I didn’t like it when it became a style in the early ’90s, thanks in large measure to NWA and Tupac, TLC and Snoop Dog and a host of other hip-hop/rap artists. I certainly don’t like it now, and would never buy a pair for my ten-year-old son to wear that way. The saggy pants style has been a sad twist on hand-me-downs and poverty as marketable clothes for the hip-hop cool.

But the saggy pants style has never translated for me as embracing a  “thug life” or some devolution of Black culture or American society. It wasn’t life imitating art, ala Boyz n the Hood (1991), Menace II Society (1993) or Clockers (1997). Nor have I ever seen it as something that meant that Whites or the new Black elite could say, “See. These Black folk don’t deserve respect, or health care, or a quality education, or good-paying jobs.” Over the past two decades, I’ve seen it as a style — a bad style, to be sure — but a style that some Blacks (and Whites, Latinos and Asians) have embraced.

Any young Black person who’s striving for higher education, or careers, or their own stereotypical success story in life, will tell you that they don’t wear saggy pants for every time or season. Even those who don’t know learn very quickly that saggy pants aren’t welcome in allegedly more respectable settings. If anything, the prevalence of saggy pants in 2013 has as much to do with the reality that opportunities for education, employment and prosperity remain so out of reach that it really doesn’t matter to many what they wear and where they wear it. There’s no need to code switch if everyone in your world knows the same exact code of cool. 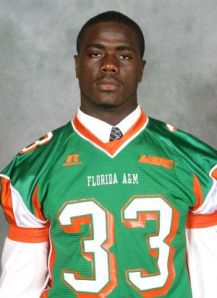 Recent events have made it pretty obvious that it really doesn’t matter what Black males wear. We remain targets for deeply ingrained stereotypes, institutional racism, and pre-emptive White violence. Whether it was Trayvon Martin wearing a hoodie in the rain, or John Lewis wearing a suit in Selma forty-eight years ago, it hasn’t mattered to Whites in fear of the Black boogie man. Florida A&M University graduate and former football player Jonathan Ferrell learned this deadly lesson in North Carolina just a week ago. It doesn’t matter what we wear, at least as far as many Whites and some Black elites are concerned.

Blacks all look the same to them, and looked the same to them in the ’60s. Suits, hoodies or baggy pants, we’re criminals and imbeciles from birth, thugs for life, and a drain on families and American society. This doesn’t mean that any one of us shouldn’t take responsibility for how we act, speak and look in public. I dare say, though, that structural economic issues like unemployment in deeply impoverished Black communities (or crank-infested White ones) won’t be solved with young folk pulling their pants up. We need to stop focusing on the insignificant, because saggy pants and respectability are the trees in this morphing forest of racism and economic inequality.