That was the title of a research paper I wrote for an independent study course I did with my former Pitt advisor Larry Glasco. It was a paper I wrote during my last semester at the University of Pittsburgh, undergrad and grad school. It was the last paper I would write for any professor at Pitt. But it was a paper that would address a bunch of common themes about me as a historian and scholar knowingly, and a writer unknowingly.

I began this paper without a course and on my own time in the Fall ’92 semester (see my post “December Doctoral Decisions” from last year). I had to fulfill a quantitative methods requirement in order to take my PhD comprehensive examinations at the end of my coursework, which at my pace would’ve meant taking them in the fall of ’93 at Pitt. Why they never included a qualitative methods requirement, I’ll never know. Of course, this digital humanities movement of quantifying the heretofore unquantifiable was but an embryo in the early ’90s.

With my language requirement taken care of the year before, I had no choice but to build on my existing statistical knowledge. Luckily, I’d inadvertently minored in mathematics and had been a computer science major before switching to history. I’d already decided on the topic of comparing infant/child mortality rates among White and Black Pittsburghers between 1900 and 1920, coinciding with the Great Migration period for Blacks. This meant census data from 1900, 1910 and 1920. This meant public health records from the same twenty-year stretch. It meant looking at neighborhoods like the Lower Hill District and Bloomfield, the occupations of the men and (in the case of Blacks) women living in these communities.

And it meant that I had to learn how to use SPSS, the most powerful number-crunching statistical software package on the planet. At least as far as I was concerned. It took me from September ’92 until the end of January ’93 to get comfortable enough with SPSS to plot and correlate different points of data. By then, I could generate reports and make sense of them. I knew that race, poverty/neighborhood and occupation (in that order) correlated best to the 2.5 to 1 ratio between infant/child mortality (death between child birth and the age of five) rates for Black families versus White families.

I used Lotus 1-2-3 to construct the tables, charts and graphs for my statistical correlations and data. Why Lotus 1-2-3? Their charts and graphs looked like “arts and crafts,” to steal a phrase from David Letterman. SPSS’s visuals were boring. Between the numbers crunching, the translation of correlation data into Lotus, and the actual writing of this paper, I completed my work for this independent study and quantitative methods requirement at the end of February ’93.

By then, I had two issues. One, I didn’t know what to title my paper. Most of my titles were inspired by cultural references from music, sports, TV shows, catch commercial jingles. I’d titled one paper “‘Sittin’ On The Dock of The Bay’,” an homage to Otis Redding and in reference to the topic of Black migrants finding permanent economic degradation after leaving the Jim Crow South for places like New York, Chicago and L.A. Another one, which I’d presented at several conferences, was “‘The Evidence of Things Not Seen’,” a prelude to my “‘A Substance of Things Hoped For'” dissertation (thanks to Hebrews 11:1 and James Baldwin). 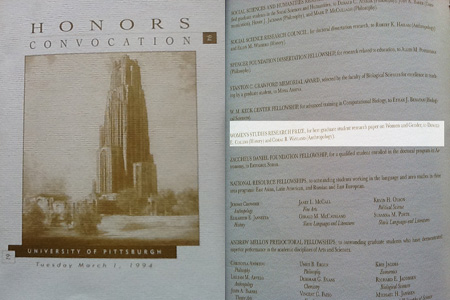 I solved this title problem while simultaneously dealing with the second issue, which was that I knew I was about to transfer to Carnegie Mellon to complete the doctorate. Joe Trotter had invited me to attend the job talks of a young professor who had recently earned tenure at the University of Chicago, I believe. I remember her being fairly attractive and found her work interesting, if not fascinating. While we walked up and down the factory floor, um, second-floor corridors of Baker Hall, I walked by a flyer for an upcoming talk on “The Dying of Young Women’s Children.” I decided that this would be the scaffolding for my paper’s title, right then and there. Only, I’d change “Young” to “Black” and give a footnote of credit to the flyer title.

I submitted my paper to Larry for my independent study, which I was now taking purely as pass/fail (or satisfactory/unsatisfactory), and not for a specific grade. After Larry learned of my departure, he never gave me feedback on the paper. As the end of the semester approached — and I became short on cash — I submitted the paper to the Women’s Studies Program’s Student Research (undergraduate and graduate) contest.

Two months later, in June ’93, I learned that I’d finished second in the graduate student category, and earned a check for $75, a week’s worth of groceries! My friend Matt, upon learning of my good fortune, said, “You won that prize because of that title,” adding that I “stole it” from a flyer.

Matt was right, of course. But I also learned something important through “The Dying of Black Women’s Children.” That all writers borrow from others’ words and ideas, and then make them their own.