Two months ago, I met portions of my extended Collins family in Maryland for the first time. I had no idea that my father had a younger brother, nor that his name was Felton, until I had received a call in August 2013 from my uncle about spotting him and his older daughter Falon a place to stay while she found a place to live here in suburban Maryland. My first cousin moved to the area to begin work on her MSW at Howard University’s School of Social Work. We couldn’t accommodate such a last-minute request, unless my uncle and first cousin had been willing to sleep on the floor.

When Falon graduated in May, I finally had the chance to meet this younger part of the Collins family, as well as an aunt I hadn’t seen since I was five (more on this next month). Among the things that came out of these meetings and our dinner together was that my Uncle Felton was not only a military veteran, but a Vietnam veteran with the 199th Light Infantry Brigade (“The Redcatchers”) between 1967 and 1969, no less. I knew that somehow the federal government managed to overlook my uncles on my mother’s side and not draft them for the Vietnam war effort (a “miracle” of rural Arkansas segregation, I assumed). So this was a lot of new information to take in. 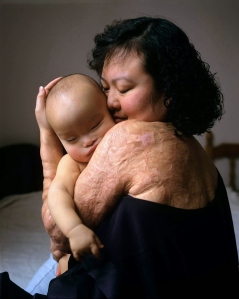 Kim Phúc with her then infant son, Ontario, Canada, 1995. (Joe McNally/Time & Life Pics). Qualifies as fair use under US copyright laws — photo illustrative of subject/ for educational purposes only.

But then again, it shouldn’t have been new information at all. Except for the fact that my father had spent the first thirty years of my life too inebriated or caught up in New York City life to remember to hand down basic family history to me and my older brother Darren.

I was really almost too young to remember Vietnam, but with my ability to observe and remember going back to Nixon’s resignation and the OPEC oil crises, I had noticed a few things. Like some of the news clips of the end of the war in ’75, of refugees on aircraft carriers, pictures of B-52s destroying village after village and city after city. Not to mention, the iconic, Pulitzer Prize-winning 1972 photo “The Terror of War” by Nick Ut (also known as “Napalm Girl”), depicting a then nine-year-old, severely burned Kim Phúc, which I asked my Mom about a couple of years later. She didn’t give me an answer.

That’s what I knew in my little seven-year-old mind about Vietnam prior to moving to 616 in ’77. In the corner of our tripartite apartment building, living in a basement apartment of the “B” building, was a man who looked like Lamont Sanford to me. Except he wore a beat-up green Army jacket and green hat on his head most of the time. I often saw him come and go, where I didn’t know. I also saw parents who warned their kids to stay away from him, some young Turks who occasionally stopped the man to make fun of him, and kids who sometimes teased him for having served in Vietnam, parroting their parents, I guess.

The Vietnam veteran couldn’t have been more than thirty, but he moved like he was at least a decade older. It was as if he was afraid to move, to be outside, to be around life, the way he moved, or rather, lurked in his comings and goings. I mostly felt sad for him, because it seemed like no one wanted to bother themselves with his existence.

I witnessed his infrequent sojourns from his 616 apartment and back until sometime in late ’79, or early ’80, when I realized he had moved out. Given that I was hardly outside lurking myself those years, between being on lockdown for running away and Darren’s Clear View summer camps, it was amazing that I noticed his absence at all.

At the same time, during our (me and my older brother Darren’s) outings with my father between ’79 and ’81, I noticed that in his occasional stops at “Wino Park” (a mini-park on the corner of South Fulton and East Third in Mount Vernon), there were quite a few veterans in their late twenties or early thirties there. A typical Friday evening or Saturday afternoon outing could be spent watching Jimme and his drunk friends eat food they bought from the pit bbq joint across the street from the park while drinking beer, malt liquor, hard liquor, and cheap wine from paper bags. All while they took turns peeing on the rock face that jutted out on the side of the park, or around one of a handful of barren trees nearby.

The Vietnam veterans were the quietest people in the group. They were the ones who could laugh, but often didn’t, and rarely smiled. Sometimes, having to spend as long as an hour watching my father hang with these men, I found myself wondering about the man in his post-war uniform who used to live at 616. What happened to him? Did he take drugs? Was he really crazy? Did he drink in a semi-sullen silence and watch older drunks like my father make fools of themselves?

When there’s only either Wino Park or 240 East Third with Ida and Callie Mae to look forward to, wondering what happened to a silent veteran seemed like a much more useful activity. Of course, now we celebrate every veteran as a hero. Yet we don’t do nearly enough for veterans — for any Americans, really, much less the damage we do to the rest of the world in the name of America — who suffer from the wounds of war and life. We prefer to glorify or shun them all without thought, like the little narcissists we all are.