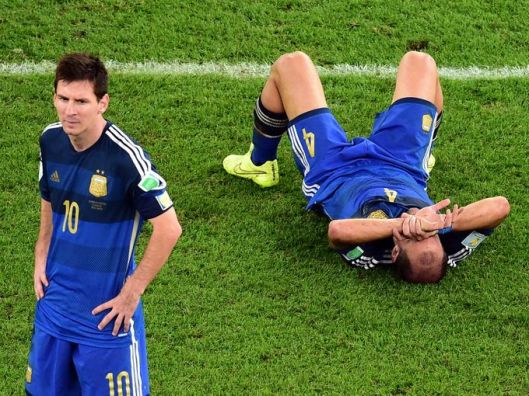 Argentina’s Pablo Zabaleta lies on the pitch as Lionel Messi stands beside him after losing to Germany in the final, Rio de Janeiro, Brazil, July 13, 2014. (Francois Xavier Marit/AP via http://usatoday.com).

Maybe not to that extreme, but there are circumstances where teaching a college course can be a joy or torture or even sometimes both at the same time. Some of this has to do with the actual nature of the course, some of it with my disposition, some of this with the types of students that walk through the door. But, in teaching somewhere around sixty courses since ’91, working with a civic education nonprofit and consulting with another one, I’ve found two large categories of students who have made teaching more enjoyable over the years, though not always an actual joy. One group has been graduate students, the other high school students aspiring for college.

There are a number of reasons why, of course. Some are pretty easy to understand. High school students aspiring to go to college or taking college-level courses are often ambitious and motivated, students who are amenable to learning. Graduate students often aspire to be better at their specific profession of study, which in my experience, has this group of students essentially aspiring to be some version of me. Even the brown-nosers in both groups tend to have the motivation necessary to be better students, or at least, to look like they’re better students.

It also has helped over the years that the several hundred high school and graduate students who’ve been in my classrooms have actually wanted to be there. Doing a week in Washington to learn how Capitol Hill really works, or a summer course at Princeton on AP US History or taking one of my undergraduate course over the years at the University of Pittsburgh, UDC and UMUC, those students (and their parents) made the choice to take those steps. Those students wanted to get into a college of their choice, to be well prepared, to make themselves better students, and perhaps even, better people.

History graduate students have choices, for the most part, in terms of which graduate seminars they take and in their specific cultural, geographic area and time period focus. In my experience teaching school of education courses, though, at Duquesne and George Washington University (courses like History of American Education, Multicultural Education or History of American Education Reform), the students I’ve taught in those courses chose to be there. They chose to read as many as eight books in eight weeks, to write term papers and research papers and do original research. Those students wanted to become better as teachers, as researchers, and in a few cases, to become college professors themselves. 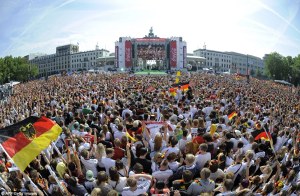 So what’s different teaching undergraduate courses with undergraduate students? Well, they’ve tended to complain the most about general education requirements, ones that require them to take a course in US or World History (my African American History students are generally happier about taking the course). But that’s not all. A fair number have treated me as their enemy, not as their professor or a teacher invested in their learning. Of course these students were in school to complete a degree. But college was no longer an aspiration. It was now a reality, with all of the responsibilities and complications that come with the five-year march toward a four-year degree. For traditional college-aged students, there have always been competing interests, the need to organize a life that involves working 15-20 hours per week and some semblance of a social life, and attempting to figure out a major (often not history).

With my adult learners, those pressures come from at least three directions. The personal pressure to perform academically, the workplace, familial and parental pressures, and the pressure of learning how to be a college student on the fly. Add to this mix the general lack of academic preparation for college for those over twenty-five. All of this has frequently led to a combination of insufficient motivation to learn — even when I’ve explained the “what’s-in-it-for-them” piece — and a quiet hostility toward the process of college matriculation. For this group as a whole — traditional college students and adult learners — aspirations can frequently turn into Being and Nothingness, or rather, a state of being and meaninglessness.

This mindset has been the most difficult aspect of my job as a teaching professor over the years. It’s somewhere between extremely hard and absolutely impossible to teach students whose minds have been closed to learning or self-improvement, whose idea of an education is a piece of paper and a rubber stamp. That most of those students who’ve made my work most difficult are undergraduates isn’t surprising, though. That’s part of the job.

Still, there are times where I miss those days when I taught or worked with high school students fully motivated to get into college, who already had a sense of where they wanted their lives to go. There are times when I miss a grad student angling for a higher grade or with a real interest in my writing and research. For better and sometimes for worse, at least they’re interested in the learning enterprise.