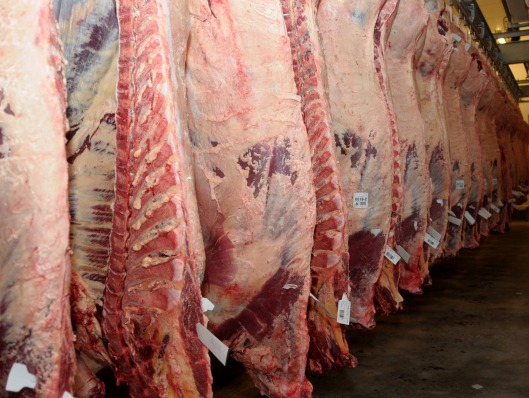 A slightly left-of-center friend of mine from my grad school days at the University of Pittsburgh and Carnegie Mellon has gone off the rails in the past couple of years. At least once a week, he posts on Facebook and The Washington Post his views of the “nice guy…to have at a barbecue,” the “dangerous man” he consistently describes President Barack Obama to be.

Every parsed word, every decision, every breath President Obama takes my friend construes as evidence of the president’s link to the Antichrist and the Apocalypse. My friend has become an unlikely crackpot, willing to see everything President Obama does in the most negative light. To the point where he doesn’t give the president credit for decisions in which few could find fault.

But there’s one thing in which my friend from the ’90s is certain and correct. That if we the people only hold the conservative, reactionary and fascist oligarchs — the GOP and their neocon supporters — accountable, the centrist, not-so-progressive and Wall-Street-beholden oligarchs — the Democratic Party — will be able to get away with demolishing what remains of a sense of progression and fairness in American culture and politics. The two-party system has been broken for a while, rusted out from citizen apathy, a military-industrial complex, and the corruption of money, power and religious absolutism mixed with our nation’s other -isms.

It does beg the question, how do our politicians see us? I already discussed this in my post from last August, “When Politicians Say, ‘The American People…'” But I think moving pictures and good old-fashioned pixels might tell us more about the likes of Mitt Romney and the Koch brothers think of us on a collective scale, courtesy of The Matrix and the meatpacking industry.

Ultimately, we are packets of employment and consumerism, meant to be exploited to the fullest extent that capitalism and our politicians will allow. And if we don’t hold those who may well have our best interests at heart accountable, like President Obama, they too could easily fall prey to those who only see us as carcasses, cash cows or batteries to power their oligarchic lives. Even if my grad school days’ friend is a crackpot. 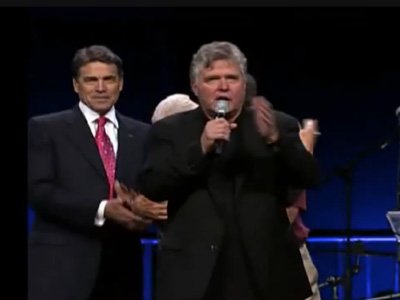 I used to be one of them. One of those evangelized Christians. Coming off of three years as a Hebrew-Israelite, I became a Christian in the spring of ’84, without a church, and without an immediate family member who had any real experience as part of a Christian family or community.

So naturally, when my mother — who still appeared to be a practicing Hebrew-Israelite — would tune our one working stereo radio to the Christian AM stations in the New York City area in the summer that followed my secret conversion, I’d listen. I’d hear everything from Amy Grant’s “Angels Watching Over Me” to folks like Jimmy Swaggert and Kenneth Copeland on those two stations. Plus, there was the 700 Club, Oral Roberts and Frederick K.C. Price on our TV at 10 am Monday-Friday, and Sunday mornings between 8 and 11 am.

With the exception of Price, a good portion of what these televangelists and radio preachers would talk about was the Book of Revelation of St. John. They’d outline in detail everything from the Four Horsemen of the Apocalypse to the gigantic sucking sounds of great death as the Lord opened one seal after another. As a fourteen-year-old and brand-new Christian, it was scary listening to them. So scary that it seemed unlikely that I’d make it to thirty before the entire world was on fire. 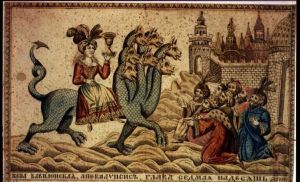 The Whore of Babylon, from a 1800s Russian engraving. (Source/Wikipedia). In public domain.

When Swaggert or Roberts or Robertson would get to the part of Revelations that talked about “the whore of Babylon,” they’d lament about how America was the “whore” that John of Patmos had described in his letters to the Christian churches in what is now Turkey — 2,000 years ago. But for Swaggert, Roberts, Robertson, et al., it was because of gay rights, or because of Blacks having kids out-of-wedlock while collecting welfare, or because women were on an assembly line to have abortions, or because of out-of-control government spending that America had become the ultimate harlot.

I put much of what they said aside even then, because my life at 616 and in Mount Vernon was scary enough without thinking about the fate of four or five billion humans. But all of this came up again, especially once my mother revealed herself as an evangelical Christian in ’89, in the last days of her marriage to my idiot (ex-) stepfather. In the years that followed, whenever I visited over the holidays or came home to work for the summer, I’d see more of Kenneth Copeland, Oral and Richard Roberts, Pat Robertson than I’d see of regular television.

In particular, a “new” guy, Jack Van Impe, along with his wife, was on. Every week in the summer of ’90, my 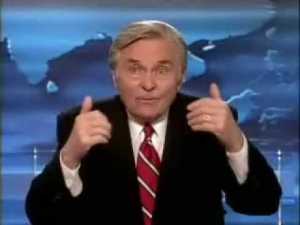 Jack Van Impe, circa 2010, predicting an Apocalypse via Iran. (Source/http://wn.com).

mother would make me sit in front of the TV to hear this guy relate things like the Iraqi invasion of Kuwait in August of that year to the Rapture and the Apocalypse. Somehow, the evil spiritual forces intent on world domination and human corruption were unleashed by Iraq and the US response to Iraq that summer. Van Impe was so worried about the rebuilding of the Roman Empire via the expanding European Union that he looked like he was about to collapse from a brain aneurysm.

My mother once said, “You think they crazy, but when the Rapture comes and you’re stuck here, you won’t.” I didn’t think that they were crazy — I knew they were. But more importantly, what I was really thinking was, why is she watching this, and making me watch this stuff, too? It’s not as if anyone, whether an atheist or a Zen Buddhist, didn’t or doesn’t really know that our world faces a multitude of challenges that could lead to a perfect storm of global crises, causing immense destruction and death. That’s true. Still, I couldn’t see how any of us could make sense of what we face as a planet by using the Book of Revelation as a guide.

So, when Rachel Maddow decided to go after Governor Rick Perry and “The Response” party down in Houston earlier this month on her show, I, unlike most Americans uninvolved in mind-bending forms of Christianity, wasn’t surprised. I didn’t feel shock that there was such a thing as the New Apostolic Reformation, because there isn’t anything new about it. I wasn’t even surprised that the likes of John Hagee would consider Oprah Winfrey the “Whore of Babylon” because of her ability to use verbal voodoo on the millions of people who worship everything she does. And I was unsurprised, unfortunately, that a snake-oil salesman like Perry would fall into their camp. 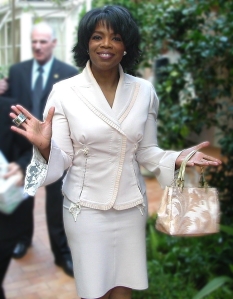 Quite frankly, there are only two things that surprise me. One is that there are millions of people like me who could find more holes in the evangelical apocalyptic paradigm in one nanosecond than Maddow could in one day, yet we’re never called on to refute and inform. The other is that it’s taken this long for mainstream media to really pick up on what has been a four-decade long trend in the meshing of the wackiest of “Christian” ideas with politics that exploit America’s imperial fears. That our days as #1 are at an end. 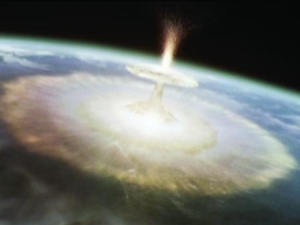 Super Comet: After the Impact

American — and to a lesser extent, European — narcissism knows no bounds. It can’t be more clearly demonstrated than in all of the scientific demonstrations of how our world could come to an end. The BBC, The Science Channel and Discovery have all been very busy the past six years or so, working out scenarios in which most of humanity and life on Earth faces complete annihilation. Documentaries and shows like The Nostradamus Effect, Earth 2100 and Super Comet: After the Impact are all examples of

our obsession with the fall of our glorious civilization. But in our obsessing over our self-deluded visions of self-destruction, we’ve also made inglorious assumptions that say more about us now than any impending doom ever would.

In Super Comet, the producers and writers are especially guilty of narcissism. A comet with the destructive power of the asteroid that burrowed its way into the Yucatan peninsula 65 million years ago and provided the final death knell of the dinosaurs slams into Earth in the twenty-first century, when all attempts at stopping it have failed. A Latino man working in Texas, scientists at the Hawaiian volcano observatory near Kilauea, a Parisian family and a tribe of Pygmies in Cameroon.

After it’s all said and done — between the fiery impact, the worldwide EMP shockwave, the burning rain, the 800-degree day and the mini-Ice Age — the world limps on, with post-industrial Europeans and hunter-gatherer Cameroonian Pygmies managing to survive. Not to mention a White male scientist hooking up with an Asian female scientist on Hawaii in the process. The dumb Latino guy kept searching for his family until he reaches the impact crater in Southern Mexico, still a smouldering mess four months after impact, while the Black guy who helps get the Hawaiian couple on board a sailboat dies in a massive Pacific storm.

Earth, but in whose hands?

The subliminal message in all of this is that the world can’t continue and rebound without folks from America and Europe, with the bulk of those being, well, White folks. Though not overtly racial in bias, it’s certainly narcissistic. As if 900 million people in Sub-Saharan Africa could be reduced to Pygmies, not to mention South Asia, East Asia, South America and other parts of the world that could contribute to the rebuilding of world civilization after such a catastrophe.

But these kind of scenarios aren’t limited to Super Comet or Earth 2100. Every post-apocalyptic vision of the world after nuclear war shows civilization kaput, gone, the world without any future at all. I didn’t know that hundreds of missiles were aimed at Accra, Lagos, and Dar es Salaam, Sao Paolo, Montevideo and Rangoon. It’s as if because the rest of the developing world is in such dire straits that the producers of these docudramas have already written the Global South — not to mention ordinary indigenous people and folks of color in America and Europe — off.

It seems to me that until we get over ourselves in the US and Europe that we are doomed. Not as a world. But certainly as the world that we think is ours stops revolving around our riches and power.