It was during the Balkis Makeda phase at 616 thirty years ago where I realized not only that we were in serious poverty, but that we as a family, as part of 616 and part of Mount Vernon, New York lived with a poverty of ideas. Not just ideas about changing the world or other grand concerns. I’m talking about simple stuff, about how to get from Point A to Point B, about how to fix things, about the idea that help can always be found when things go wrong.

It started and ended with our one toilet the third weekend in September ’84. That Friday evening, during my standard early weekend search for my father Jimme and at least $50 after school, my three-year-old brother Yiscoc managed to drop a toy into the toilet and then attempted to flush it and his waste down it at the same time. The result by the time I returned home was a stopped up toilet.

With the Hebrew-Israelite matriarch living with us, eight out of the nine humans in the apartment would need to use the one toilet at some point. Early Saturday morning, Makeda left, presumably for temple, but didn’t return to resume her occupation of my Mom and Maurice’s master bedroom until Tuesday afternoon. So much for the power of prayer!

I must’ve gone down to the bowels of 616 to search out our alcoholic Latino super a half-dozen times between Saturday morning and Sunday evening, in between all of my other more typical weekend chores. Not only wasn’t he around the entire weekend. The stench back in the apartment got worse as the weekend progressed, as my Mom, Maurice, and my younger siblings Maurice and Yiscoc continued to try to use a toilet that went from fifty-percent clogged to eighty-percent backed up.

My Mom even tried to have me plunger out this nearly overflowing cesspool Saturday evening, after another walk over to Jimme’s place for money and relief. “What, you never touch shit in a toilet before?” my Mom asked after seeing my face turn toward absolute disgust. I managed to get the sewage water down temporarily, found a way to scoop out a turd without gloves and without throwing up, and pledged to not go in the bathroom again until after the super came to fix the problem. Maurice, my idiot stepfather, left 616 that evening, most likely to carouse and for a working toilet, also not to return until Tuesday afternoon.

There weren’t any good options for toilet use beyond home. That was the Mount Vernon and New York area in which I grew up. Pelham Library and Mount Vernon Public Library were the only decent options where the public restrooms worked and the homeless and careless hadn’t ruined the toilets. Everything else required me buying food or was closed. I used Mount Vernon Public Library before it closed Saturday afternoon, back when stayed open until 5 pm on Saturdays, at least (I think it only stays open until 1 pm on Saturdays now).

I split that Sunday between washing clothes with the little bit of money we had left from my Jimme-run the previous weekend and then searching for Jimme that afternoon. I couldn’t be at 616 for another round of virtual typhoid and dysentery while splashing around in deadly toilet water and using a cleaning bucket as a chamber pot.

We reached Jimme’s, my older brother Darren and me, by 2 pm that Sunday afternoon. He was home, hung over from another weekend of gettin’ to’ up, moaning as usual about how he “cain’ do dis no mo’. Nex’ week. Gotta stop drinkin’ nex’ week.” I didn’t care what my father had left of his money that Sunday. We stayed there until after 7 pm, watched the Jets beat up on the then sucky post-Ken Anderson Cincinnati Bengals, ate a few snacks and some golden delicious apples and pears, and used the functioning attic toilet to our bowels’ content. 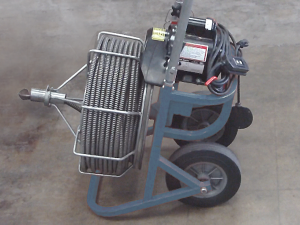 I did manage to get $30 out of Jimme, with promises of more by that Tuesday. It came with the caveat that we’d start earning our money by working for him down in the City again. But that wasn’t a big concern.

Me and Darren went to MVHS and Clear View School school that Monday morning with a still stopped up toilet and no sign of the super. So, before I came back to the apartment after school, I tracked down the man, yelled at him for not being available all weekend, and then asked politely for him to bring up his snake machine. Which he immediately did.

It took between forty-five minutes and an hour for him to clear the pipe and pull out the toy truck that Yiscoc had somehow managed to get down in the toilet on Friday. The super laughed through his mask, said something about kids in his combination of broken English and Dominican Spanish, and left us with a working toilet once again. I still didn’t sit on it to take a dump for nearly a week after the whole ordeal, though.