I’ve been enthralled with books since my brother Darren helped me decipher the code of the English language during Christmas ’74. Going to the library for most of my life — especially my growing up years — was always a break from the Grade II bone bruise that my life often seemed to be. I remember the first time my Mom took us to Mount Vernon Public Library, in August ’74. It was only a few blocks from our old place, 48 Adams Street, and about seven blocks from 425 South Sixth. I was too young to get a library card, though, and I started complaining. “May-wa! May-wa!” — that’s what I used to call my Mom (a combination of her name Mary and Mama) — “Why can’t I get a card?,” I cried on my way out the door. 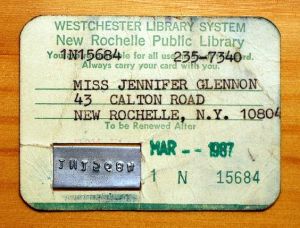 I got my first library card in first grade. It was a class trip, as me and the rest of Ms. Griffin’s class walked to and from Nathan Hale ES to Mount Vernon Public Library. The librarians gave us a tour, during which a thunderstorm erupted. It was sometime in September ’75, a Friday I think. But feeling that small, round-edged MVPL card in my hand with that stamped metal plate on it made my otherwise rainy day. That it had my name typed on it helped as well.

I spend many hours at Mount Vernon Public Library over the years. I needed to. I had so much to learn, more than the 28-volume World Book Encyclopedia set from 1978 could teach me. And certainly more than what my parents and idiot ex-stepfather Maurice knew, much less what they decided not to share. MVPL got me through my spiritual crisis of 1983-84, because I had access to the Qur’an, Torah, and other spiritual texts from which I could make a decision and move on from the cultish Hebrew-Israelites in my family and life. I wouldn’t have considered majoring in history if I hadn’t been able to check out dozens of dusty World War II books between 1980 and 1982. My love for all things Charles Schulz and Peanuts couldn’t have developed without the help of MVPL’s weekly Bookmobile visits at Nathan Hale on Tuesdays or William H. Holmes ES on Wednesdays, usually between 1:30 and 2 pm.

But by the summer of ’80, I began to realize that not all libraries were like the enormity of Mount Vernon’s. Nearby Pelham Library was on the ground floor of Hutchinson Elementary School. It was the size of a small bookstore, with maybe two tables and six chairs to sit in (they didn’t move into their own building until 1995). New Rochelle’s library was 1970s-style modern, with ugly shapes and colors. But both had more air conditioning and bathrooms that didn’t smell or weren’t under repair half the time.

From high school on, I used libraries mostly as a form of escape from my then-idiot stepfather and a gaggle of younger siblings. Or to escape the desperate poverty and chaos that enveloped my life at 616, and to a lesser extent, parts of Mount Vernon and other parts of the New York area. I first got the courage to go into the vastness that was the New York Public Library’s main branch on 42nd and Fifth in the fall of ’84. I infrequently went to White Plains’ public library. At least once between 1984 and 1988, I went to nearly all of the libraries between Wakefield in the Bronx and the various tiny libraries in southern Westchester County. But no library outside of NYPL’s main branch had both the collection and as easy access to the stacks as the one in Mount Vernon. 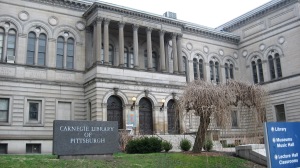 I had more appreciation for one of the few pleasures offered by my original hometown during my twelve years in Pittsburgh. Within 230 yards of each other were the University of Pittsburgh’s Hillman Library and Carnegie Library of Pittsburgh’s main Oakland branch. If it weren’t for their extensive collections and my alumni status after the spring of ’91, I couldn’t have attended graduate school. Pitt’s policies toward alumni alone saved me $3,000 in book and printing costs, as well as from an additional year of dissertation research. And as many times I could pick up a book, any book, go to the African American Literature section of Hillman, put two lounge chairs together, read, fall asleep, and read some more? The only other thing I could’ve asked for was a blanket and room service!

Since moving to suburban Maryland and DC in ’99, I have been struck by the lack of in libraries around here. Lack of books, lack of extensive interlibrary networks, and a lack of substances over style. The Montgomery County library system had two new ones built in Silver Spring and in Rockville. Each has enough space for a half million volumes, it seems as if their designers built them on the assumption that everyone uses a tablet or an iPhone to read books these days. If it’s nonfiction and a bestseller, they likely don’t have it. Though DC Public Library’s main branch in Gallery Place — the Martin Luther King, Jr. Library — has an extensive collection of DC artifacts and histories, and African American nonfiction and scholarly volumes, patrons cannot borrow these volumes at all. Like the Library of Congress, the MLK library is mostly a museum with books. And by the way, the main branch is now closed for the next three years for modernization, leaving the homeless, researchers, and book lovers like me with even fewer DC area options. 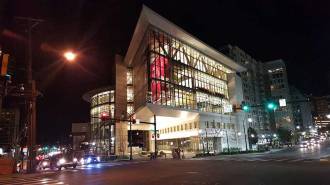 Georgetown and Johns Hopkins both have wonderful main libraries with friendly security guards and extra-helpful librarians. But they’re not Hillman. Even as a professor, if I fell asleep in a lounge chair, I’d likely get kicked out. Plus, in our era of smartphones and tablets, most patrons are stuck in social media in between hectic moments for exam cramming and last-minute paper writing. This, though, is still way better than George Washington’s main library, or NYU’s and Columbia’s, for that matter. You can’t walk into either without a form from a staff or faculty member giving you permission to walk through the door.

The building that houses MVPL, built interestingly enough with Andrew Carnegie’s money between 1897 and 1904, is in serious disrepair. The men’s bathroom is nearly always out-of-order, and the collection of Mount Vernon history materials has been closed for years. A friend recently commented on the fact that an older man relieved himself in the snow after leaving the library before going back in to do his whatevers. The money is simply not there to build a brand-new home for one of the largest collections in New York State.

Still, I know how good a library Mount Vernon has. It carries the first three of my former advisor Joe Trotter’s books. I have to go to a university library for that around here. It also has my memoir, and it may have Fear of a “Black” America as well (not so sure about that). I just know that the affluent of Montgomery County have never put that much in resources into the library system I frequent now. I hope and pray that the folks raising the money MVPL so desperately needs for a major renovation, maybe even a new building, are able to meet their goals before my son is old enough to remember when libraries actually held bound books in their collections.