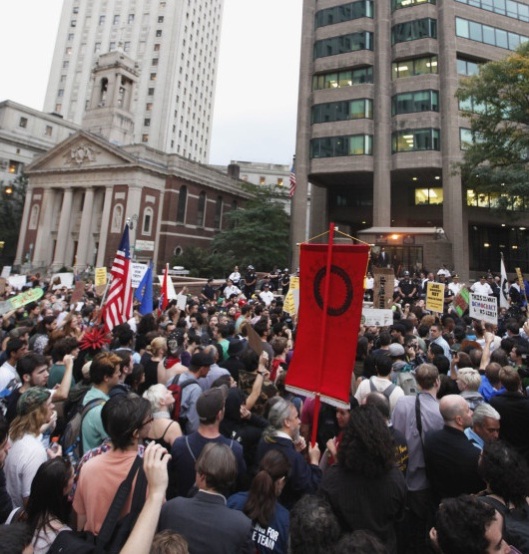 Folks like me have been saying for years that we need a mass movement of people to stem the tide of economic and racial inequality that this country, the Land of the Thief, um, Free, has been experiencing for more than four decades now. Finally, it’s happening, albeit in a relatively small way, around Wall Street and other cities around the country. This is great, I certainly wish I could be there, but this can only be the start of something. Because if it ends here, I don’t want to wait until I’m in my sixties to see grassroots protests cut across racial, socioeconomic (again, relatively speaking) and other lines that tend to divide us as a nation.

corporate office in this country. We need to say to these folks, and the corrupt, greedy, soul-destroying interests they represent that were mad and we’re not gonna take it any more.

I just want two other things to come out of this, even if the evil capitalists manage to bash every protester and faceless writers like me in the head to stop what’s been happening over the past few weeks. One is that I want the folks from my youngest sibling’s generation to get credit where credit is due, to not hear from the idiot Baby Boomer crowd about how what they’re doing is just like what they (and by they, about 1 in 50 Baby Boomers, really) did back in the ’60s. It’s not. People born in the ’80s and ’90s grew up in a nation of diminishing resources, increasing economic inequalities, increased acceptance of bigoted, xenophobic, me-first-and-always behavior and a willingness to squander trillions of dollars to go to war in our name.

If anything, these protesters are more like the factory workers at GM in 1937, who sat-in for forty-four days amid violence and threats of violence for their labor union rights in Flint, Michigan. Or like the African

Americans who desegregated lunch counters, boycotted stores that refused to hire them, and staged work stoppages at military ports during the Depression and in the middle of World War II. It’s relatively easy to protest a war like Vietnam from a position of strength, as already enrolled-in-college students. It’s not so easy when your future truly hangs in the balance.

A few months ago, I was playing with my son and one of his stuffed animals, a penguin Pillow Pet. I realized one evening that this Pillow Pet had many of Michael Moore’s facial features. So I began to talk like Michael Moore about the need to stop the greedy folks on Wall Street from eating all of our cake. My son said, “I do not understand what you are saying. But that doesn’t sound nice.” In response, I said, “It’s not suppose to be nice. But then again, neither are the people who’ve put people out of work.” It provoked my eight-year-old, if only for a moment, to think about inequality. The other thing I hope is that this protest provides more thought-inducing moments, for both of us.

1 thought on “Occupy Wall Street (and the Fed, and Capitol Hill…)”