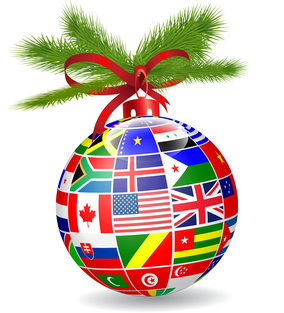 At my chiropractic appointment yesterday morning, my bone-cracking doctor of fourteen years and I got into a discussion of our holiday plans over the next couple of weeks. Her and her family will visit with extended kin in Virginia, while we’re heading to Pittsburgh to see my in-laws. During our conversation, my chiropractor brought up some of the family traditions she’s preserved with her handful of Christmases with her young daughter and two sons. Traditions like Danish pork roast for dinner, ornaments and other hand-me-downs from her grandparents and other ancestors as part of trimming the tree.

“I wouldn’t know anything about traditions. Matter of fact, there were eight years growing up where we didn’t even celebrate Christmas,” I said, with no forethought about what her reaction might be.

“Oh, I’m so sorry,” my chiropractor said in a quiet yet somewhat shocked tone, as if I’d ruined the Christmas spirit for her kids.

“That’s what happens when you go up in poverty,” I said apologetically, realizing that I might have cost my chiropractor some peace of mind this holiday season.

Even at nearly forty-six, I can still say things without thinking, causing others to have to think more than they normally would. Sometimes, it’s without intent or malice, sometimes it’s because I don’t give a crap what people may think. Regardless, it’s certainly not because I want people to feel sorry for me or to give me a hug.

The truth is, the only holiday traditions I have come either from my wife or her family or were born out of my circumstances. Like making super-sweet, two-packs of Fruit Punch Kool-Aid and mixing it with either ginger ale or Sierra Mist for either Thanksgiving or Christmas. Or getting our son’s Christmas presents ready for him without him knowing the night before. Or me making some holiday/birthday cake for me and us (since my birthday is two days after Christmas). And often going to a soup kitchen, homeless shelter or other venue to give away clothes, toys, money, my time in knowing that no matter how I might feel about my life, plenty others have it much worse.

The truth is also more complicated than simple poverty. Up until my eighth birthday in ’77, my Mom and me and Darren (with either my father or my idiot stepfather) celebrated Darren’s birthday, Christmas and my birthday as separate or nearly separate events. Some of my best times growing up were those days. Then, when the hyperinflation of the late-1970s kicked in — along with a second marriage and two more mouths to feed — Christmases ’78 and ’79 consisted of a fake two-foot table tree, a new shirt or sweater and a new pair of slacks. There were no birthday celebrations for me.

A contemporary Candelabrum in the style of a traditional Menorah. United Kingdom, Chanukah service, December 2014. (Gil Dekel; http://www.poeticmind.co.uk; via 39james via Wikipedia). Released to public domain via CC-SA-4.0.

Between Christmas ’80 and Christmas ’88, we didn’t even have the fake dwarf tree. Of course, four of those years we were Hebrew-Israelites. But there is this holiday known as Chanukah that also occurs in December, in which Torah believers celebrate the Festival of Lights with eight days of gifts and giving. But these were also the worst of our poverty-stricken years, and we could barely afford one candle for the menorah, much less eight or nine. The best gift I got those years was my idiot stepfather being out the apartment at 616 and on the prowl for other victims for his fast-talking nonsense about making money and living a godly way-of-life. I also attempted suicide on my fourteen birthday, not exactly a tradition worth repeating.

Finally, in December ’89, we had our first Christmas at 616 with my Mom having divorced my now idiot ex-stepfather. She bought a fake full-sized tree. I bought my four younger siblings gifts big and small for the holiday. My mom even made me a Duncan Hines chocolate cake with vanilla icing for my twentieth birthday that year. We didn’t have much, but what we did that year meant so much as we moved into the 1990s.

In all of my adult Christmases, I’ve actually only done one in Pittsburgh prior to our trip coming up in eleven days. It was Christmas ’98. That week, perhaps the only important tradition I’ve ever been a part of began. I moved in with my then girlfriend Angelia, mostly as a cost-cutting measure, partly out of love and concern for our respective futures. We’ve been living together and celebrating the holidays ever since!