This was what I wrote for my first blog post on my former Fear of a “Black” America website on Monday, June 4, 2007.

It had taken me a month of brushing up on my HTML and a week of negotiating the code between Blogger.com and my former website (hosted by Earthlink) to embed my blog page. All so that I could post for the first time.

I was transitioning from being the writer and “recovering academician” on multiculturalism to the writer I am now, I guess. But I didn’t want to lose a website I’d spent months of self-taught HTML time and energy developing, and years of additions to attract views, comments, and the occasional interview. At the time, FearofaBlackAmerica.com averaged 1,200 unique visitors a month, after a high of 4,000 per month through 2004 and 2005, mostly the result of pumping my first book. Or possibly, the confusion between my book title and PE’s 1990 album, Fear of a Black Planet, but given the feedback, it was much more the former than the latter. 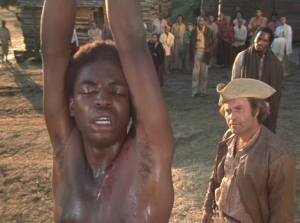 Kunta Kinte being whipped, Roots (1977) screenshot, July 6, 2012. (http://irvine.wikis.gdc.georgetown.edu). Qualifies as fair use under US Copyright laws because of screenshot’s low resolution.

So I went for it, not knowing if anyone would read any of my words, feel any of my emotions, or ever express a thought in support, solidarity, or disagreement. Once I started writing about poverty, racism, and child abuse while growing up in Mount Vernon, New York, though, it didn’t take long for random folks to start sending me missives about how I “deserved” my stepfather beating me up, or how grateful I should be for growing up in a city where Denzel Washington once lived. The kind of respectability politics bullshit that writing about a childhood full of pain tends to attract.

It wasn’t until I moved my blog to WordPress in 2010 that the work of writing and adding multimedia to my musings really took off. It helped that I managed to use contemporary events to tell my story, to provide commentary on human depravity beyond the world of research. By 2012, I was averaging more than 12,000 views a month, and had more comments from folks about my blogs than I could respond to in a timely manner. Excerpts from some of my blogs even made it into social and mainstream media.

Overall, there have been over 250,000 unique visitors to and 300,000 views of my blog off both the Blogger and WordPress platforms over the past decade. With this one, I’ve written 944 total posts, about 900,000 words since June 2007. Among my most popular are

I think that this is a good representation of what my blog has offered me as a writer and, hopefully, the tens of thousands of folks who read my musings every year. I have no idea what this blog will turn into over the next couple of years, as I continue to pursue more and more freelance writing projects, and maybe even, another book. But I thank all of you for your support, your criticisms, and your reads and views over the years. May I never take this for granted.