C-SPAN Video Player - President Obama News Conference on Tax Cut Agreement Screen Shot, December 8, 2010. Donald Earl Collins. Qualifies as fair use under United States copyright law because screen shot is of low quality and is only intended to highlight the subject of this post.

In a post I did during President Obama’s campaign run (see “The Avatar State” post, July 22, 2008), I dared to hope that the then energized candidate and senator would be a bridge that would work across the divides of race and ideology. Much like the main character of my favorite animation series of all time, Aang of the Avatar: The Last Airbender. But unlike Thomas L. Friedman’s The Lexus and the Olive Tree (1999), I don’t purport to have a special wisdom about how he can do this.

And like the animated series, Obama’s run for president also came to a successful end. For both the creators of the series and our beleaguered president, it was time for the big time. For one, it was the opportunity to do a live-action, big screen movie to introduce the epic nature of kids embarking on a journey to save the world to a larger audience. For Obama and his group, it was the chance to govern based on the ideas and ideals that they communicated successfully to nearly 67 million voters.

Unfortunately, both have disappointed, and not just a little. James Cameron managed to wrest away the very title of the movie — Avatar — from the Avatar: The Last Airbender creators Michael DiMartino and Bryan Konietzko, even though his movie was merely a dream at the time that series had begun in ’04. That, and settling for M. Night Shyamalan as director turned The Last Airbender into an irrelevant movie that hurt the brand, while inadvertently helping Cameron’s Avatar make money-making history.

Poor Noah Ringer as Aang of M. Night Shyamalan's The Last Airbender Screen Shot, December 8, 2010. Donald Earl Collins. Qualifies as fair use under United States copyright law because screen shot is of low quality and is only intended to highlight the subject of this post.

The Obama Administration also began conceding its brand within weeks of reaching office. They say that governing dilutes the rhetoric of campaigns, and even hopeful me maintained enough jadedness to realize that. Yet to see how quickly Obama and his administration moved from action on the stimulus bill to a bunker mentality on virtually everything else was a bit distressing. The picks of Larry Summers, Peter McNickol of Ally McBeal fame — I mean Timothy Geithner — and Arne Duncan to be pillars of his economic and education teams should’ve been signs. That the Obama Administration would look after corporate and rich people’s interests before it would look out for mine. That there would be little fighting for the ideas and ideals of his campaign.

Only yesterday afternoon did Obama decide to flash anger at liberals and progressives. To be truthful, some of them have been bitter and overly critical of Obama’s decisions almost from day one. But to paint all of those left of center with the same broad brush, as if we all “have the satisfaction of having a purist position, and no victories for the American people. And we will be able to feel good about ourselves and sanctimonious about how pure our intentions are and how tough we are.”

It’s a nice sentiment. Except that the president doesn’t seem to understand the difference between compromise and capitulation. As David Gergen put it on CNN yesterday, while Obama may well be right in heading off political opposition from the Tea/GOP group looking to hold Americans and him hostage, his execution of this from a communications standpoint was terrible.

We’re approaching the midway point of his first — and possibly only — term in office, and Obama has yet to take a serious stand on any principle he campaigned for in ’08. I’m not speaking as a liberal or 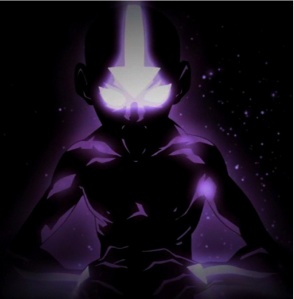 "Sozin's Comet, Part 4" from Avatar: The Last Airbender Screen Shot, December 4, 2010. Donald Earl Collins. Qualifies as fair use under United States copyright law because screen shot is of low quality and is only intended to highlight the subject of this post.

progressive here. Just look at his memoirs, his speeches and campaign promises, even the speeches and pressers Obama gave in his first months in office. Now, some of this is the result of real compromise. But after nearly two years, those compromises look more and more like concessions for the rich and corporate, and less like compromises to protect the poor, unemployed and underemployed.

Like the poor kid who didn’t have a chance in heaven to measure up to the character Avatar Aang in the Avatar: The Last Airbender series, it looks as if President Obama is having a hard time measuring up to his forty-six-year-old self. But hopefully, like the animation version of Aang, the real Obama will find his way. He needs to take a stand on something important to him and us, and do it with the bravado in which he ran on. So that even the folks who wouldn’t vote for him if God asked them to will at least get out of his way.

I’ve been reading the reviews. On HuffingtonPost, by Roger Ebert, on Twitter and so on. I’ve been watching the previews since December. I’ve read all of the articles about casting and race (see my post “Racebending Avatar: The Last Airbender” from April 2009). As of midnight in New York and L.A., the movie has finally arrived. And for most fans of the greatest animation series ever, The Last Airbender‘s DOA, SOL, and FUBAR, all wrapped into one. M. Night Shyamalan, who hasn’t done a great film since

Sixth Sense in ’99, should’ve used all six of his senses before agreeing to wield a cleaver to a show based on multicultural authenticity and a sense of humanity only matched by its revealing humor.

The truth is, this isn’t all Shyamalan’s fault. Michael DiMartino and Bryan Konietzko, the creators of the animated series Avatar: The Last Airbender, sold their movie rights and creative direction for this movie so easily and cheaply. They may as well have been the McDonald brothers selling what’s now McDonald’s to Roy Kroc back in 1955. The producers of the film and Paramount Studios should be shot with a turkey for letting a live-action film based on an animated series — which almost never works out — make it to a CGI board, much less a screen.

But even with all of that, the picking of mostly White actors to play multiethnic roles was horrendous. The making up for this by making all of the actors playing Fire Nation characters — the bad guys — Maori and South Asian was another sign. Not at all dissimilar from the constant complaints about Star Trek: Nemesis (2002), the last of that long-running franchise. The special effects of fire and water-bending — not so special, in the words of Beavis and Butthead. And 3D effects? Huh? Really?

This shows how cynical the world that controls what we see and hear is. They think that the consuming public is so stupid, our kids so demanding, that they can serve us slop out of a garbage can with a fungus-covered plastic spoon, and then expect us to like it. It’s still a world in which our heroes and villains must look and act a certain way, our appreciation for anything not overtly American gets thrown out of a window, our need for the bombastic more important than our need for the authentic.

The real jaded-ness here, though, is that The Last Airbender wasn’t made with fans of the animated series in mind, the majority of whom are teenagers and adults. No, this movie was made for the five to ten-year-old set, the ones who may or may not have seen the Nicktoons replays of Avatar: The Last Airbender. But even the kids who have seen the series cannot appreciate the layers of complexity in the show, the richness of the characters, or the overall dialogue of the series. That’s what folks like Shyamalan are counting on.

My son was asking about The Last Airbender this morning, because he thinks that it’ll be like the animated series. Soon to be seven, Noah has a more thorough understanding of the series than most his age. But he doesn’t know how bad this movie is. If I’m pushed to or if he begs, I might take him, if only to show him how a good series can be turned into a horrible film. Then I’ll ask Shyamalan to give back his salary for making such schlock.