I may have developed my sense of thinking on the issue of inclusion and migration from the ostracism I experienced via the cool class of Black classmates from Mount Vernon High School. Maybe. Maybe not. But, it was on this date 31 years ago that the Class of 1987 graduated. And, within minutes of us tossing our mortar-board caps in the air, people who were the “cool ones” in the graduating class began ignoring my greetings and staring through me like I was invisible whenever and wherever I saw them. A silent treatment that I went through for two summers with this group.

This is not unlike the way the media and this 45 presidency deals with most marginalized Americans and the daily indignities and atrocities from which they suffer. Especially those who migrate without papers and those would-be-migrants and asylum-seekers. The amping up of a policy that separates parents from children at the US-Mexico border is nothing short of kidnapping and taking hostages. However, the policy isn’t entirely new, and the media coverage of it until a week and a half ago was scant. President 45 and his minions had truly believed that they could keep something like this under wraps, because undocumented migrants and asylum-seekers have no representatives, no voice, and no support among many Americans.

The cries of outrage across this country have proven them partly wrong. Still, the “cooler” — really, crueler — class of Americans, White, White privilege, White patriarchy, Whiteness-is-always-right-thinking Americans (which unfortunately also includes Americans of color) remain all for body snatching. They have either been silent or have made some lame-ass excuses for fuckery worthy only of superficially-cool high school graduates.

I’m reminded of the first time I saw America’s cruelty in kidnapping kids and tearing apart families. For me, it started with Roots in 1977. I watched through Kunta Kinte’s  capture and Middle Passage across the Atlantic, his arrival in colonial Virginia, and later, the selling off of his daughter Kizzy to a slave owner who raped and impregnated her with Chicken George. Kizzy (played by Leslie Uggams) never saw her father alive again (she’s somehow able to visit her father’s grave, though), and her mother Bell is sold off to some Deep South plantation. 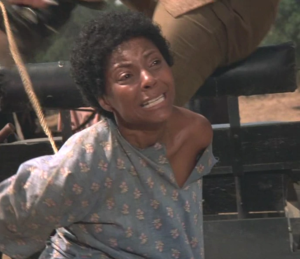 At seven, I cried at least three times watching this. At ten, when I saw all of this a second time, I cried and got angry. Especially at Sandy Duncan’s character, Missy Anne. Because Kizzy had the audacity to have a boyfriend and attempted to help him escape, Missy Anne shunned Kizzy and put up no protest as her father sold off her childhood playmate. And I learned that this is how nice people do people like me, especially the times when we need their help the most.

Later, I learned about the Fugitive Slave Laws. I learned how Congress, starting in 1793, passed a series of laws making it possible for every White American to act as a secret police. Whites were on the lookout for runaway African slaves in places as far-flung as Charleston, South Carolina, Bangor, Maine, Buffalo, New York, and, by the 1850s, Arizona Territory and California. The assumption of African enslavement was so pervasive that thousands of free and freed Blacks could end up being sold and re-sold into slavery, merely because some random White person wanted to make an extra $10 in the 1830s (12 Years a Slave comes to mind here).

Later, I’d learn about the Trail of Tears, Indian Removal, and the long, bitter march of indigenous peoples onto reservations between the late-1820s and 1890. A population of perhaps three million Native Americans reduced to 250,000 by the time of the 1900 Census. All federal policies as the US Army executed them. All so that mining interests could get to gold and coal, all so that railroads could be built. In the process of assimilating “the savages,” the federal government also snatched thousands of Native American children from their tribes and families and put them in boarding schools. With White families all too willing to teach them to forget about their long and proud histories, languages, and peoples.

But before learning all this, I also learned through my mom’s years on welfare just how easy it could be for a government and willing neighbors to have children and parents separated. More than once, a social worker swung by in the years between 1983 and 1990 to inspect my younger siblings, to make sure there wasn’t a man in the house, to ensure that my family’s deep poverty was real. More than once, a neighbor would threaten to call Social Services on my mom (and at least once, on me when I was a teenager) because my four younger sibling kept up too much noise. The policies that now comprise what some experts call “Jane Crow,” of separating allegedly neglectful and abusing parents (mostly Black women) in the name of protecting children, were very much alive and well during my teenage and early adulthood years. Because of course, poverty in America to the point of needing a few dollars and some Food Stamps is illegal. 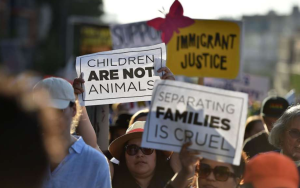 With all this history of breaking up families to control African slaves, free Blacks, Native Americans, and poor people, why would the sudden ramping up of separating children from their parents at the US-Mexico border surprise anyone? It doesn’t surprise me. ICE has been brazen in their modern-day execution of its Fugitive-Slave-Act-esque charge to “round up all the illegals.” The White House has 45 and an army of minions who spend every waking moment of every day figuring out ways to quash dissent and foment support for policies that would make the US a Whites-only country.

But for all this to work, there have to be millions of Americans willing to help them. And there are. Some out of pure ignorance, some out of willful ignorance and denial, and some because they are racist sociopaths. All, though, are fully steeped in the idea that America would be better off if Whites remain the majority, if White men and White women sire most of America’s kids, and if all the Black and Brown people submit to their rule and oppression with bright smiles.

People, America isn’t becoming a fascist state. For so many of us, America has always hung in the balance between freedom and fascism. Fascism for Americans of color, and freedom for good, Christian-as-racism White folks. This. Is. America.