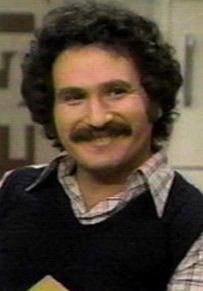 Gabe Kaplan as Kotter (an image sub for my former boss)

“You’re a real piece of work,” my former boss Joe Carbone said to me one day, about this time twenty years ago. He smiled when he said it, though, which made me take the statement less seriously than I would’ve otherwise. It was my introduction to the politics of my new workplace for the summer of ’90.

For ten weeks between June and August ’90, I worked at the main office of Westchester County’s Department of Community Mental Health in White Plains. My immediate supervisor that summer was Joe Carbone, a highly-placed higher-up in the department. It turned out that he lived three blocks from me on East Lincoln in Mount Vernon, and that one of his kids graduated a year ahead of me at MVHS. Small world as usual. That gave us a little something in common.

When it came to work, though, I think our styles were a bit different. I worked as hard and as quickly as I could to finish the database-related projects he’d assign, then I worked as hard as I could to get to know the other staff and the other aspects of the office. And when that ran out, I’d work on getting ready for my senior year and my project on the resegregation that occurred in magnet schools in the ’80s. It was in that context that Carbone had called me “a real piece of work.” I guess I didn’t look like I was working that hard. Or maybe it was too obvious that I found my school research more interesting than my database work. Or maybe he just envied the way I used my time when I ran out of things to do (or things to make up to do, for that matter).

Whatever it was, I wasn’t the model worker, at least in the sense that I worried about my job, about pleasing my bosses more than the quality of my work, about making things merely look good. Carbone may well have been saying as much, constantly comparing me to some guy who worked for him in ’89 who was a junior at Yale. Like the Ivy League moniker alone was supposed to impress. If there had been one thing I learned in three years of college, that differential equations, primary resource grad-level research papers, and scholarly monographs looked about the same in the hands of a good Yale or Pitt student. I was glad to hear those comparisons go away after my first six weeks there.

Still, despite this “real piece of work” issue, Carbone remains the best supervisor I ever had. He made my tasks and duties clear, gave me room to work and make mistakes, introduced me to a wide variety of colleagues and work styles, and, if the mental health field had been my passion, would’ve been a great mentor for sure. He was my Kotter and I saw myself as his Horshack.

Yesterday also reminded me of the contrast between someone like Carbone in the workplace and the people I worked for when I was a manager in a social justice fellowship program in DC nine years ago. We had a meeting with our funder in New York in June ’01. Having met with funders before, I already knew the deal, and had explained that deal to the program assistant and associate in the days leading up to the meeting.

But apparently that wasn’t enough. My immediate supervisor and his all-wise supervisor’s supervisor and so-called mentor (henceforth known as Ms. Wisdom) had us meet twice to discuss this meeting and what each of us were to discuss, right down to the exact words we should use. They discussed protocol and etiquette, as if we were in nuclear disarmament talks with the former Soviet Union, China, North Korea, Iran and Israel all at the same time.

When I pointed out at the second meeting that these meetings were in fact redundant and panic-inducing — very politely, I might add — I got pulled into the superintendent’s office and accused of not taking the meeting up in New York seriously. Ms. Wisdom told me that I could quit at any time, and that she “would be around long after” I was gone. At least she was wrong about that prediction.

It made for a very stressful preparation for a meeting about the state of a program that had only been around for two years. Still, despite the lack of sleep, the micromanaging and threats, I felt ready, and I hoped that the other staff were ready as well. None of that

mattered, though, once the meeting in New York was underway. My immediate boss was so keyed up that he literally did all of the talking for our group of six. When I say all, I mean all except for two comments from me, one from Ms. Wisdom, and one from our program associate. By the end of the two hours, I thought that the man would’ve jumped on the conference table and done a jig for an additional $100,000.

My ex-boss was euphoric of course, even though the director at the time (now the executive director of the ACLU) specifically said that we “should consider looking for alternate sources of funding” for the program to ensure its viability after 2004. I thought then that he and Ms. Wisdom were real pieces of work. Even at the time, that reminded me of Joe Carbone, and gave me something to smile about. Maybe I’m a real piece of work, too. But at least I’m one in progress.