I get so tired of so many “journalists,” commentators and columnists saying the same thing over and over again. About the 2012 Presidential Election, about education, about race relations, about crime, about virtually anything anyone with a working brain cares to think about.

For more than four decades, our media has become like the color commentators for an old World Wrestling Federation (now WWE) event between “Rowdy” Roddy Piper and Hulk Hogan. Where the mere appearance of journalism and fairness has become more important than any actual substance. Where pitching fake debates about actual facts about real events and trends is normal business. Overall, the news industry — TV, print, radio and Internet — is about as professional an operation as a hole-in-the-wall bar attempting to become a strip club. 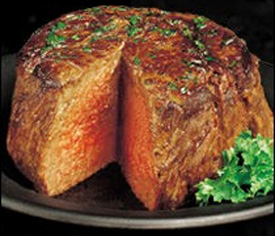 “If it bleeds, it leads,” whether it’s Ruth Chris Steakhouse or the mainstream media, October 17, 2012. (http://sanfrancisco.com).

Jay Rosen’s ’99 book What Are Journalists For? and Don Henley’s ’82 hit “Dirty Laundry” have plenty in common. They both unmask the news business as just that, a business. All of these ideas about objectivity, access and coverage for mainstream journalism in all its forms are just that, ideas. In actuality, news has grown into another form of entertainment, sometimes in the most literal sense (read The Onion and watch The Daily Show and The Colbert Report as but three examples).

Perhaps the most glaring falsehood of all is that the media is a mere reflection of society, and that journalism’s role is to be the mirror that stands apart, reflecting both the light and the darkness of our world. Both Rosen (in a scholarly tone) and Henley (with sarcasm-dripping lyrics) call bull crap on this idea.

There are too many lies that the media tells itself for me to go through all of them in one blog post, but there are particularly pernicious ones that I need to address here:

1. The built-in “liberal media bias:” This one is about as true as “dolphins fly” and “parrots live at sea” (thank you, Stevie Wonder). Fact is, the news media, with the exceptions of FOX News, represents a centrist view of the US and the world. Period. When’s the last time anyone has heard CNN discuss creating a single-track Pre-K to twelfth grade college and work preparation school system? Since when does the New York Times recommend the legalization of marijuana or the decriminalization of heroin and cocaine? Has the Washington Post ever suggested that America’s imperialist foreign and economic policies were the ultimate reasons for 9/11? These are all liberal positions, and yet, they get next to no play except maybe on non-mainstream TV and rags, liberal talk radio and progressive blogs.

2. The media’s goal is “objectivity:” Are we really that daft? Scholarly objectively went out the window in the humanities and social sciences in the ’80s, because it was obvious that scholars are actually, well, people. Last I checked, journalists, commentators, editors, columnists, anchors and talk show hosts are, too. Their collective main goal – to sell a story to the public (or, in many cases, to others in the media world), and overall, to make money for their newspaper, radio station, news channel or website. For if the business makes money, folks in the media get to keep their jobs and their prestige.

3. The “both sides do it” argument: The fact that the media has turned into about five different monopolies has led to this idea that there are two equal and opposite sides to everystory. It’s been true of the mainstream coverage of this election, but it’s applicable to everything they show the public. Climate change, some say “yes” (as in 99.8 percent of all scientists) and some (scientists paid off by Scaife, Olin, and the Heritage Foundation) say “no.” Trayvon Martin, was he a victim or a thug? Look, we all know that life has much more gray than the media is capable of capturing, but most rags and news outlets have long given up trying to provide a full story. All in the name of selling more newspapers, driving up ad sells and pushing up Nielsen ratings.

4. People in the media world are intelligent and sophisticated: This one is a keeper. To be sure, there are plenty of brilliant folk associated with CNN, MSNBC, The Huffington Post, and the New York Times. But most journalists aren’t as smart as we tend to assume. Fact is, journalists are good at two or three things: asking lots of questions, looking professional in front of a camera and writing in middle school sentences. I could’ve done two of these three by the time I finished sixth grade. Since most folks in news spend most of their time talking with each other, their brilliance is self-evident. They certainly don’t need to check in with us for our approval.

I’m sure that the likes of Megyn Kelly, Soledad O’Brien and Tom Friedman won’t be reading my blog to see what I’ve said about their business. After all, they have the pen and the mic, and I’m just an aspiring writer and professor with a blog. But I know something they don’t. You can’t live in the world of make-believe forever.