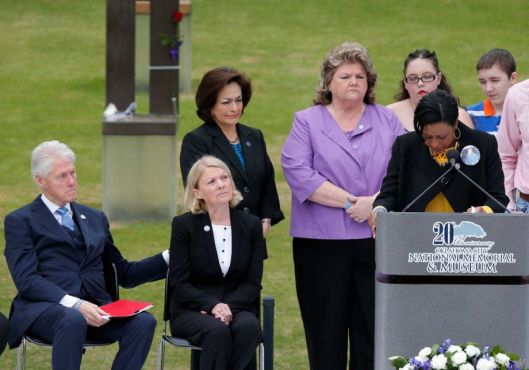 Helena Garrett, right, mother of bombing victim Tevin Garrett, breaks down as she speaks during a ceremony for the 20th anniversary of the Oklahoma City bombing, Oklahoma City National Memorial, April 19, 2015. (Sue Ogrocki/AP via http://sfchronicle.com).

Americans can be so stupid. It’s been  twenty years since Timothy McVeigh left a Ryder van in front of the Alfred P. Murrah Federal Building building in Oklahoma City filled with two and a half tons of ammonium nitrate and fuel to blow a tragic hole into it, leaving 168 women, men and children dead. It’s been  sixteen years since two White male teens decided to lock and load at their high school in Columbine, Colorado, leaving 12 students and a teacher dead, 25 others wounded, all before killing themselves in a blaze of White male angst glory. Yet we’re still up in arms over any significant legislation to keep assault guns out of the hands of folks who may do their neighbors harm, as if the Second Amendment doesn’t itself provide limitations on the use of firearms in our society.

Right now, without any abatement, some idiotic father or mother is so depressed about their financial situation and the future of their family that they’re willing to go into their garage, pull out the 9mm pistol or .45 caliber rifle and take out their children, their spouse and themselves in a public display of psychotic-ness. It’s happened in recent months in Chicago, in Maryland, in California, in Florida, and in so many other places that the public only barely pays attention to it anymore. Then there are the folks who are literally clinging to their guns — if not their religion — because the nuts on Fox News Channel and on the conservative talk radio shows have stirred them up about President Barack Obama. That the Obama Administration had any plans to take people’s guns away from them is about as ludicrous as blaming the grunge group Pearl Jam for the Columbine massacre in ’99. 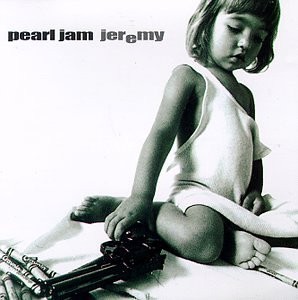 To think that it’s been more than a decade since Columbine and that we as a nation have learned next to nothing from it is just a sad commentary on how fearful we as a nation are. I remember as I packed my bags for my presentation at the Organization for American Historians conference in Toronto how the events of Columbine unfolded. One of the first things that came out of the media was that songs like Pearl Jam’s “Jeremy” was to blame for stirring the minds of Eric Harris and Dylan Klebold into killing and maiming their unaccepting, cliquish classmates. Except that “Jeremy” killed himself in front of his classmates. He imploded — he didn’t take his rage and angst out on the rest of the world.

Harris and Klebold’s disproportionate response had little to do with Pearl Jam or grunge, and more to do with our culture of fear, as explained by Michael Moore in Bowling for Columbine (2004) through Barry Glassner’s The Culture of Fear (1999). When combined with easy access to guns and other weapons, it’s no wonder why events like Columbine and Oklahoma City, Virginia Tech and more recent ones in Binghamton, New York, Tennessee, Alabama, Pittsburgh, Oakland, Newtown, Connecticut, Aurora, Colorado and so many other places across the country are happening regularly. Kind of like the bombings and shootouts that have taken many a life of American soldiers while keeping Iraq safe for democracy since ’03. In our case, all it took was a severe economic downturn and the election of President Obama to produce disproportionate fear and rage, implosion and explosion, family annihilators and gun-hoarding psychopaths.

I would’ve thought ten years ago that Columbine would take the Brady Bill passed by Clinton and Congress in ’94 a step further, but it didn’t. I would’ve thought that Americans might become more willing to be introspective in considering the reasons for all of our senseless democracy-based violence. But we haven’t been. We haven’t even conducted national townhalls on these issues. We’ve allowed the NRA, gun-makers and others who benefit from the proliferation of assault weapons to dictate how we exercise our Second Amendment rights. 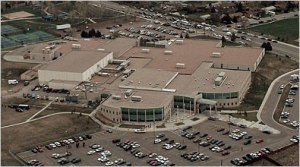 There were the kinds of things I thought about during my five days in Toronto, which seemed as far away from the violence and fear of the US as Rome at the time. I also thought about my experiences in middle school and in high school. I wasn’t bullied, at least in not any physical way. But I felt ostracized at times, and I was certainly made fun of more times than I could count. I didn’t have access to guns, and it never would’ve occurred to me to shoot the folks who were clownin’ me. In later years, in seeing signs of the US melting down economically and culturally, it wouldn’t have been in my thought process to blow up a federal building, threaten the president or another public official, or otherwise arm myself for a coming race war or war against the federal government.

No, what I thought about while in Canada was how peaceful and settled it seemed compared to anywhere I’d been in the US. I didn’t feel my skin color or race the way I usually felt it as an American citizen in America. I loved the multicultural atmosphere and the fact that folks truly embraced it there, and not just by serving hummus and falafel at parties and by taking yoga classes. If I could, I’d move all of us up there to live a less fearful and more accepting lifestyle than the one that we can live here. 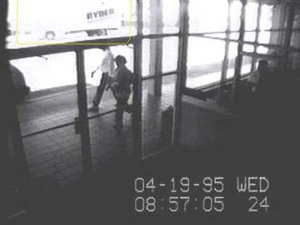 Somehow, some way, we as a country need to find ways to deal with our fear of each other, of failure, of the loss of power and dominance as a nation among nations, as Whites over everyone else. Confronting these fears as part of a public display of transparency and openness will allow for angst without implosion or explosion, and dissent without a turn to ridiculously senseless violence. This is the reason why we have so many dead and wounded every year from gun use (though not usually bombs), in everything from homegrown terrorism to everyday acts of community annihilation. If not, we will continue to serve as a model of first-world dreams and third-world chaos, offering the world not much more than our hypocrisy in the process.