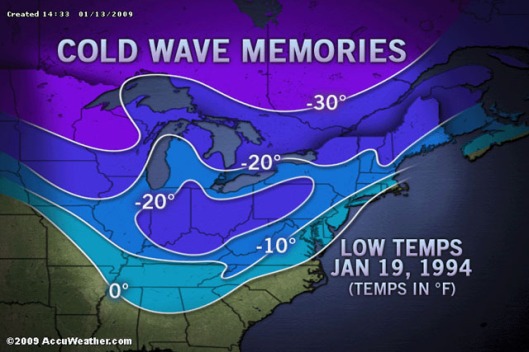 This week’s so-called polar vortex is hardly the coldest weather I’ve ever experienced, whether living in New York, Pittsburgh or DC, or visiting places like Chicago and New Hampshire in the dead of winter. But like all things driven by traditional and social media coverage, anything that happened five minutes ago becomes the penultimate event of all time.

But imagine a day that was so cold that when the temperature rose to -20°C (that’s -4°F) three days later, it felt like a heat wave. A day that produced multiple states of emergency for much of the country. A day where your windows had thick sheets of ice on their panes, and your breath turned into icicles before you started to take in air.

I’m remembering a day twenty years ago exactly like that, one very different from the current cold snap across much of the Northern US right now.  And yes, the term is and will always be cold snap, as a vortex conjures end-of-times climate change similar to the movie The Day After Tomorrow (2004). Torrents of snow fell in the ‘Burgh, in New York, in Chicago and DC. So much snow fell in Pittsburgh that both Pitt and Carnegie Mellon shut down — something that only happens on near apocalyptic days. By the end of that month, Pittsburgh had already set a seasonal record for snowfall at 96 inches. Of course, that was nothing compared to Chicago, Cleveland or Buffalo that winter. 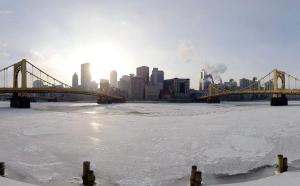 I awoke to a cold studio apartment on January 19, even though the heat was at full blast and I’d sealed my windows with plastic. I turned on the TV, and found that the Pennsylvania governor had declared a state of emergency because of the cold and because the state’s electrical grid was on the verge of collapse. All businesses, schools, and colleges, as well as all non-essential state work, was to stop that day to preserve energy so that we wouldn’t freeze to death. To a business, everyone complied with the governor’s order.

Everyone except Carnegie Mellon, that is. They cited that they were a private and not a state institution as the reason for them not shutting down that day. Never mind that students who lived off campus would have to brave the killer temperatures to come to class. Or the fact that Pitt, a private institution with far more students than Carnegie Mellon, only two blocks away, was completely shut down. Or the fact that Carnegie Mellon, like the rest of the state, relied on the same overloaded power grid and was stretching limited resources.

So I prepared to go to my 2 pm course. Normally I would’ve walked the 2.75 miles from East Liberty to campus. Even I recognized that -22 was too cold for me to be out in for more than a half-hour, and this a forty minute walk for me in the ice and snow. I wore long-johns and sweats, two layers of socks insulted in plastic Giant Eagle bags that I’d put in my high-tops. I wore six layers of upper body clothing, snapped my hood on my winter jacket, pulled down my black wool cap to my eye lids, and wrapped my blue scarf around my mouth and neck.

I tried to time the bus so that I wouldn’t outside more than a few minutes. With the twenty-mile-per-hour wind gusts, it was like someone was trying to suck the life out of me. It hurt to breathe. Yet I found it funny to feel the icicles forming on my nose hairs and mustache. I took the first bus that came, the old 71C, which didn’t stop close to Carnegie Mellon, did stop right across the street from the Cathedral of Learning, about a half-mile from Baker Hall and my class.

Pitt, of course, was a ghost town. On the bridge that connected Pitt to Schenley Park and the southern entrance to Carnegie Mellon, two idiot joggers passed me, proving once again the dominance of brave alpha males in their attempts to control the world.

Upon entering Baker Hall, I was told by security that Carnegie Mellon was closing after all. I learned from the departmental office that the governor had personally called the president of Carnegie Mellon and ordered the closing under the threat of a $1 million-per-day fine, or something pretty close to that. So the elitist university was shutting down after all, at 2 pm. We could all go home. Or so we thought. John Modell decided that our classes were too precious to cancel over a little thing like a state of emergency. Now I knew that the man had taught for years at U Minnesota, so -22 for him was just a normal winter day, I guessed.

An hour later, with the heat off, we could all see our breath as Modell yammered on and on about cultural anthropology and the meaning of objectivity in that discipline. All I know was that it was way too cold to sit in a classroom wondering what would kill us first, Modell’s disjointed diatribes or the bitter cold classroom. If we’d been ten years younger, Modell would’ve gone to jail.

Finally, Modell released us from his professorial grip, around 3:20 pm. He even acknowledged that is was just too cold to continue class. “We’ll make this up next week,” he said. Yeah, as if he couldn’t have said that an hour before.