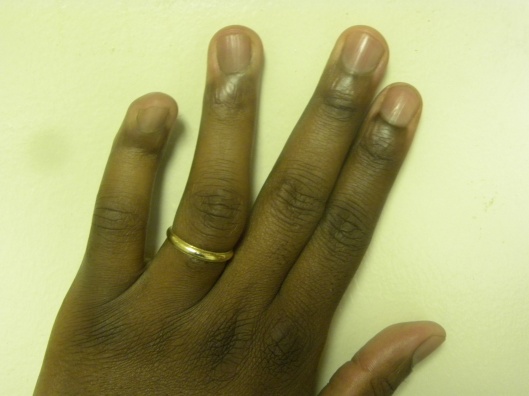 It’s been a bit more than thirty years since I’ve had surgery on two left fingers in an attempt to straighten them. These fingers are symbolic of what happens when a family slides off a cliff in the Himalayas into deep poverty, of when a nation doesn’t have an adequate social safety net or adequate healthcare for the poor.

At the very end of my glorious summer of ’82, I needed surgery on the ring and pinky fingers of my left hand to remove two benign tumors. The tumors had apparently been there since I was eight and had caused the two fingers to grow crookedly, to the point where I couldn’t use them. After the hospital strike (see my “The Quest For Work, Past and Present” post from earlier this month) and my ordeal with Maurice had ended (see my post “Boy, Interrupted” from July ’12), my mother realized that I needed to see a doctor, and within a week I was at Mount Vernon Hospital in surgery.

They removed the tumors, straightened my fingers, stitched them up and put them in a cast. If all went well, after a month, they’d remove the cast and the stitching. That, and a few checkups to check the progress and scar tissue buildup on my fingers, and I should’ve been good to go. But that happy ending wasn’t to be. After the casts came off in early September, I didn’t see a doctor again until April ’85.

Why? My mother had been downgraded to part-time status at Mount Vernon Hospital by October ’82, and after the birth of my sister Sarai in February ’83, could not work and take care of five kids at the same time. We went on welfare in April ’83, and with that, received Medicaid services. Those services, as anyone who has spent any serious time in America’s worst poverty should already know, are limited in scope, and don’t exactly cover the removal of post-surgery scar tissue. 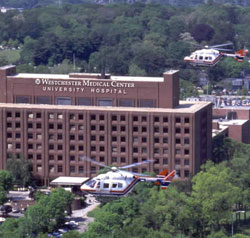 So, a year or so after my tumor removal/finger-straightening surgery, my left ring and pinky fingers went crooked again. By the time me and my mother had schlepped on the old Bee-Line Route 41 bus to Westchester County Medical Center in Valhalla in ’85, my fingers were about half as crooked as they had been before surgery in August ’82. The doctor, of course, misdiagnosed my fingers as having keloids, and offered steroids to shrink them down. Injections, by the way, not covered under Medicaid at the time.

But that wasn’t the only problem. My crooked fingers itched a lot, and made it difficult for me to make one-handed grabs in football tryouts in ’84, not to mention wearing a baseball glove for baseball tryouts in ’86. Some girls at Mount Vernon High School grilled me with questions whenever they noticed them, as if I was a Yeti who decided to visit Western civilization for the first time. One of them told me point-blank, “I can’t go with you — your fingers are too ugly.” A young woman said something to the same effect to me my freshman year at the University of Pittsburgh.

It wasn’t until the fall of ’02 that I finally saw a specialist at Johns Hopkins about my finger, one who confirmed the initial diagnosis of tumors from ’82. Between two doctors and a physical therapist, I gained about two-thirds of my total range of motion in my ring finger, but only five degrees’ worth of motion in my left pinky by the time my son was born in July ’03.

I got to the point where I could finally palm a basketball in my left hand. But ultimately, that was all I could do. It turned out that I’d have to lose a joint in my crooked fingers — to have them fused — in order to straighten them. Otherwise, there was nothing wrong with the bones. It made more sense to leave them crooked.

Maybe this is good thing, though. That no matter my past, present or future successes, that I have them as a reminder of how far I’ve come. They also serve to remind me how many others suffer in the US because of poverty.