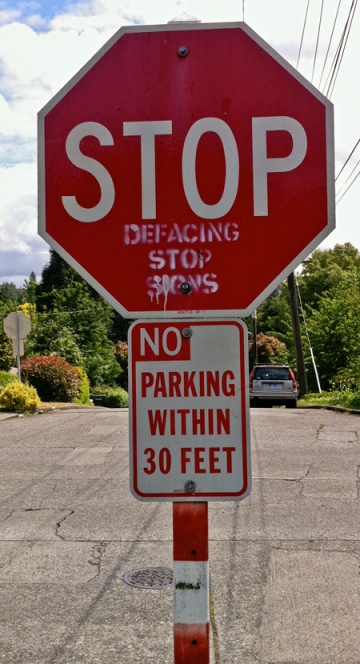 This week a quarter-century ago was my Class of ’87 senior prom. Though I may tell some of the more boring and significant stories from this prom one year, this won’t be the case this year. Especially since the days before presented themselves with a theme that has remained a constant in my life for more than three decades — irony. If irony were a food, I could feed all of the Global South with it, and still have enough left to keep me in protein and P90X recovery drinks until I turn seventy.

And irony was a full-blown buffet the week before the prom. What told me that maybe my prom date “J” wanted more out of this arrangement than I did was an incident at our Humanities Program honors convocation that Tuesday evening (see my post “Prom-Ethos” from earlier this month). Mrs. Flanagan (then the Humanities Program coordinator for Mount Vernon High School) and the Mount Vernon Board of Education wanted to honor us collectively for making Humanities a grand success.

We had a keynote speaker, one who was a recent college grad and MVHS alum who had started her own business and wanted to talk to us about the value of the education we were about to pursue. It was an opportunity for our parents to share in our success.

My Mom decided to come to this event, only the second time she’d been to MVHS in four years. We got there, with Mom dressed in her best business dress, with high heels, hair done, light-brown makeup powder and black cherry-red lipstick on. I was somewhat dressed up, with a collared shirt, cheap black shoes and the polyester black pants my mother mail-ordered for me at the beginning of the year. The event was in the school cafeteria, where we were to have punch and snacks before the festivities began.

The first person I introduced my Mom to was J, whose mouth fell open like I’d slapped her in the face. She looked at Mom as if I’d been cheating on her with Lisa Lisa.  “J, this is my mother,” I said a second time. J just stood there, angry. Then she walked away in a huff.

“What’s wrong with her?,” my mother said in complete disbelief herself, with the “her” part lingering in my ear.

Crush #1 must’ve seen the whole thing unfold, because she came over right on cue, gave me a hug, and then politely introduced herself to my mother.

“Thanks,” I whispered as I walked over to talk to J while Crush #1 had a conversation with my Mom, something I’d hoped my prom date would do.

“That’s not your Mom,” J said when I reached her table. As if I would lie about something as serious as that.

“Yeah, J, she is,” I said, pissed that she’d assume that quiet me would suddenly become bold enough to bring an older women to a Humanities.

I knew Mom looked young, but she still had twenty-two years on me. Since she didn’t want to talk about it, I just walked away and joined in the conversation between my former crush and the woman who was the reason Crush #1 was my former crush.

That Crush #1 came to my rescue was ironic and poetic, given the ways in which my muse has come to my rescue over the years. That one of my nicest classmates acted a bit like an ass that evening contradicted everything I’d seen her do and say over the previous six years. That anyone would think that low-confidence me could walk into a ceremony with a thirty-nine year-old woman was both idiotic and ironic. Yeah, even in the land of friendships and emotions, irony walked with me, hand-in-hand and stride-for-stride.