As a writer, I can often see my past as if it happened within the past week. As a forty-two year-old, though, it sometimes seems like my failures and pitfalls are a long-lost memory, one of a very bad dream. To think that it’s been a full thirty years since my preteen struggles with identity, purpose, and the realization that I was in an intense academic competition that I was predestined to lose. It seems like I was playing a role, acting my way through my tweener and teenage years.

But this time thirty years ago, I seriously thought about quitting the Humanities Program. It was the beginning of the third marking period in seventh grade at A.B. Davis Middle School, early February ’82. My grades were unimpressive. I struggled in every subject except social studies, where three years of reading World Book Encyclopedia and forty books of all kinds on World War II made me a nerdy standout among my mostly nerdy peers. My social studies teacher Paul Court was so much fun and so inept that he played games with us to keep our class interesting. Anyone who could find factual errors in his teachings on American history would earn twenty-five cents. I’d already earned more than three dollars by the end of the second marking period.

I barely averaged a C+ in math. My Italian teacher Ms. Fleming told me that my “Italian sounded British.” And I was averaging a C+ in art. In Art! All because Doris Mann, who was about as good an art teacher as I was at making friends, said, “I don’t give A’s for effort. I give out grades based on your ability to create good art.” I couldn’t believe that she gave me C+’s while the art world fifteen miles away cheered folks who smeared blood, paint, and feces on canvasses!

I thought that I was the only one who felt like a failure. I was certain that I was more of a failure than my Holmes School classmates or other, non-Pennington-Grimes students in Humanities, at least. If other students appeared to have problems, especially my classmates who were alumni of the Pennington-Grimes program (Mount Vernon public schools’ K-6 Humanities Program), I believed that they were faking it. 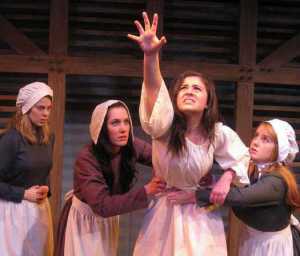 I had good reason to. It was around this time that one of my White female classmates from Pennington-Grimes had become anxiety-ridden prior to a test in our English class. She began to sweat, her hands and face turned colors, like one of Arthur Miller’s female characters in The Crucible, his famous Salem-Witch-Trial play.

Within a few seconds, three of her friends joined this tortured soul in this expression of fear. The one girl kept saying, over and over, “I know I’m going to fail!” The other three huddled around her and joined in séance, as if they expected God to witness this physical expression of pressurized fear and take pity on them. That this involved the Pennington-Grimes group of Humanities girls was not lost on me. They loved their grades, almost as much as they loved Jordache Jeans, The Gap or Benetton.

We received our exam grades from Mrs. Sesay a few days later. My grade: a 78. The Fear Bunch’s lowest grade: a 92. Understanding how quickly fear can destroy your confidence: priceless. Their fears had left me thinking more about failure — theirs and mine — than it did about the task at hand.

So, I spent the first two weeks in February thinking about sliding into the general population of A.B. Davis Middle School. I couldn’t do much else other than think. With the growing problems of lack of food, late rent payments and three siblings at 616, my mother’s tiny Mount Vernon Hospital paycheck, and my idiot and long-term unemployed Hebrew-Israelite of a stepfather, I had no one to talk to about school (see “Humanities: First Contact, Full Circle” from September ’11).

What I didn’t realize was that I hadn’t yet begun to fight. My efforts up to that point in Humanities — from making friends to studying — were all half-hearted at best. I was the emotional equivalent of an eight-year-old in a preteen’s body, one right at the early stages of puberty at that. With life at 616 starting to fall apart and the isolation I felt at school, I was growing up, whether I wanted to or not. All it would take was an immature spark of inspiration to prove it….