In little more than a week, my New York (football) Giants will play against the New England Patriots in Super Bowl XLVI, and hopefully win their fourth NFL championship. It’s good for me to watch this process unfold — again. Only without the significant emotional and psychological attachment I had to my Giants back in the days of Bill Parcells, Phil Simms, Mark Bavaro, Phil McConkey, Joe Morris, Lawrence Taylor, Leonard Marshall, Carl Banks, Elvis Patterson, and Harry Carson, among so many others.

It’s been twenty-five years and three days since my Giants won their first Super Bowl, against John Elway and the Denver Broncos in Super Bowl XXI. Or, as Dick Enberg put it over and over again, “the man with the golden arm,” who looked like Tim Tebow most of the game against the Giants pass rush. At times after that win on January 25, ’87, it seemed as if that was the only thing that went right for me that year.

Of course, that wasn’t true. After all, this was also my senior year at Mount Vernon High School, about to graduate and move on to the University of Pittsburgh that fall. But at seventeen years old, in the middle of my obsession with Crush #2, and feeling the pressures of life at 616, the ridicule of some classmates at MVHS, and the need to grasp my future, I needed many forms of escape.

The Giants had served as one major form of escape for me since the ’83 season. Yeah, their 3-12-1 season. I was neither a Giants nor a Jets fan, but after watching what had happened with both teams that year, I felt sorriest for the Giants. With a first-year coach like Bill Parcells not knowing yet how to coach his team, I just felt they had nowhere else to go but up. They hadn’t won a championship since ’56, and didn’t look like they were going to win one anytime soon.

Just like me. As an underdog in life, I already was rooting for teams that no one else would care to talk 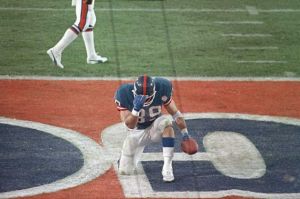 about. The Jets just looked like a team that squandered talent, they had Richard Todd, and they never played as hard as the Giants. So by the end of the year I didn’t care to watch them anymore.

I watched or listened to my Giants play football virtually every Sunday from that point on, but that didn’t interfere with my studies. It often helped me remember obscure information, especially as my ability to study at 616 complete deteriorated. Through a visual cue, like Phil Simms throwing a touchdown pass on a crossing route or post pattern to Mark Bavaro, I could remember how to solve a specific function or recall a series of “if-then” statements for a Pascal program.

Then, after disappointment in the playoffs in ’84 and ’85 at the hands of the 49ers and the Bears, the Giants won Super Bowl XXI, blowing out and brutalizing each team they faced along the way. My underdog team had become a juggernaut in three seasons, meaning that there was hope for me yet.

But it would take me a bit longer to see myself as a winner, a champion, someone deserving of a victorious life. When I did, a couple of years before the Giants’ second Super Bowl victory in January ’91, I realized that I didn’t need to live and die with any team I was a fan of in order to validate the meaning of my own life. Rooting for the Giants, win or lose, has given me a small degree of joy over the years, like a kid just enjoying the excellence of his team. How it translates for my own life is immaterial. It’s up to me to decide how much victory in my life I’m willing to fight for, and how much success I can stand.