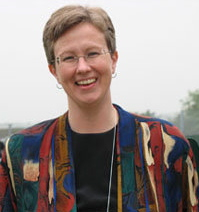 I define serendipity as the ability of hard work to create what others would consider good luck, fortuitous chances, random opportunities for success. I’ve managed to do just that over and over again over the course of my life, particularly as a student and occasionally as a writer. But as a human being in search of real, positive, life-changing connections and friendships, serendipity has been very hard to make happen. When it does occur, at least for me, it becomes one of those moments that I seal in my mind, like a note in a time capsule.

The beginning of November ’94 was one of those weeks filled with serendipity. It started with the chair of the History Department at Carnegie Mellon, Steven Schlossman. He had decided that he couldn’t make it to the 1994 History of Education Society annual meeting in Chapel Hill, North Carolina. But because he had already booked a room and a flight, Schlossman apparently figured that he could simply transfer both the airline tickets and room to me instead (back in the pre-9/11 days when you could do such things without creating a potential terror alert). So Schlossman met with me a week before this conference and said that I should go “to represent the department” and because he thought it “a great opportunity” for me. 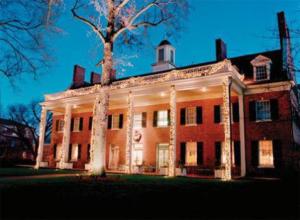 I wasn’t so sure, with the HES meeting being held in a mansion-turned-hotel, not quite on the University of North Carolina campus. Once I arrived from Pittsburgh on that first Wednesday in November, though, I felt at least free from the burdens of grad school at Carnegie Mellon. The weather was perfect, in the low eighties, and my World History sections for that Thursday and Friday were being covered by other teaching assistants. So I gave myself a tour of Chapel Hill, all the while wondering why didn’t I apply here for graduate school.

That was only the prelude to the four-day conference that began that Thursday. And since Schlossman had charged me to attend four sessions and to take notes on them on his behalf, I went to as many conference offerings as humanly possible. Back then, I had a much higher tolerance for boring academician-speak. So I was easily able to take detailed notes. I asked questions on topics in which I knew little. I even smiled and introduced myself to the mostly over-fifty White male crowd.

By Saturday, I had one mandatory session to attend. It was something about education in Japan and Germany post-World War II and how Japanese textbook makers left Japanese atrocities during World War II out of the nation’s history textbooks. During the Q & A, I asked what I thought was a pedestrian question, pedestrian because I forgot it five minutes after I asked it. Yet several people afterward told me that I’d asked a great question, as if I had some unique perspective or something. “It’s not even my subject matter,” I thought, adding in my mind that “Maybe some of these folks thought that the Black guy in the room didn’t really know anything.” 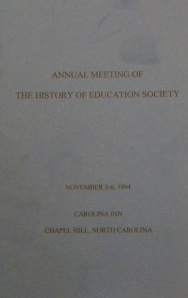 Or, as it turned out, my dedication to Schlossman’s charge made me seem 1,000 times as enthused about the HES meeting as anyone else attending. For two women did in fact notice me during that session. That Saturday evening, during beer, wine and spirits time in a cramped conference/ball room space, after pleasantries with a couple of older professors, I bumped into the two women again. They immediately engaged me in conversation, because they wanted to know how I managed to remain upbeat during such a boring ass conference.

Barbara and Catherine were both grad students in the School of Education at Penn State, as it turned out. Both were also PhD candidates in the midst of doctoral theses, and because of my being only twenty-four, couldn’t believe that I was a PhD candidate also. What I thought was going to be just another one of thirty conversations with older White male professors and kiss-ass grad students turned into a nearly ninety-minute discussion of research, pop culture, the HES conversation, and the ironies of life, and all with a snarkiness that only someone like me (or Rachel Maddow) could fully appreciate.

It might’ve ended there. Except that Barbara and Catherine’s research on federal education policy and achievement gap data for Latinos (especially Mexican immigrants) dovetailed pretty well with my work on multiculturalism and Black education in Washington, DC. Plus, the three of us saw an opportunity to use next year’s HES meeting as an opportunity to expose the hypocrisy of the old boys’ club and their petri-dish sense of educational issues for women, for communities of color, and for immigrants. We titled it, “Educational Historiography and Diverse Populations: Why Research Isn’t ‘Bringing a Pet to Class’.” Somehow the powers who ran HES accepted our proposal, giving us a chance to present at HES in Minneapolis in October ’95. 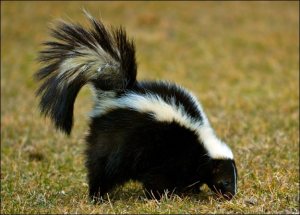 A skunk (something a teacher shouldn’t bring to class), November 5, 2012. (http://animal.discovery.com).

By that time, though, Barbara couldn’t make it, having recently married and having moved across the pond to the UK. Catherine ended up taking her place, and ended up doing two presentations in less than twenty-four hours. She’s been there for me as a genuine friend in academia and in my aspirations as a writer ever since.

The HES meetings  were the start of an eighteen-year friendship with Catherine, one that actually survived despite the tendency of the academic life to kill more friendships than one could ever start. I think we’re friends still because we share a same sense of the world, and both are willing to snark our way through the madness of it all.