Screenshot from To Sir, with Love (1967), December 3, 2012. (http://movies.tvguide.com). Qualifies as fair use under US Copyright laws – pic’s low resolution/subject matter for blog.

The dumb technocratic class (Wendy Kopp, Michelle Rhee, Steve Perry, Arne Duncan) and the assholes who fund them (Bill & Melinda Gates Foundation, ExxonMobil, US Department of Education) continue to pump out the mantra that effective teachers are the single most important variable in student performance, retention and graduation. This despite a half-century’s worth of research showing that family income was the far more important piece of data.

But even if Kopp, Rhee and Perry’s snake oil somehow turned out to be true, the fact is, the high-stakes testing movement and No Child Left Behind (and now Race to the Top) has turned effective teachers into lab leaders teaching to state-wide tests. Our current K-12 regime makes it so that ineffective teachers can be seen as effective because they’re only concerned with higher test scores, not actual learning. And some of them, not even concerned with that.

About this time thirty years ago, I had a group of wholly ineffective teachers in my tenth grade Humanities classes at Mount Vernon High School (see my posts “Half-Baked Z and Christian Zeal” from September ’10 and “This…Is…Jeopardy” from March ’11). Mr. Lewis was but one example of an unimaginative instructor. He was our Level 1 Chemistry teacher. We started his class in a very tense situation. There were fifty-one students in our class to start the year because the school administrators had failed to hire a new Level 0 (the highest level for the highest of the high-performing students) teacher for Chemistry. Our future valedictorian and other Level 0 folks spent a month protesting to the head of the Science Department, Estelle Abel, about the overcrowding and the mixing of the two levels. It took nearly two months before the situation was resolved. By that time, November ’84, none of us wanted Lewis for a teacher.

His was a class that could be fun and entertaining, but not usually educational. Sometimes our chemistry education came with errors and miscalculations. Perhaps his mistakes piled up because it was seventh period and near the end of the school day. Or maybe we were tired and inattentive. 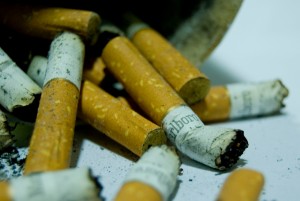 The truth was that Lewis was a teacher with a serious chemical addiction. His was a chain-smoking world. When he opened up the door to the storage room where the test tubes and Pyrex jars were, stale cigarette smoke entered the room. His teeth were a pasty yellow, and they had a film that seemed to build up on them and in his mouth by the time we had him at the end of the day. On more than one occasion, Lewis would get phlegm caught in his mouth while in the middle of one of his lectures. Then he’d pause as he gulped the phlegm, and then he kept going. It was absolutely disgusting.

One day I met with Mr. Lewis after class to discuss my struggles with the material. He was at the front lab table sitting on a stool. In front of him on the table were fifteen Marlboro cigarettes, all lit and neatly lined up in a row. During our ten minutes together, he smoked one cigarette after another, sucking them down so fast that he had to pause to clear his throat from time to time. By the time I left, he’d gone through twelve out of fifteen, and I smelled like I’d been at one of my father Jimme’s bars. I was more than sure that Lewis’ nicotine dependency was a factor in his inability to teach Chemistry to us well (Cigarettes And Coffee, by Otis Redding).

My grades for the year going into the last weeks of the school year had ranged between an unimpressive 70 and an 87. But with the New York State Regents Exam in Chemistry coming up, Lewis was nonchalant in his attempts to prepare us for the Regents. Lewis went as far as to say, “There’s nothing to worry about” on the subject of organic chemistry. “There will be hardly any organic chemistry on the exam, anyway,” he said. After eight months of listening to his blathering, I thought “That’s it!” The next time I got money from Jimme, I  bought the Barron’s Chemistry Regents exam prep book. It was just before Memorial Day, and I had a month before the exam.

On my Chemistry Regents I scored a 95, the third or fourth highest grade in the school (the highest grades were a 99 and 97 that year). My score raised my final grade in Lewis’ class six points, from a 79 to an 85. My score left me feeling jaded and disillusioned. “Wow,” I thought. “My teachers really don’t know much more than I do!” I knew that a lot of my Level 1 Chemistry classmates didn’t fare so well on the exams, because they believed Lewis when he said that there wouldn’t be much organic chemistry on the exam. By my own count during the exam, between thirty-five and forty of the 100 questions were organic chemistry ones.

It took having Meltzer for AP US History in eleventh grade for me to trust teachers again. I didn’t need anyone to teach tests to me. I needed a teacher who could help me open up a door into myself and into a world I hadn’t explored before. And millions of students — especially of color and from impoverished backgrounds — need teachers free to do that, without the threat of high-stakes tests hanging over them like a boulder.