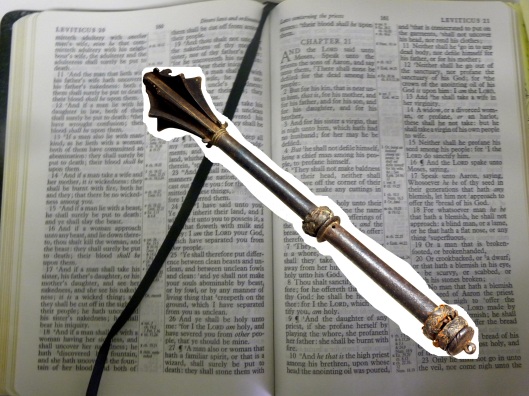 During my three years as a Hebrew-Israelite (between April ’81 and April ’84), I found more than a few of our ideas and practices confounding. So many issues around issues of blood, kosherizing food, the dangers of using Ivory Soap or saying “Hello” to callers on a telephone. I was in a cult during the most out-of-sorts periods any of us face — middle school and puberty (see my post “Balkis Makeda’s 2nd Coming” from May ’11). Not good, as anyone who knew me during my A.B. Davis Middle School years can attest, for better and worse.

One of the most puzzling practices at 616 and even at the Hebrew-Israelite temple in Mount Vernon was in what my idiot stepfather and the rabbis would have us read. We read more than simply the Torah, the Prophets (or Nevi’im), the Writings (or Ketuvim) or the Talmud. No, on rare occasions, we cracked open the good old King James, and found ourselves in the middle of Matthew or Mark.

The passages that our fearless religious leaders assigned were very specific. They were only assigned for the purposes of showing us what ancient Israelite life had become in the centuries since the fall of the Kingdoms of Israel and Judah and the enslavement and scattering of the ten Lost Tribes. That was it. No discussion of Jesus’ miracles, his defiant sense of social justice and protest, his life, death and resurrection. The rabbis didn’t even publicly acknowledge Jesus as a prophet, much less the son of God.

I asked, more than once over those three years, “If we are Hebrew-Israelites, then why are we reading the New Testament?” I never got a straight answer. “Oh, Jesus is among the men of Judah, like Moses or Saul or David.” Or “Jesus was like a prophet, in the tradition of Jeremiah or Daniel.” Or “Because I’m the man of this house, and you do what I tell you to do, BOY!,” as  “Judah ben Israel,” my idiot stepfather, would yell.

I knew enough back then to know that the ancient Israelites, ten of those Twelve Tribes, were enslaved and dispersed during the time of the Assyrian Empire, not to mention the Babylonians that conquered the Assyrians. And all between 722 and 586 BCE. By the time the Persians freed the remaining two tribes (Judah and Levi) in 539 BCE, the others were lost to history. So why would Jesus be relevant in a religion based on the history of a group that was scattered centuries before Jesus was born? Why focus on the New Testament in low dosages? Why care about any passages from the gospels at all?

Fast forward twenty-eight years from my Christian conversion to the age of pseudo-Christian evangelical fundamentalism as a proxy for prejudice, hatred and fear. So much of this social issues garbage comes from literal Christian interpretations of the Old Testament. Last I checked, the Old Testament in question here is the Torah, and I haven’t met a whole lot of pastors or priest who are Judaism experts.

The burning of the knight of Hohenberg with his servant before the walls of Zürich, for sodomy, by Diebold Schilling (1482), February 17, 2005. (Lysis via Wikipedia). In public domain.

We’ve been fighting for half a century over abortion — which is essentially addressed for pro-life advocates in Exodus and Leviticus as “Thou shalt not kill.” Lethal levels of disgust and hatred directed at gays and lesbians because of three passages in Genesis, Exodus and Leviticus, and one of them over what amounts to attempted gang rape. Really? Our strength as Christians is defined by how well we understand and practice what’s in the Old Testament? Any Christian that believes that this is more important than the Gospels or Jesus’ charge to us to love our neighbors as we love ourselves is a really hateful person. Period.

Though Vice President Joe Biden forced his hand through his support of gay marriage on NBC’s Meet The Press this past Sunday, President Barack Obama did the right thing on Wednesday by outing his truer pro-gay rights and marriage self. You know, the president’s evolving view that took him right back to where he was in ’96. Still, it was a historic moment to see President Obama with ABC’s Robin Roberts proclaim his personal support for gay and lesbian marriage and LGBT rights in general.

But there are questions beyond the historical significance (see John F. Kennedy’s June 11, ’63 speech in support of Black activism and civil rights — on the eve of Medgar Evers’ assassination — for more) or the politics of making this announcement six months before the ’12 election. Like, why does anyone who isn’t gay care at all? Because a pastor who spends more time dealing in fear and misinterpreting the Old Testament says to care? Because you don’t want your hyper-heterosexual sense of masculinity (Black or otherwise) or femininity questioned? Or because you and other people in your life love using your Neanderthal sense of Christianity and spirituality as a club to bludgeon others, to blame others for your lot in life?

“Enthusiasms” scene screen shot from The Untouchables (1987), March 30, 2012. (http://loonpond.blogspot.com). Qualifies as fair use under US Copyright laws due to picture’s low resolution and cropped nature.

I don’t expect anyone vehemently on the other side of this issue to answer these questions, any more than I ever expected my idiot stepfather to explain why we studied the New Testament as practicing Hebrew-Israelites. I love Jesus and what and who he stood for and I believe would stand for today. But these so-called Torah-practicing Christians are very difficult to love.