McDonald’s signage, Austin, MN, May 20, 2006. (Jonathunder via Wikipedia). Released to public domain via CC and GFDL.

Do you remember those McDonald’s signs back in the ’70 and ’80s, before the corporation went global (from 6,000 to 30,000 franchises since ’92), where they said, “Over 100 Million Served” hamburgers or “10 Billion Served?” If the signage is there at all these days, it usually says “Billions and Billions Served.” That’s about as cheap as Black life is in the US as well, though maybe a bit more expensive in Western countries in general (they do use the Euro, after all!).

I’ve been thinking about the low value of Black lives for years, even in the middle of grad school at Pitt. But I must admit, it’s been on my mind more and more since George Zimmerman shot and killed Trayvon Martin nearly two years ago. Now, with the hung jury over the murder of Jordan Davis, with so many who find it easy to render Black and Brown lives cheaper than dog meat in the middle of the Roman Coliseum 2,000 years ago, it seems that there’s no such thing as a dead stereotype.

It’s so infused in popular culture, as life and art intertwine in a macabre dance on Black and Brown bodies. Blacks especially (and for the most part, Latinos) don’t feel pain the same way as Whites. We lack the emotional and psychological control of Whites. We’re irrational and prone to criminal behavior. We’re lazy and don’t mind living in abject poverty. We love illegal drugs, but love malt liquor and hard alcohol even more. We’ll eat anything deep-fried, and don’t mind dying before middle age just so that we can save the Social Security dollars for elderly White folk.

With that as the backdrop, it’s no wonder much of the movies, music, TV and Internet depictions of us ultimately ends in our gratuitous, ubiquitous and anonymous deaths. Yes, even in 2014! I’ve recently binge-watched the now defunct CW series Nikita (2010-14) with Maggie Q as the lead. I counted at least thirty Black actors on the series over its seventy-four episodes. Only two survived the series, and one (character played by Lyndie Greenwood) wasn’t even in the last two episodes because the actress was doing double-duty on FOX’s Sleepy Hollow!

But if anyone were to take some of the largest grossing films and franchises of all time, it would become obvious how cheap folks in the US and elsewhere think Black and Brown lives really are. Between Independence Day (1996) and The Terminator series of films (1984-2009) alone, you would have to assume that almost all of the forty million Blacks living in the US died in these fictional realities, not to mention the 1.2 billion folks of at least partial African descent living in other Western nations, Africa, the Caribbean, Brazil and the rest of Latin America. That this has occurred more than once in these films alone puts us at 2.48 billion Blacks killed.

Then, between lesser known/lesser quality films like The Day After Tomorrow (2004), Deep Impact (1998), The War of the Worlds (2005) and Hunger Games (2012-present), it would seem that in every global calamity, most Blacks draw the short straw. These movies (and, prior to these movies, books) put us easily over three billion Blacks and Browns killed. And that’s without accounting for standard action films, cops-and-criminals shows, and other cinematographic renderings of the Black and Brown as disposable human beings. Unless you’re Don Cheadle, Denzel Washington, Will Smith, Morgan Freeman (sometimes) or Halle Berry, if you’re Black or Brown, your job in popular culture is to die a violent death.

Of course, those upset with my sardonic take will say, “Well what about gansta rap? What about Ice-T, Ice Cube, Snoop Dogg and so many other rappers who present Black lives as cheaper than bottled water?” Three things: 1. you really need to update yourself on today’s rap, between Lil Jon, Rick Ross and Lil Wayne, before commenting; 2. the “gansta rappers” of the ’90s were mostly rapping about a lived experience, not some fantasy life; and 3. they figured out that they could and can make money off of Black deaths in lyrical rhymes, just like folks in the movie, TV and real worlds. 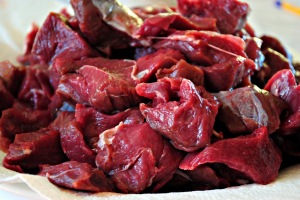 This will make the likes of George Zimmerman, Michael Dunn, and substantial numbers in the NYPD and LAPD happy. Actually, what would really make them happy would be a version of the movie The Purge (2013). But instead of crime and murder being legal for one day a year, they would have to get a “coon hunting” license to kill themselves a Black or Brown person one day a year. That way, they could keep our numbers low, just like hunters do with deer every fall.