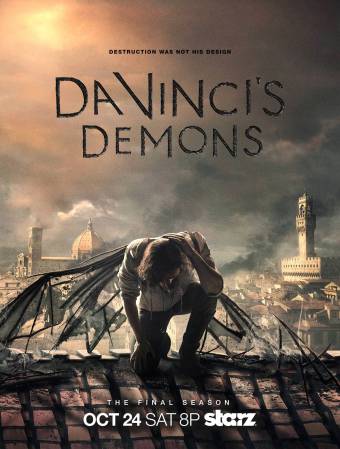 Da Vinci’s Demons Season 3 Poster, October 2015. (Starz via http://www.ew.com/). Fair use due to direct connection with subject matter and non-commercial use.

I finished catching up on the Starz series Da Vinci’s Demons over the weekend, which included me watching the final episode via Xfinity On Demand last night. I will not provide any spoilers. But, I am at a loss regarding the one constant with most period pieces or fantasy TV series and movies. I simply do not understand the need for a British accent in everything that isn’t American in Hollywood or its near-equivalent. If my understanding of history is correct, Romans didn’t speak in British English with English colloquialisms like “Needs must” or “bollocks.” Alexander the Great was never “knackered” or “gobsmacked.” And Leonardo da Vinci as played by Tom Riley saying “codswallop” or “fortnight” or any of a hundred British sayings with a nasally, pretentious accent is about as accurate as firing a shotgun at a barn’s broadside from 1,000 meters away.

In general, I love hearing and reading the differences in British and other forms of English when not spoken by Americans. With so many TV series and movies now done with international casts, though, it has turned into a form of cultural imperialism. Especially since I know that until two centuries ago, the average Brit sounded more like the average Canadian or American than like James Bond while attending Oxford. The change in accent was part of the United Kingdom of Great Britain’s rise to superpower empire status during the eighteenth and nineteenth centuries. Anyone who wanted to become part of the British gentry class — including newly monied industrialists and merchants — hired speech coaches to train them to speak English in the manner that we hear from most British English speakers in 2015.

Even with the rise of the US as the world’s leading superpower and its gigantic cultural and economic footprint, British English still is the language and sound of empire. At least where Hollywood is concerned. Because British English sounds imperial, high-class, important, urgent, and intelligent, according to the ears of many an English speaker, whether in the UK, the US, or elsewhere in the world. It doesn’t matter if the modern version of f–k didn’t exist until the eighteenth century. It doesn’t matter if some shows like Game of Thrones or movies like Lord of the Rings are complete fantasy and should have no adherence to any particular language or sound. British English is all that and a bag of chips, the cat’s meow, is dope for the English-speaking world.

For me, though, all I’m hearing with shows like Da Vinci’s Demons, Rome, Spartacus and The Borgias (the Showtime version), and with movies like 300 and Gladiator is a narrative framed by imperialism and the triumph of the West. It’s not just the British English accent and the imperialism it represents. It’s also how producers, directors, and actors consistently frame period pieces in the West vs. East, civilization vs. savagery narrative. Be them Ottoman Turks, Germanic barbarians or Persian emperors, they’re all simplistic antagonists for cinematic fodder that reinforces the West as good, godly and victorious. Or, rather, to quote Pittsburgh Steelers’ head coach Mike Tomlin, those without British accents are “the dead Indians” in these modern-day “cowboy” movies. 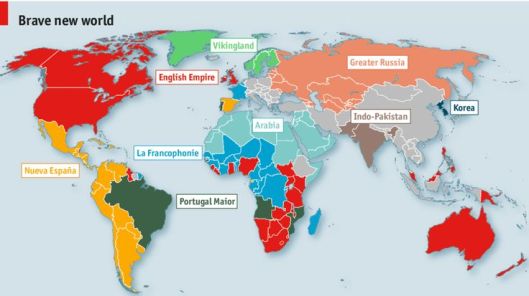 “Linguistic Imperialism” – what the world might look like if borders were based upon the 10 major languages, May 10, 2014. (The Economist via http://pinterest.com ).

And like Tomlin, in the case of screen entertainment, I’m kind of tired of the same theme running over and over again. Not only is depicting the Ottoman Empire or Achaemenid Persia as evil heathens when compared with Italy in the 1480s or Greece in 480 BCE a historical lie. It also reinforces the idea that when the West wields its power and imperialism, the world is always a better place. If the climate summit in Paris demonstrated anything, it showed how much damage the West has done to the world.

A century or two from now — assuming our globalized world doesn’t fall apart due to wars and climate change — entertainment will likely be highlighted with accents unfamiliar to today’s Western ears. Even if one of entertainment’s primary languages remains English, it will likely have another accent. Ace!