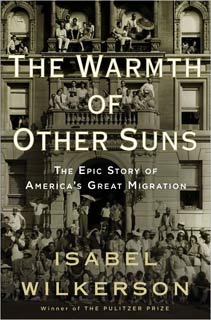 I’ve finally read Isabel Wilkerson’s book The Warmth of Other Suns (2011) this month, just as I finished teaching a mini-course in post-1865 African American history. If I ever have the opportunity again to choose my own books for a survey-level course in African American history, this would be one of my cornerstone books. I know I stand at the back of a very long list when I say this, but this is a wonderfully powerful and insightful book, with language and a writing style equally as tender.

This was what I wrote regarding my first impressions on Goodreads.com:

My God – this book is a masterpiece! Wilkerson has done what historians and writers as diverse and groundbreaking as Kenneth Kusmer, David Levering Lewis, Joe William Trotter, Jr., Nicholas Lemann, Thomas Sugrue and James Grossman couldn’t (and in a couple of cases, wouldn’t) do. She put flesh, blood and bones on the Black individuals and families who migrated “up North” and out West throughout the bulk of the twentieth century. She didn’t distract with neo-Marxist, post-modern, post-structural, proletarian, or other overly academic theories for understanding the “hows” and “whys” behind Black migration between 1915 and the 1970s.

Reading Wilkerson’s The Warmth of Other Suns (2011) was like reading into my own family’s pasts (my mother and father came to New York City — specifically, the Bronx (Pelham Parkway and Wakefield) — during the 1960s from Arkansas and Georgia/Florida before moving to Mount Vernon). She captured so well the aspirations, the inspirations and the trepidations of the people who migrated, and the things they faced upon arrival. Wilkerson, most of all, grounded herself in the scholarly, but weaved it into a story that was nothing less than literary. If you’re a US or African American historian, a Black Studies, Black Women’s Studies or American Studies scholar, you must incorporate in your curriculum if you haven’t already. If you’re a writer who aspires to tell an important story — one that educates as it entertains — then The Warmth of Other Suns is a great place to start and Wilkerson a great writer to emulate.

Wilkerson called the Great Migration one of the great events of the twentieth century. But it was more than that. It was one of the great events in American history, a silent and gradual revolution on par with westward expansion and more significant than the second wave of immigration from Southern and Eastern Europe to the US between 1870 and 1914. I and millions of others like me should know. I wouldn’t be writing at all if I wasn’t a child of two Black migrants who left farms in the South for New York City.