Not exactly the most precise title I’ve ever written. But it does get to a sensitive point for many involved in education and so-called  reform. Between Wendy Kopp and Diane Ravitch — especially since the publication of Ravitch’s latest and most comprehensive salvo Reign of Error a couple of months ago — it’s been hard for anyone to get a word on K-12 education into the national dialogue. Kopp’s running around ringing the educational Armageddon bell, while Ravitch has all but revealed the likes of Kopp, Michelle Rhee and Dr. Steve Perry as money-hungry reformers who wouldn’t know reform if it bit them in their derrieres.

The debate over high-stakes testing and anti-union teacher effectiveness models has put aside so many other conversations on improving K-12 education. So many that the average person may think that test scores and teacher training are the only issues on the table for reform, whether from the perspective of false prophets like Kopp or actual experts like Ravitch. For me, the one effort that has been neglected over the past decade and a half has been one to diversify the teaching profession, on the basis of race, gender and even levels of expertise.

It’s taken my son’s five-plus years of education in Montgomery County Public Schools to fully appreciate how unique my own time in an integrated school setting in Mount Vernon, New York truly was. From first through sixth grade, at Nathan Hale and William H. Holmes Elementary Schools, four of my six teachers were African American. But it wasn’t just that they were Black. The one thing that Ms. Griffin, Mrs. Shannon, Mrs. O’Daniel and Mrs. Bryant all had in common was their high expectations of me and my classmates. They were kind, but also no-nonsense teachers. They gave me a hug when I needed one, and a slap on the butt (in O’Daniel’s case, nearly literally) when I needed it.  By the way, they frequently made school fun, too.

They also dared to venture beyond the state-mandated curriculum to infuse it with materials about everything from Black history to the Maya, from reading our standard textbooks to encouraging us to discuss the Camp David accords (Menachem Begin, Anwar Sadat and President Jimmy Carter) and the Iran hostage crisis. Mostly, I learned more about what I’d face from the world in terms of race, gender and class from these teachers than from all the rest of my teachers combined (other than Harold Meltzer).

I would’ve liked some more male teachers of color, particularly once I became part of Humanities at A.B. Davis Middle School in seventh grade. In fact, between Dr. Larry Spruill and Dr. Hosea Zollicoffer, they were really the only Black male teachers/administrators I saw between end of sixth grade and my junior year at the University of Pittsburgh, a span of almost nine years. As it was, administrators and teachers like my seventh grade math teacher Ms. Simmons, along with Brenda Smith, Spruill and the handful of other I encountered often looked at me as if I was the cursed Son of Ham, or, rather, some weird version of whom they considered Black. At least, respectable and Black. Still, they served as reminders that not all teachers were White and female, if only that. (But, I digress…)

Now, I know what some of you may say. It shouldn’t matter what the race of the teacher or administrator is, as long as they care about the students. That The New Teacher Project (founded by Rhee) and Teach for America (founded by Kopp) provide alternative opportunities for professionals of color to enter the teaching profession. No they don’t. Not really. They provide an elitist version of Peace Corps for impoverished urban and rural school districts for folks who often do not stay in teaching for the long-term (beyond four or five years), only to then move on to graduate school, law school or Wall Street. 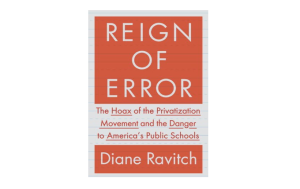 My teachers to a person remained teachers until they received promotions, retired or passed away. But they could stay teachers (and later become administrators) because they weren’t trying to reform education. They saw themselves as part of a larger community, helping to nurture children, not just educate them. They had the autonomy and parental support necessary to do so. And they didn’t have an atmosphere where they lived in fear of their jobs in case the students’ SRA scores dropped between 1979 and 1980 or between 1980 and 1981.

Despite my experiences and the experiences of my generation of students, the money grubbers of K-12 education reform will continue to insist that public education is at Def Con 1, and that we should launch our proverbial nukes in a pre-emptive strike to reform it. The sad truth is, in places like Texas and Philly and Chicago, their warheads have already gone off, irradiating school districts, poor students and students of color alike. And all without dealing with issues involving poverty and diversity in the process.