Back in the days when The Atlantic Monthly was really humming with cutting-edge articles, New America Foundation founder and former president Ted Halstead’s “A Politics for Generation X” appeared in the magazine’s August ’99 issue. In his piece, Halstead wrote, “Xers appear to have enshrined political apathy as a way of life….” and “are considerably less likely than previous generations of young Americans to call or write elected officials, attend candidates’ rallies, or work on political campaigns.” This was part of a much larger piece on the lack of Gen X political knowledge, participation and activism, and served as a bedrock article for the civic engagement community for most of the ’00s.

For many, Tuesday’s midterm elections and the utter lack of participation of eighteen to twenty-four year-olds (folks born between ’86 and ’92, roughly, anyway) reflects Halstead’s words of wisdom and sobriety. Only nine percent of eligible Gen Yers voted in Election ’10, fully half of the number who came out overwhelming for President Barack Obama in ’08. Gen Xers came out in larger numbers, but still didn’t touch their near three in five eligible voter participation from two years ago.

How terrible, the scholars and pundits have said. From Keith Olbermann and Howard Fineman to Donna Brazzile, Melissa Harris-Perry and so many others, the reasons varied. It was the anger and disgust over being saddled with student loans and graduating college with no jobs available. Or it was the demobilization of the millions of folks kept active by the Obama campaign machine in ’07 and ’08. Or it was because President Obama had used up all of his political capital on a year of healthcare reform, with unclear benefits or with benefits that wouldn’t kick in until ’14.

While I’m sure some of all of this is true, all of the commentary and analysis reflects a bit of disconnect 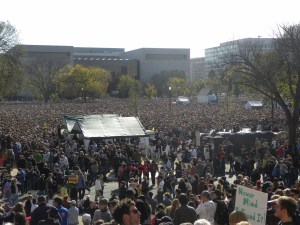 and condescension. The folks invested in politics can’t truly understand why millions of adults under the ages of twenty-five, thirty, and even forty find traditional American civic engagement about as vital as the Spanish Inquisition. Condescending because those with any voice in the public arena and around politics act as if those who choose not to vote are the reason for the bad politics we have in our wonderful country.

Pulling out the old “people marched and died for your right to vote,” as true as that is, is about as effective in mobilizing these voters as Sarah Palin is at appearing as intelligent as my seven-year-old son. Saying that voters who don’t vote “get the government that they deserve” only serves to prove the point of the most jaded among us. None of this works, and it hasn’t worked for the nearly four decades since the Twenty-Sixth Amendment passed in ’71.

Here’s the real truism of generational inactivity at the polls and in the campaign offices. As a group, the voters under forty see American politics as opaque, out of touch, corrupt and heavily influenced by corporate and moneyed interests. More than eighteen years ago, a friend of mine at Carnegie Mellon got into a debate with me about campaign finance reform and how then Democratic presidential candidate Clinton needed to make this the centerpiece of his platform. That didn’t happen. 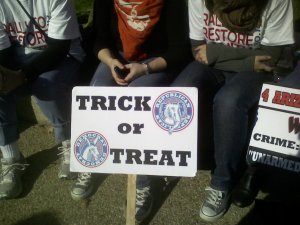 But he was correct. The process — despite the passage of McCain-Feingold in ’02 and because of the Supreme Court’s decision in favor of unfettered corporate contributions earlier this year — is more corrupt and secret than it has been before. Transparency International’s 2010 Corruption Perceptions Index ranks the US twenty-second in levels of corruption and transparency, putting us between Belgium and Uruguay. This isn’t a joke, but those of us under forty see our political process as one.

One thing for the expert class in American politics to think about — especially those of us who see ourselves as progressives or liberals — is a Biblical truism about being “doers of the words, and not hearers only.” What does this mean in the context of this post? Well, on Tuesday and Wednesday morning, I left before 7 am to vote one day and to pick up some groceries the next. I bumped into City Year workers — so-called young people — on those days, rising early to do their good works, to engage in meaningful work, to — dare I say it — change the world.

Voting for the younger adults in this country is hardly enough, because they don’t see it as making any more difference than dumping salt in the Atlantic. Volunteering for campaigns, for people who could get caught in a scandal at any moment? That’s a ridiculous idea. Working and doing good work to change peoples lives, however, is much more meaningful, and less fraught with scandal, corruption and hypocrisy than coming out to vote for candidates of two parties seemingly the puppets of K Street and corporate interests.

Until the poets, priests and politicians of our era get that, we will continue to see the politics of the foolhardy. For the people who aren’t voting may be acting out of a wisdom that the experts don’t understand.