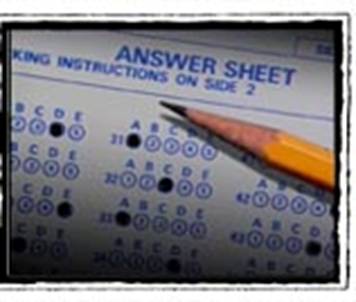 This really is the testing season, isn’t it? In many more ways than one. For voters, the underemployed and the unemployed, the welfare poor, for undocumented workers, for the Obama Administration, for so many others. But the testing season I’m talking about is standardized testing. Between the SAT, GRE, LSAT, MCAT, GMAT, and ACT, high school students and college undergrads face incredible amounts of stress over a five-decade-long practice that, in the end, reveals more about the system of competition that technocratic university administrators and eugenics-type scientists have created than it actually does

about our own abilities.

My own standardized testing history includes the following (not counting the AP or New York State Regents exams, which occur in May and June, another testing season), starting with elementary school:

1. SRAs (1st through 6th grade – ironically, started by Lyle Spencer, who also founded the Spencer Foundation, which sponsored my doctoral dissertation research in 1995-96)

My highest score on the SAT — 1120 (540 Verbal, 580 Math). My highest score on the GRE — 1730 (530 Verbal, 580 Math, 620 Analytical). On the LSAT, I scored in the 50th percentile, not bad for someone who studied for it for only two weeks. What does any of this prove in the whole scheme of things? Nothing, really. If these scores were truly great predictors of future academic performance, then Harvard, Yale, Princeton and Carnegie Mellon should have graduation rates approaching 100 percent. Which would explain why many elite institutions have either downgraded their use of these tests in their admissions formulas, or in the case of the big three and UC-Berkeley regarding the SAT, are barely using them at all.

But for most colleges and universities, these tests are a critical factor in a student’s acceptance and enrollment. They are a necessary evil for figuring out who has academic potential and who doesn’t, at least according to ETS and admissions directors. Which is why I still don’t understand why educators and other folks haven’t taken former ETS vice-president Anthony Carnevale’s work around “strivers” seriously. Or, rather, I do understand. Why give someone like me a leg up because my SAT score was an 1120 — giving my score more weight than a 1280 score for a White kid from a middle class background? All scores are equal. That’s why we call them standardized tests, a standard that doesn’t measure up to the realities of earning a degree.

I guess for those I know who are rolling into these exams this fall (and in some cases, before March or April), the best advice I can give is to get the best score you can. But don’t despair if your scores are only in the 51th, 64th, or 74th percentile, like mine were on the different sections of the GRE. What will ultimately matter is how you perform after you’ve been accepted by and enrolled in that institution.

I’ve given some thought to going back to school in the next couple of years, possibly even law school. Not to become a lawyer, but to make myself more marketable outside of academia and within the philanthropic world. For some odd reason, there are lots of people with law degrees who are working in education reform, international development, and social justice. Go figure.

But even this professor will likely have to take the LSATs again in order to apply to a law program at Georgetown, UPenn or some other school. And that will mean trying to figure out why A and B won’t sit together at the same conference table, but B can sit next to E, except when meetings are held on Tuesdays.