For the past few weeks, we’ve watched an NFL lockout and the political theater of a debt ceiling impasse play out in Washington, DC. Both have captured so much of the media’s attention that when an explosion occurred in Oslo, Norway on July 22, it initially ran as a ticker report on MSNBC and CNN (thank God for the BBC, then). It’s been Goodell v. Smith, POTUS v Boehner for most of May, June and July.

At least until Monday afternoon. When the decertified NFLPA unanimously agreed to continue the practice of compromising away their collective bargaining power to create significantly better employment conditions and even better pay for all of its players in order to make some money now for a chosen few. But none of that mattered. Everyone was giddy over the start of “real football” again. With wall-to-wall coverage on every cable sports channel, as well as not-so-insignificant attention on cable news. Players were hugging owners. And there were reports of a Washington Redskins trainer jumping into the arms of an ESPN 980 beat reporter on Tuesday after their facilities opened. Our long, 133-day national nightmare was over.

Well, not really. Not with the US Government three days away from defaulting on $14.3 trillion in debt 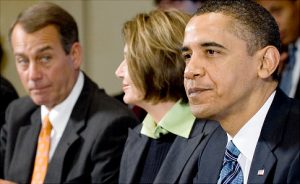 For many, it appears that President Obama is all but ready to give him many of these cuts in Social Security, Medicare and Medicaid. Provided that there isn’t a balanced budget amendment component in the plan. Even the idea of raising taxes on those who’ve robbed our nation blind and want to keep their riches has been given short shrift by Congress and by our news media.

What makes this situation as shitty as it sounds is the fact that this argument is occurring in what is officially a double-dip Great Recession and the most sluggish recovery in the US since the 1930s. Republicans think they’ve figured out a way to corner the President and the Democrats while simultaneously holding up principles they never had during the ’80s and the ’00s. President Obama’s been stomping around like he has an ace up his sleeve, but refuses to clue the public in on what he plans to do by August 2 if his repeated attempts at so-called bipartisanship fall apart with our struggling economy.

This is a serious situation, and it does have parallels with the NFL lockout. In both cases, billionaires have leadership in their pockets to keep the masses from getting a nanometer of what they need and want. In the case of most NFL players, who get pounded over and over again for a median salary of $325,000 a year, better pay, much better working and safety conditions, and better collective bargaining conditions. In the case of most Americans, some sense of economic stability, government responsibility and affluent Americans and greedy corporations paying their fair share in taxes.

But this is where the similarities end. The fact is, many an American tuned out the stalemate on Capitol Hill the moment Rich Eisen asked, “Are you ready for football?” Monday afternoon on the NFL Network. I mean, who cares that social welfare in this country, fairly meager to begin with, will be slashed severely? While the military-industrial complex and the Pentagon get a budget level that’s higher than over ninety percent of the economies in the world? Who cares that if the federal government doesn’t pay its bill, millions will be out of work, and the unemployment and other monies we all receive will be worth less, and could become worthless?

None of that’s important in our world of idiot, imperialistic, and secretly greedy Americans. “Give me football, give me football!,” is our cry. Let’s complain about Kevin Kolb’s contract with the Arizona Cardinals, and not Boehner’s contract on America. Let’s decry a standoff between billionaires v. hundred-thousand-aires. But remain as silent as tranquilized sheep while Congress and the President take our futures into the event horizon of a black hole. Is the mantra of it only takes hard work to become rich in America so strong that people who aren’t don’t know when the shepherd’s about to slit their throats? Yeah, I think so.