The Road to the University of Maryland President's Residence, June 11, 2010. Donald Earl Collins 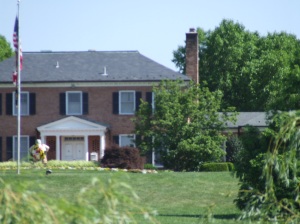 Three years ago I did an interview at the University of Maryland for a director position with their National Scholarships Office. It was a day-long interview that went from 9 am until 6:30 pm, meeting faculty and administrators throughout the nine-and-a-half-hour process.

It was one of my best interviews. I didn’t feel like I made any obvious errors, and I genuinely liked all of the people I met that day. But there was one question, one topic, that felt out-of-place, awkward, even stupid as part of the discussion of this position. It was the question, “If you get this job, can you guarantee that the University of Maryland will have a Rhodes Scholarship winner in five years?”

I was almost speechless after hearing the question. Not because I didn’t have confidence in my abilities to detect academic excellence or strong leadership skills in students. Not because I didn’t think I could handle the job. Mostly, I just thought that it would be ridiculous for any responsible professional to guarantee a prize like a Rhodes Scholarship based on variables beyond their control. “I can guarantee that I can get more students into the pipeline for a Rhodes, but I think it would be foolhardy for me to guarantee that I could get a Rhodes Scholarship in two or five years.”

The conversation continued over the next fifteen minutes between me, another director and two deans. I discussed other important scholarships and fellowships. Fulbright. Truman, Mellon Mays, Ford Foundation, and so on. But the conversation returned three times to the mandate of then President Mote and his emphasis on raising Maryland’s prestige by having a student win a Rhodes Scholarship. After all, the university had not had a Rhodes Scholarship winner since basketball star Tom McMillen won the award in ’74. One administrator actually said, “We see no reason why we couldn’t do as well as the University of Michigan.”

I thought, “Wow! He said that with a straight face!” I couldn’t believe what I was hearing. It was as if I was listening to my ex-stepfather talk about how great a father he was while his kids were running around 616 with graying drawers and grumbling stomachs. Given the state of the scholarships office at the University of Maryland, they weren’t ready to compete with the University of Pittsburgh yet, much less the most prestigious land-grant public university in the country, and arguably the world. I graduated with and found myself in the same classes with one Rhodes Scholar when I was an undergrad at Pitt, and knew a finalist for the scholarship when I was a grad student there as well. And Pitt had nowhere near the academic reputation in ’91 or ’94 that it had earned by 2008.

I nudged the administrators who were interviewing me to think more systematically about how the scholarships office at the University of Maryland should go about setting goals. That a university must build its reputation for high-achieving students over time, so that its Rhodes Scholarship candidates will survive to at least be finalists in the process. That our competition was more the University of Virginia or University of Delaware or even Johns Hopkins before setting goals on par with the University of Michigan.

I obviously didn’t get the job. Given that conversation, though, I wasn’t sure if I wanted the job. The university found someone who had previous experience working in a university scholarships office. As with most staff positions at universities, experience working as a staff member (considered different from faculty, in case folks don’t know the difference) is more important than nonprofit management or academic teaching experience. I was definitely disappointed.

Still,  I wanted the challenge of creating a more academically enriching environment at the University of Maryland. And after three years of teaching in the University System of Maryland (via University of Maryland University College), I’ve taught enough College Park students to know that much work remains to create the kind of university necessary to produce Rhodes Scholars. Who knows? Maybe Maryland will have its first Rhodes Scholar recipient in thirty-seven years this spring. However, given the split personality of both the campus and the academic culture there, I seriously doubt it.