Pork Egg Rolls (like the ones Papa Wong’s once made), Golden Gate Restaurant, Wyoming, MI, December 6, 2008. (stevendepolo via Flickr). In public domain.

Poverty influenced so much of my worldview in the years prior to finishing my doctorate. Including my taste buds. I’m sure that if I used my taste buds today to evaluate the Sicilian slices I used to eat from the pizza shop on East Lincoln, I’d throw it in trash and demand my money back. Yet I could say at thirteen — and say now at forty-three — some foods stand out more than others, foods that I haven’t been able to find anywhere else. In the case of these Mount Vernon/NYC foods, I really can’t go home again.

Eating at Papa Wong’s restaurant on Gramatan Avenue was a real treat for me even at seven or eight. They had great egg rolls, pork, shrimp and chicken fried rice. I loved the place. It smelled the way I thought a Chinese restaurant ought to smell. Ginger, sesame, soy, onions, scallions and garlic. It’s too bad the restaurant burned down suspiciously in ’82, with nothing to replace it with but a parking lot for nearly a decade afterward. The circumstances behind the fire — as with so many on Gramatan and South 4th Avenue in the ’81-’84 period — remain suspicious to this day.

There was also good eating for me at Arthur Treacher’s Fish & Chips on Prospect and Park before it closed down that corner for two years at the end of ’82. I loved their crispy chicken medallions with the chips — awesome! Carvel’s Ice Cream shop a block west on Prospect was also a good place to eat, even if the customer service sucked more times than not. I think I drove myself to lactose intolerance about five years early because of that place. Man, I miss those chocolate-on-vanilla ice cream sandwiches!

Chocolate Honey Dip Donuts (not quite like the ones Clover Donuts used to make), March 6, 2013. (http://honeydewdonuts.com).

But nothing for my precious few dollars topped Clover Donuts. If you could take a Krispy Kreme glazed and genetically cross it with a Dunkin Donuts glazed, you’d end up with the best glazed donut ever! And that’s exactly what Clover Donuts sold. Not to mention those juicy, grilled and amazing Sabrett Hot Dogs. It was all a “kick in da head” for me growing up. On almost every visit I made to Mount Vernon after I went to the University of Pittsburgh, I made a stop there for a glazed donut, their nugget-y yet soft chocolate glazed donuts, and a hot dog. I might’ve not liked many things about Mount Vernon, but Clover Donuts was one thing I really enjoyed.

By the time I hit my mid-teens, though, I realized that Mount Vernon’s food had changed, and not for the better. Papa Wong’s was long gone, and so was Arthur Treacher’s. My home life at 616 meant that most of my shopping time was spent in Pelham at C-Town or in one of their inferior eateries. The pizzerias made slices that varied from absolutely sucks to pretty good, but were common and unimaginative enough that they blended together for me. At Mount Vernon High School, the deli in nearby Chester Heights easily surpassed anything I’d eaten sandwich-wise outside of the city.

Speaking of, going down to 241st in the Bronx, and then to Manhattan, changed my view of food for good. My years working with Jimme and Darren in Midtown, on the Upper East and Upper West Side, near Spanish Harlem on 90th and around Lincoln Center introduced me to great delis and bodegas. The best deli food I ever had from one at the crossroads between Broadway and Columbus between 65 and 66th Street, across from Lincoln Center. The smell of pastrami sizzling on the grill, the thick cuts of turkey and corned beef, the interracializing of cookies, my first taste of a blondie. It all happened there for me in ’84 and ’85, and sorry to say, I was spoiled by that food. Unlike the food I find outside of my kitchen these days (see my post “Washington, DC – Where Bad Food Abounds (DC/MD/VA)” from last month). 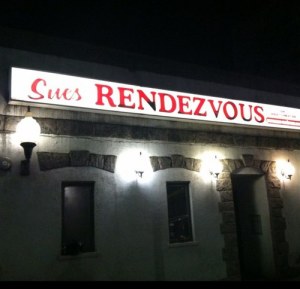 It’s safe to say that these experiences had as much of an influence on what I eat and what I like to cook as growing up with a great cook in my mother at 616. I’d love to add Clover Donuts’ glazed donut and chocolate cake donut recipes to my repertoire. Not to mention those super-crispy pork egg rolls from Papa Wong’s.  I loved it all, and I miss them all as well.