I have said in many a blog post over the past four years how narcissistic our people are in this age. But with the recent uncovering of the extinction-level-event involving a serial child rapist and the decades-long covering for Jerry Sandusky at Penn State University has come something somewhat more subtle. A number of journalists and commentators have discussed the “bubble” that has existed at Penn State for years, the one that allowed for a group of high level of administrators to cover up at least one crime.

But the bubble is much more than covering up or denying the existence of a pedophile on a university campus. It’s how Penn State’s leadership has dealt with the world inside and outside of central Pennsylvania. Their commitments of support for two administrators who perjured themselves about what they knew regarding Sandusky’s child rape activities on Penn State’s campus in ’02. Their surly answers and vague statements to the media about the status of coaches or the football team. The three days it took Penn State’s Board of Trustees to respond to the national media crush that came with Sandusky’s arrest and release of the attorney general’s grand jury report with a statement and the firing of the university president and Joe Paterno. 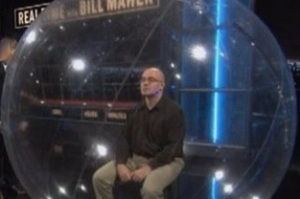 And — even above Joe Paterno dictating his retirement terms to the Board of Trustees — Sandusky and his creepy lawyer Joe Amendola’s crash-and-burn defense of the pedophile’s “horse-play” actions via Bob Costas and Rock Center on NBC on Monday. It’s as if Sandusky, Paterno, Amendola and the interim head coach Tom Bradley expect their one-off communiques and non-committal pressers to keep the national and international media away. Kind of like they way they’ve been operating their little fiefdom for the past half-century, by stonewalling and intimidating local media and local authorities.

This bubble, though, isn’t limited to an institution as insular as Penn State. Because our nation has been a superpower for so long, our narcissism has allowed the rich, famous and powerful to create lots of bubbles. Even when folks have wanted to be in touch with the rest of the world, with the common folk of our society, their bubbles have made their interactions awkward and elitist, and have created their own set of problems.

We can start with President Barack Obama. Despite all of his oratory powers, his keen powers of intellect and insight, and his well-connected handlers, POTUS 44 is in the ultimate bubble, as out of touch with the American public as any of his post-World War II predecessors. A president that rode in on a populist wave in ’08, Obama has been all but disconnected from the Occupy Wall Street movement that was sparked — at least in part — by his brief moments of energy on behalf of the jobless in August and September. The bubble allows even someone as bright as Obama to become deluded in his mission, to fall into the grasp of political and corporate interests, even as he works for the American people. 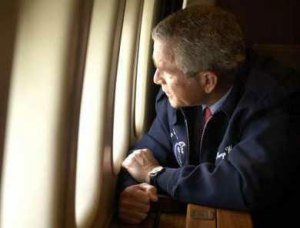 POTUS 43, the man in the ultimate bubble, at window on Air Force One during fly-over of Katrina devastation, August 31, 2005. (http://Politico.com). In public domain.

The mainstream media, colored as it is these days by the green of corporate and affluent interests, is also in its own bubble. They are so far removed from the pulse of the American public that even the “man on the street” interviews done by local news reporters seem staged. They talk mostly to themselves, and are so enamored with their own intellect that even most scholars in academia think journalists are arrogant.

There’s a reason why the media slants everything to look like two equal and opposite sides, no matter the moral imperative to tell the truth. Which, by the way, is the raison d’etre of the Fourth Estate, no? They go through Hell itself to find an opposing side to counter the overwhelming evidence of climate change, or bring in Sandusky’s lawyer — a man with a sordid sexual history, knocking up and marrying a sixteen-year-old client of his — to counter charges against a serial child rapist (alleged). All in the name of objectivity, as subjective as an art critic at an Andy Warhol show.

The mayors of New York, Portland, Oakland and other places are in their bubble of shunning protests that last longer than a Grateful Dead concert, more interested in protecting the interests of their corporate and rich individual buddies than the public at large. And the police? Their bubble is one that allows them to see everyone as the enemy. Their slogan might as well be “To protect and serve — as long as you’re rich or a corporation.”

Protests, sit-ins, revolutions. They all burst bubbles, and put even the most insulated in touch with the pain that ordinary folks feel. That’s what the powerful and rich fear most. And that’s why more of us need to walk around with our proverbial toothpicks, ready to pop as many bubbles as we encounter.