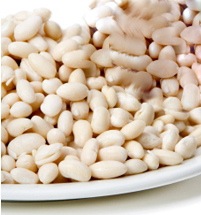 Great Northern Beans (they never looked this good growing up)

I wrote this six years ago, but I realized this week that the thirtieth anniversary of my last bout of physical abuse at the hands of my now deceased stepfather was upcoming (which I didn’t include in Boy @ The Window). Wow! There are moments that I can’t believe I survived all that.

It’s been twenty-eight years since I unwittingly carried a $10 bill halfway hanging out of my right hand for a hoodlum named “Pookie” to steal at Wilson Woods Pool in Mount Vernon, leading to so many evil things occurring in my life. But I’ve talked about this already. I’ve talked about my idiot ex-stepfather Maurice Washington and his equally idiotic attempt at making me a man in his own decrepit image. I’ve even talked about the domestic violence that I was exposed to first and second-hand by him. What I talk about now is a variation on a theme, and a story that won’t be in Boy @ The Window — it would disrupt the flow of the period of time in question.

It all started with the usual at 616. It was the end of January ’86, and we were short on money. It was the middle of the week, so it wasn’t as if I could track down my father Jimme for a couple of extra bucks. So my mother, out of a rare sense of desperation — since there wasn’t any food to eat at 616 — turned to my then stepfather for help. As par for the course since ’83, his response was to call me over. “Boy, go get some Great Northern Beans and rice,” he said. It was the eighth occasion in five years that he had paid for a meal for the family — which only happened to include four of his kids, and he chose the cheapest thing he could think of.

“That’s it? That’s all we get?,” I said in response to his wonderful act of generosity. “Boy, I feed my family,” the lipid-laden idiot said. Being an idiot myself for a moment, I said back, “All you’ve ever done is just buy a couple of meals!,” as I turned around to go to the store.

Maurice jumped me from behind, knocking me head-first into the kitchen wall, and just kept punching me. He got me twice in the mouth. I obliged by covering up and then biting down on his knuckles on the second mouth punch, which caused some cuts and bleeding. My mother walked in and got between us. For once, the dumb ass had nothing else to say. He was angry and breathing hard, as if he’d been in a three-rounder with Mike Tyson. I was stunned, but I stood my ground, with my fists balled up. After scowling at the fool for a few seconds, I left for the store. 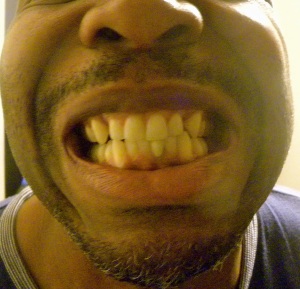 this day. My stepfather chipped my upper front tooth on my right in two places, and caused enough damage to one of my lower front teeth that I would eventually need a root canal done on it seven years later. So yeah,  I should’ve kept my mouth shut — literally — when it came to issues with my abuser.

On the other hand, given our unhealthy obesity times today, Great Northern beans and rice isn’t such a bad meal, right? For vegans, I’d imagine that this is a very good meal. But not when the person you despised most in your world when you were a teenager’s buying it, and buying it in a begrudging and miserly way.  Of course, now beans and rice are actually expensive and considered healthy food by the arugula-eating sector of our society. Go figure!

The kicker, though, came the Monday after this last incident. I’d completely forget that I was supposed to do an oral presentation in my 11th grade English class, first period. Completely. And this, I did write about in Boy @ The Window:

For Mrs. Warns’ class, we had a presentation assignment that I didn’t even remember existed. The first day of presentations came, and she designated me as the first presenter. I was caught completely off-guard. I didn’t have time to whip up something, so I did the only thing I could think of. I balled up a piece of paper like I normally did a few times a day, stood up and walked to the front of the classroom. I took a shot at the garbage can and missed like I usually did, this time deliberately, and proceeded to ramble for a couple of minutes about how to recover from mistakes when you make them or something. Mrs. Warns was so cross with me. “I’m very disappointed in you. You obviously didn’t prepare at all for your assignment,” she said in her Brooklyn accent. She gave me a D for my presentation, adding “and you should feel lucky to get that.

I found out later that our eventual salutatorian had gotten an extension for his presentation. I was more mad with myself than anything else, knowing unfair things had always been in my life to that point. Today, I could take the garbage can and put it upside my teacher’s head, take the balled-up paper and throw it at my former classmate, and find my ex-stepfather’s grave and piss on it. Of course, I’d have to have some Great Northern beans and rice first, so that I could give the obese idiot a good fart as well.