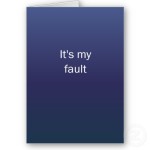 Friendships, relationships and acquaintanceships are strange stuff, especially in the younger years, and even more especially at the end of high school. So many of the people I thought would be friends or lovers forever had relationships that came to a crashing end my senior year at Mount Vernon High School. One friendship in particular between two eventual doctors crashed and sank in the spring of ’87, dragging me in its undertow in the process. I ended up in a fight with one of the friends, an acquaintance since third grade, whom I’m calling ‘D’ for the purposes of this post.

A week before MVHS’ senior awards ceremony, we had a dress rehearsal in the auditorium after school. I was rushing from my locker to the rehearsal area and bumped into D, who apparently was talking to another classmate in the hallway. As I’d been doing for more than three years, I was walking at warp factor three past D when I decided at the last second to tap her on the shoulder and say “Hi” for a second. I spun around so fast that I never got my arm extended, the momentum carried my right hand onto the side of her hip and butt. I was immediately surprised and embarrassed, and started to apologize without thinking. D looked somewhere between angry and confused. She kept saying, “I can’t believe you did that,” as if I was actually trying to get her attention that way.

“Why, I never thought you would do such a thing to me!”

“I wasn’t trying to slap your butt. It was an accident. I’m sorry.”

“Of all the people, I wouldn’t expect this from you!”

“I just can’t believe that you would do this to me!”

I got angry myself at that point. I took my hand, and I slapped her across her left butt cheek, this time deliberately.

“Now you know what a real butt slap feels like!,” I said while in mid-slap.

D immediately tried to slap my face, first with her left hand, then with her right. I caught her left and right arms and held them together, but not before the concussion of her fingernails from her left hand had hit my right cheek. I then let D go, and walked away with the thought, “How did this happen? I was just trying to say ‘Hi’.” This was the last time I really laid eyes on the woman.

I felt bad about what happened, but I also felt like I’d been put in an impossible situation. No matter what I said, I would’ve been wrong. If I’d said, “Look D, my only school interest is Crush #2, no one else, so accept or don’t accept my apology and move on!,” I would’ve hurt her more than any sting I left on her ass. If I refused to apologize, I’d been wrong too. The only thing I could’ve done was to walk away without discussing it at all. No matter what I could’ve done to limit the damage, I realized that somewhere in my unconsciousness was both a sense of compassion and contempt for D, a little girl who wasn’t so little anymore but seemed desperate to crawl back into her shell of shyness.

Regardless of what happened on that day twenty-three years ago, I’m truly sorry. To D, please accept this humble apology. It’s not right that I responded to an accidental tap by giving you a real one. You had enough problems to deal with without dealing with my silliness at the end of our senior year. I hope that you’ve found some measure of peace within yourself and in your world since ’87.